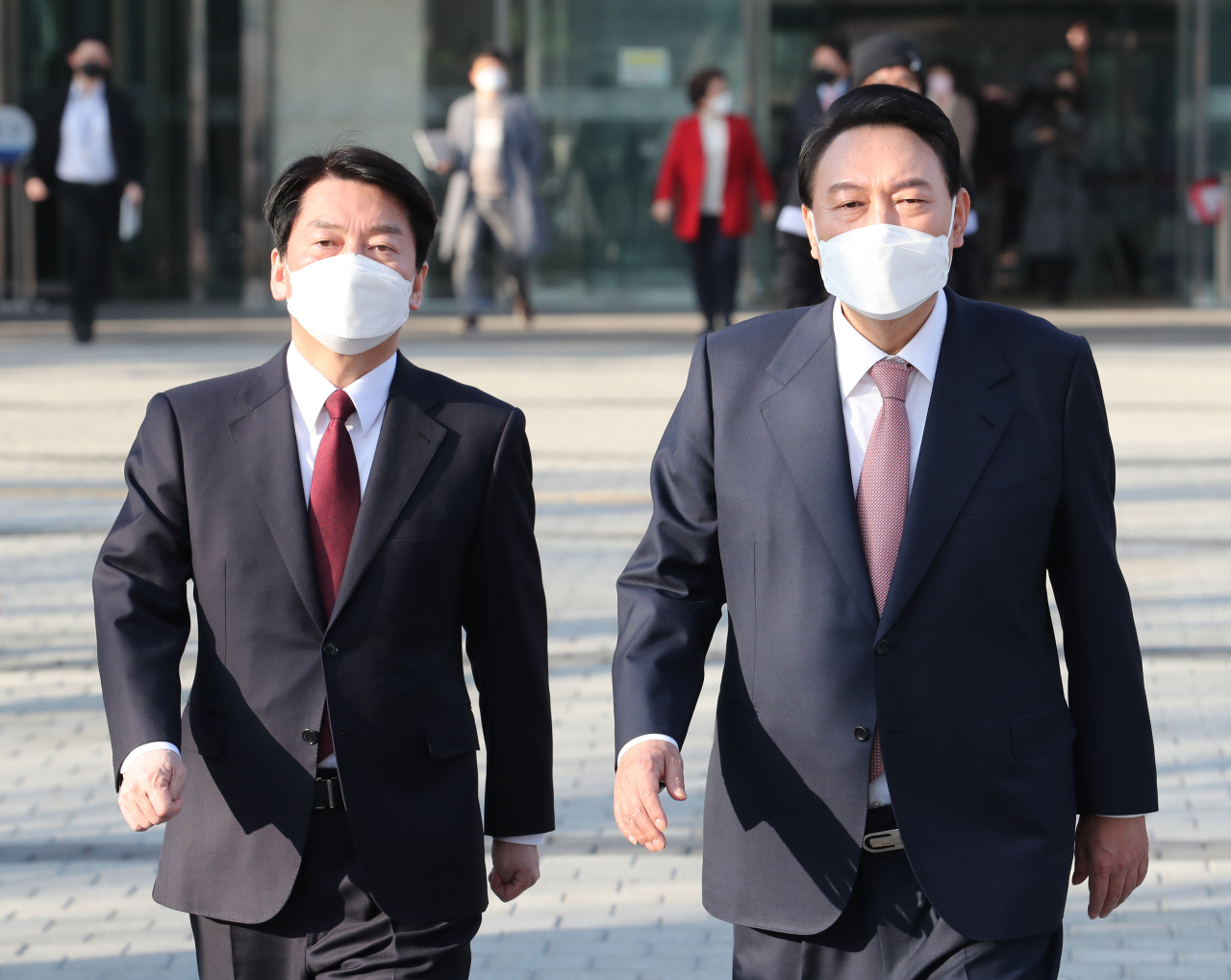 Presidential candidates Yoon Suk-yeol of the main opposition People Power Party and Ahn Cheol-soo of the minor opposition People’s Party walk together after announcing their campaign merger at the National Assembly on Thursday. (Yonhap)
The two leading opposition candidates for the presidency, Yoon Suk-yeol and Ahn Cheol-soo, merged their campaigns Thursday in a dramatic turn of events, just a day before early voting was to begin.

In a joint statement, Yoon of the main opposition People Power Party and Ahn of the minor opposition People’s Party said they have decided to merge their campaigns in pursuit of regime change. Ahn withdrew his candidacy, declaring his support for Yoon.

“Today, I, Ahn Cheol-soo, and Yoon Suk-yeol have decided to join forces to better pursue regime change. ... I have no doubt that we will be able to shift the power (from the ruling bloc), by our unification,” Ahn said, reading a joint statement.

“We are one team. We will fill in for each other in what we lack to realize the regime change. With a capable and prepared administration, we will launch a successful government.”

Ahn submitted his resignation to the National Election Commission later in the afternoon.

Vowing to create a government that would unite the people, the two candidates said they will merge parties and form a joint presidential transition team if Yoon is elected president.

Grasping hands, the two bowed and apologized for the long delay in reaching an agreement.

Both Yoon and Ahn had proposed a campaign merger in order to vie against the ruling party nominee Lee Jae-myung. But weekslong negotiations had dragged on and turned to public disputes, as they failed to come to a compromise.

The merger comes on the eve of the two-day early voting that begins Friday, and six days before the presidential election on Wednesday.

With the unification, the duo seeks to raise the chances for Yoon and the opposition bloc in a tight race against Lee Jae-myung of the ruling Democratic Party of Korea.

After their merger declaration, the two explained how they were able to come to an agreement.

Yoon said he had met with Ahn from midnight until 2:30 a.m. before they were able to reach an understanding. Their two negotiators, Rep. Jang Je-won of the People Power Party and Rep. Lee Tae-kyu of the People’s Party, were also present. They met at the house of Rep. Jang’s brother-in-law, who has close ties to Ahn.

Ahn said he chose to withdraw his initial suggestion of running a public primary as there was not enough time, and flatly conceded to Yoon.

The two did not confirm what Ahn’s next role would be after the presidential election, but Ahn expressed a willingness to serve in office.

“In the past 10 years, I have made a lot of efforts (since entering politics), and was committed to legislation (serving two terms) as a lawmaker. But I did not have a chance to try administrative works to show actual achievements,” Ahn said.

“I know there are people who are disappointed with my decision. I would like to deliver my apology here, and I will make sure to prove my executive ability to make Korea a better country.”

Details of the party merger will be discussed after the presidential election, they said.

Ahn, who has long advocated for breaking up what is essentially a bipartisan system in Korea, said he will work to change the right-leaning People Power Party and promote centrism.

Ahn also proposed reforming the electoral system from a single-member constituency system to a medium or minor electorate system, and introducing a two-round system for the presidency.

As the election law bans publishing polling results within six days of the election, how the merger will affect Yoon’s ratings will only be revealed by the election results.

In a survey conducted by Embrain Public from Tuesday to Wednesday -- before the merger -- Yoon led the ruling Democratic Party’s Lee Jae-myung by 45.9 percent to 45 percent in a hypothetical two-way race.

The survey, commissioned by JoongAng Ilbo, was conducted among 2,013 adults.

As for ballots already cast by overseas Koreans for Ahn, as well as for Kim Dong-yeon of the minor opposition New Wave who also withdrew to support Lee Jae-myung, they will automatically become wasted votes.

Overseas voting was held for six days from Feb. 23 through Monday, for those registered in advance. There were about 230,000 Korean citizens who registered as absentee voters at 178 diplomatic offices worldwide.