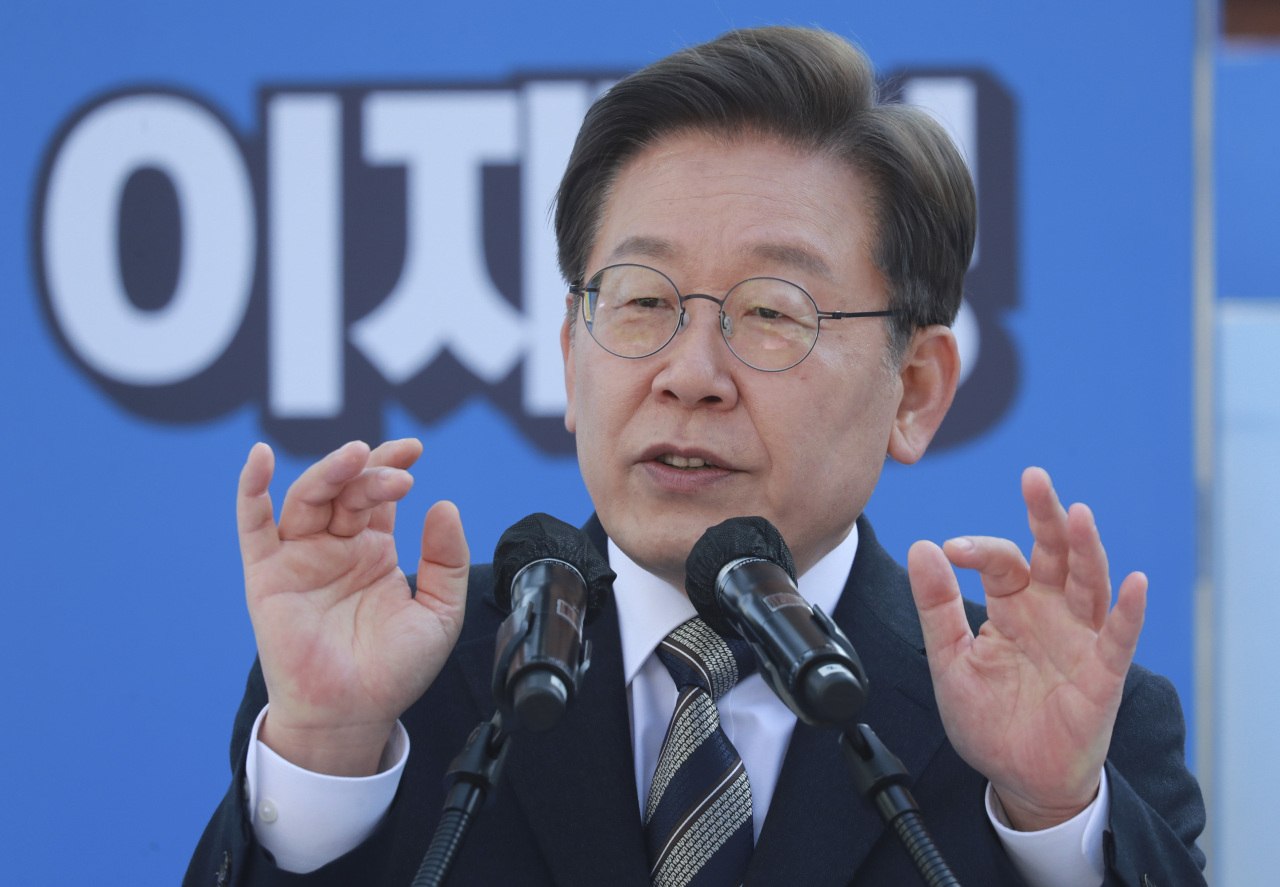 Presidential nominee Lee Jae-myung of the ruling Democratic Party of Korea asks for support from female voters during a campaign rally held in Jongno-gu, central Seoul, on Thursday. (Joint Press Corps)
The presidential election campaign committee of the ruling Democratic Party of Korea is keen on interpreting the effects of the merger deal announced from the opposition with less than 24 hours to go before early voting was due to start at 6 a.m. on Friday.

Campaign staff members for the ruling party's candidate Lee Jae-myung insist the effects of the candidacy merger will be limited, and experts agree to an extent. Yet they agree the announcement will increase the odds of presidential nominee Yoon Suk-yeol of the main opposition People Power Party.

Senior leaders of the ruling party's campaign team at 8 a.m. on Thursday gathered at the Democratic Party of Korea headquarters in Yeouido, western Seoul, for an emergency meeting as Yoon and presidential candidate Ahn Cheol-soo of the minor centrist People's Party staged a press conference at the National Assembly to announce the agreement on merging their candidacies.

The campaign team told reporters that it certainly did not expect the merger to take place, as its officials believed the process had fallen apart for good after Yoon announced the failure in drawing up a deal Sunday.

Rep. Woo Sang-ho of the Democratic Party told reporters in a follow-up briefing that the campaign team had entered a 24-hour emergency mode, which consists of all Democratic Party members in South Korea extensively launching rallies to draw support for Lee ahead of the March 9 election.

"There's no effect coming from a candidacy merger that does not have acceptable progress in the making," Woo said in the press briefing. "We expect voters to sternly judge the problematic merger as they have seen the whole progress of the deal into its making."

The announcement certainly works favorably for Yoon, but its impact could be limited, Woo said. He anticipated that many voters would have lost trust in the two candidates as their respective sides had frequently engaged in disputes and mudslinging right up until reaching an agreement.

"The agreement could also face headwinds, as the progress toward reaching the deal did not involve any process like public surveys, and no new visions or vows were announced," Woo said.

"The deal was reached in a secret discussion, so a lot of questions are unanswered. There certainly would be an influence in the election dynamics, but we diagnose that its effect won’t be decisive."

The Democratic Party's campaign team analyzes that some of Ahn’s supporters will be motivated to support Lee following the announcement, as they may feel betrayed to see negotiations taking place secretly, and politically neutral voters could turn to Lee for his appeals as a "candidate with proven track record of success."

The ruling party maintains that its focus on forming a coalition government following the election will be upheld, as its lawmakers vowed earlier to bring an end to the current political system in which two main political factions are the main actors.

The sincerity of the objective can be seen from the Democratic Party's transparent negotiations leading to the candidacy withdrawal of Kim Dong-yeon of the minor New Wave Party announced Wednesday, campaign officials said.

"Our candidate previously did a one-on-one debate with candidate Kim Dong-yeon on political philosophies and values, not to mention a publicly held meeting in broad daylight before candidate Kim's announcement to withdraw from the race," Woo added.

"We have been continuously explaining the progress to the people, and we have absolutely maintained transparency. That’s what the process of candidacy merger should look like, and we will tell you that our agenda on forming a coalition government stays in place even if candidate Ahn has left to the other side."

The Democratic Party said Lee and Ahn had not held any form of a meeting to discuss merging their candidacies, although it acknowledged that some ruling party officials had engaged in meetings with counterparts from Ahn’s campaign team in recent weeks.

Lee's campaign team as of Thursday morning said it did not expect to announce any new merger deals prior to Election Day, as time remains short to reach any new deals before early voting starts Friday morning. But the team will continue to share its intent to form a coalition government in appealing to supporters of minor candidates, it added.

Rep. Sim Sang-jung of the minor left-wing Justice Party, a presidential candidate most often touted as a possible merger target for Lee’s team, said last month she is not willing to consider any candidacy merger, vowing to finish the race on her own.

Experts diagnose that the announced merger between Yoon and Ahn will be critical in deterring the chances for Lee in winning the presidential race, as many survey results have continued to hint that Yoon will have a greater chance to win if he joins forces with Ahn with politically centrist views.

"This is deadly news for Lee Jae-myung, and unless any new variant surfaces, it would be safe to say that Yoon Suk-yeol has a high probability of winning the race," Eom Gyeong-yeong, director of local political think tank Zeitgeist Institute, told The Korea Herald.

"The effect of the merger will not be overly decisive, but we can assume that more supporters for Ahn Cheol-soo will vow support for Yoon Suk-yeol than for Lee Jae-myung."

Many of Ahn’s supporters are young women in their 20s and 30s, and they could be drawn to support Lee instead of Yoon, Eom said, but voters with keen interest in overturning the Democratic Party regime will move to support Yoon, which would be in greater numbers.

Some of Ahn's supporters are also against the current system run by two main political factions, and they could be inclined to give up voting as a whole, he added.

Yet some experts warn that the party is not over yet. Possibilities remain for the tide to change at any moment as the Yoon-Ahn merger could trigger those supporting the ruling bloc to cement their support for Lee in the neck-and-neck race and still pose a challenge to Yoon’s chances of victory.

"It depends on how the attitude might change from the conservative bloc and how active the supporters of the ruling bloc turn out before and during the election," local political commentator Hwang Tae-soon told The Korea Herald.

"The merger itself is not an end to the race, and we never know what’s happening until the results are out."

Hwang said the merger could have little or no effect if Yoon and the People Power Party loosen up their campaign following the merger while Lee's supporters turn aggressive in gathering more support for the ruling party and its presidential candidate in fears of dimming chances of victory.

"Like in the movies, there could be a surprising end to this race, and we never know until the film is over," Hwang added.