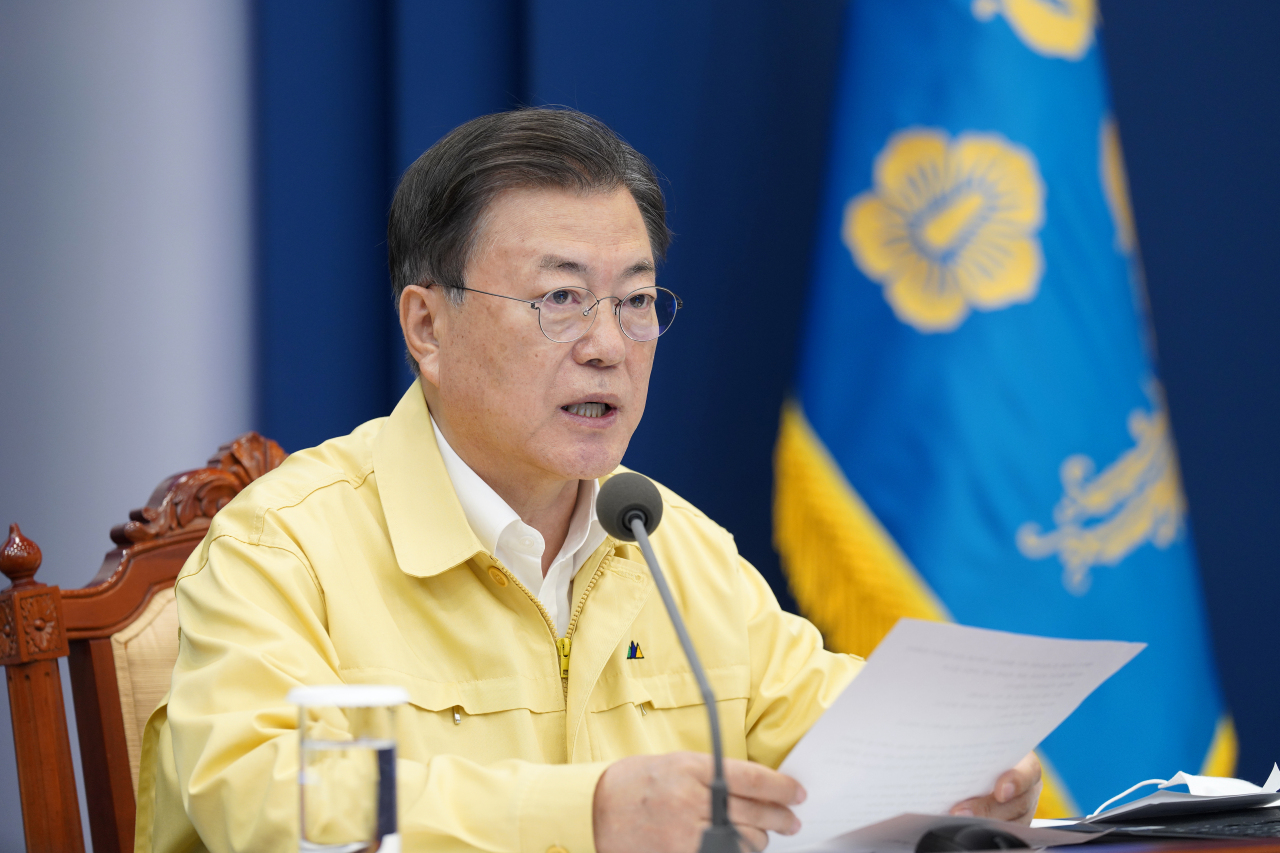 President Moon Jae-in (Yonhap)
As infections surge and the capacity for beds reaches its limit, the government decided that COVID-19 patients should be treated at home -- with hospital treatment the exception.

“New confirmed patients, critically ill patients and deaths are all increasing, and the capacity for beds is getting tighter,” President Moon Jae-in said at the COVID-19 special quarantine inspection meeting Monday. It is the first such meeting in the Seoul metropolitan area since July 12.

He said Korea could not retreat to the past by undoing the step-by-step return to normal. Instead, the nation would postpone the transition to the second stage of recovery and implement special quarantine measures for the next four weeks.

During the period, all confirmed patients will stay at their homes and will receive inpatient treatment only if necessary, such as when they live in residential environments that are vulnerable to spread.

The government will try to minimize the number of severely ill patients by encouraging active use of antibody treatments such as Regkirona.

It also plans to introduce oral treatments. In addition to 440,000 it pre-purchased, the government will review additional purchases and push for consultations with pharmaceutical companies to introduce them quickly.

The government had been considering other measures, such as expanding the vaccine pass system and tightening limits on gatherings, but decided to take more time to "collect opinions," considering their social and economic impact.

Moon also urged all Koreans to take a third dose of COVID-19 vaccine.

“It is necessary to change the perception, that the third inoculation is not a booster shot, but a basic vaccination,” the president said.

He urged the government to make all-out efforts to administer a third shot to everyone who has had a second.

As of Sunday at midnight, the cumulative number of people in Korea who had received at least one shot for COVID-19 was 42.51 million, or 82.8 percent of the population. The total number of people who had completed a second round of vaccinations had increased to 40.90 million, or 79.7 percent. Data on third shots has not been disclosed yet.

“It is also essential to speed up the vaccination of teenagers,” Moon said.

Last week, among young people aged 12 to 17, 1.1 million or 42.7 percent had received their first vaccinations.

He asked the government to fully explain the safety and effectiveness of vaccines to parents and students.

Daily cases have hovered around 4,000 for days, and the number of critically ill patients is in the 600s. Intensive care units are close to maximum capacity.

ICU occupancy was 77 percent nationwide and 86.6 percent in the Greater Seoul area, which includes Incheon and Gyeonggi Province. The number of patients waiting at home after being confirmed to have COVID-19 is also increasing. As of Sunday, 1,265 confirmed patients were waiting for beds in Greater Seoul.

In addition to the surge in cases, fears are mounting over the newly identified coronavirus variant omicron. The variant was discovered in South Africa and has since been detected in more countries, including the UK, Germany, Italy and Hong Kong.

Foreign nationals entering Korea after stopovers from these eight countries are restricted from boarding at the check-in stage, and even if they board a plane, they are not allowed to enter the country.

Koreans coming from these countries will be quarantined at temporary living facilities prepared by the government for 10 days regardless of whether they are vaccinated or not.

As of Sunday at midnight, the number of COVID-19 confirmed patients in Korea had increased by 3,309 from the previous day. This is the highest number of cases newly confirmed on a Sunday.

The cumulative number of confirmed patients totaled 444,200, with the cumulative death toll being 3,580 people and the fatality rate standing at 0.81 percent.