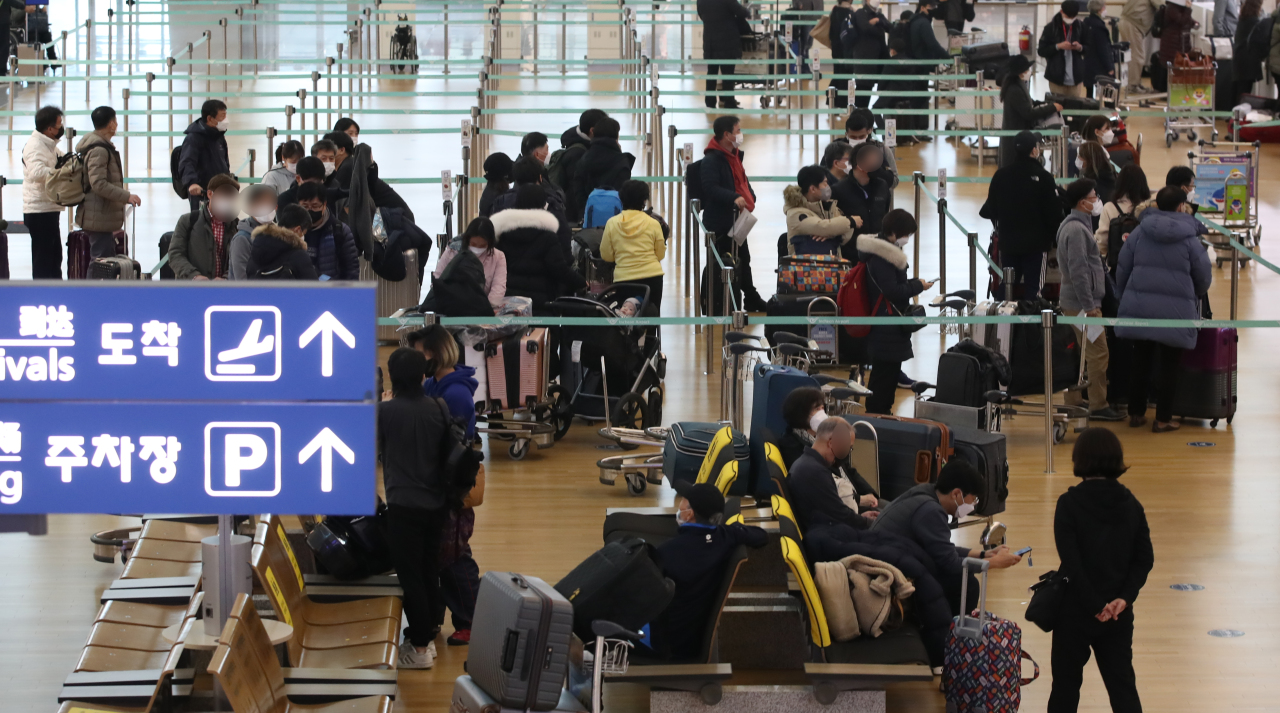 The Korea Disease Control and Prevention Agency called an emergency meeting Saturday evening with 13 ministries and announced that all foreigners who have been in the newly listed African countries will be refused entry to Korea. The travel restrictions apply to South Africa, Botswana, Zimbabwe, Namibia, Lesotho, Eswatini, Mozambique and Malawi.

Korean citizens departing from the southern African countries will be required to quarantine at a government-approved facility for 10 days upon arrival, regardless of their vaccination status. They will be asked to take a PCR test on the first, fifth and last day of quarantine and must be negative before they can be released.

This is Korea’s first entry ban on foreigners since the first set of COVID-19-related travel restrictions issued in February last year on arrivals from Hubei province, then the epicenter of the Chinese epidemic. The KDCA added that depending on emerging risks of the fresh variant, Korea may expand its list of countries under higher warnings.

Korea joins a growing list of countries tightening border controls after the World Health Organization declared omicron to be “of concern” on Friday. The WHO said the variant may spread more rapidly than previous variants, and preliminary evidence suggested an increased risk of reinfection.

No cases of omicron have been detected in Korea so far, according to the KDCA’s Saturday statement. Among the 22 travelers from Africa who tested positive in the past five weeks, 14 were found to have delta in genomic sequencing. The samples from the other eight “could not be analyzed” because “the amount of the virus was too small.”

Korea analyzes about 15 percent of samples collected from patients with confirmed infections on a weekly basis to determine the presence of variants. Since the first cases were discovered among passengers from India in April, delta has quickly become the dominant strain here, accounting for 100 percent of all sequenced cases in the third week of November.

Dr. Paik Soon-young, an emeritus professor of microbiology at Catholic University of Korea, said since omicron was first reported to the WHO only days ago, there was not enough data yet to know it is in fact more transmissible than delta or whether it can dodge existing vaccines and therapeutics.

“Infections have been on a steep rise in South Africa recently, and health officials there say omicron might be behind it,” he said.

Citing data South African health officials, Paik said the variant has “an astonishingly high number of mutations” in the spike protein -- the part of the virus that binds to human cells -- which may allow it to evade the body’s immune defenses better.

“There are theoretical reasons as well as some real world trends seen in South Africa to advise caution. In South Africa, omicron seems to be outpacing delta,” he said. “But then again, South Africa is only 21 percent vaccinated. It’s hard to know how the variant might fare in highly vaccinated countries.”

He added that it’s hard to predict if omicron will go on to replace delta, however, based on the data available to date. The delta plus had worrying features, but it did not spread globally like delta did, for instance. More people were immune through vaccination now compared to before when delta took hold in the summer.

“While it’s wise to act fast, very little is known about it so far,” he said. “How well the variant may replicate after entering the body, which would be associated with its ability to cause more severe disease, was something that we did not know yet, either.”

As for its ability to evade treatment, he said that the effectiveness of monoclonal antibodies, which are developed to target specific receptors and prevent viral entry, might be compromised to a greater extent. Oral antivirals made by Pfizer and Merck, on the other hand, are designed to inhibit viral replication in infected cells and unlikely to be affected.

Meanwhile, Korea on Sunday announced a record number of deaths and intensive care hospitalizations from COVID-19. After ending most pandemic curbs earlier this month in a bid to return to normal, the country saw its outbreak worsen by unprecedented levels.

Nationwide, more than 75 percent of all intensive care beds in the country were occupied by Saturday afternoon, crossing the threshold for restoring intense social distancing. In the 24-hour period that ended Saturday at midnight, 56 people died -- the highest number of deaths reported in a single day since the pandemic began.