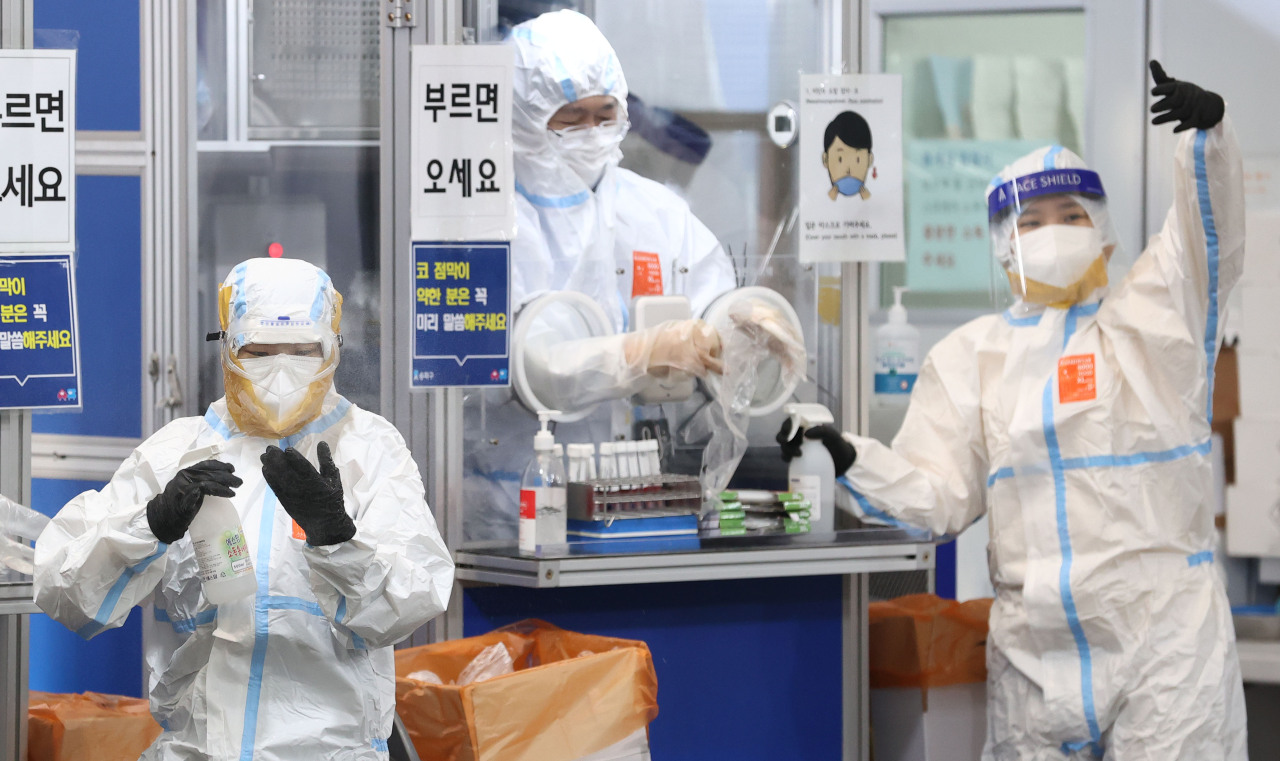 Medical workers carry out their job at a COVID-19 testing booth at a public health center in Seoul's southeastern district of Songpa on Sunday. (Yonhap)
South Korea's new coronavirus cases stayed below 4,000 for the second straight day Monday due largely to fewer tests, but the high number of critically ill patients remained worrisome amid concerns about the new virus variant.

The country reported 3,309 new COVID-19 cases, including 3,286 local infections, raising the total caseload to 444,200, according to the Korea Disease Control and Prevention Agency (KDCA).

Monday's tally was down from 3,928 reported Sunday and 4,068 on Saturday. The country reported the highest daily cases of 4,115 to date on Wednesday.

Daily virus caseloads tend to decrease on weekends and holidays due to fewer virus tests.

The country added 32 more deaths from COVID-19 on Monday, raising the death toll to 3,580. The fatality rate stood at 0.81 percent.

Critically ill patients came to 629, down 18 from the previous day, but it still marked the sixth straight day such cases stayed above 600.

The continued surge in virus figures, notably the high number of critically ill patients, have weighed on the country's efforts to regain normalcy through a gradual easing of virus restrictions under the "living with COVID-19" scheme that began early this month.

South Korea planned to move to further relax the virus curbs in mid-December, but health authorities have warned the country may not be able to do so if the current virus trend continues.

Health Minister Kwan Deok-chul called for people to actively take the booster shots so that the relaxation plan of virus rules can stay on track, stressing now is the "most difficult time" since the scheme came into effect.

"COVID-19 risks are threatening our recovery efforts at a much faster pace than we expected," he said in a briefing. "Essential booster vaccinations are a vital tool that will allow us to continue ahead on this path forward."

As of Monday, about 2.84 million people had received a booster shot, according to KDCA data.

The emerging omicron variant across the globe has put South Korea on high alert, prompting the authorities to put a ban on foreign arrivals from eight African countries to block the inflow of the potentially more contagious variant.

The government will unveil revised quarantine measures later in the day to tackle the virus upsurge after a meeting to be presided over by President Moon Jae-in.