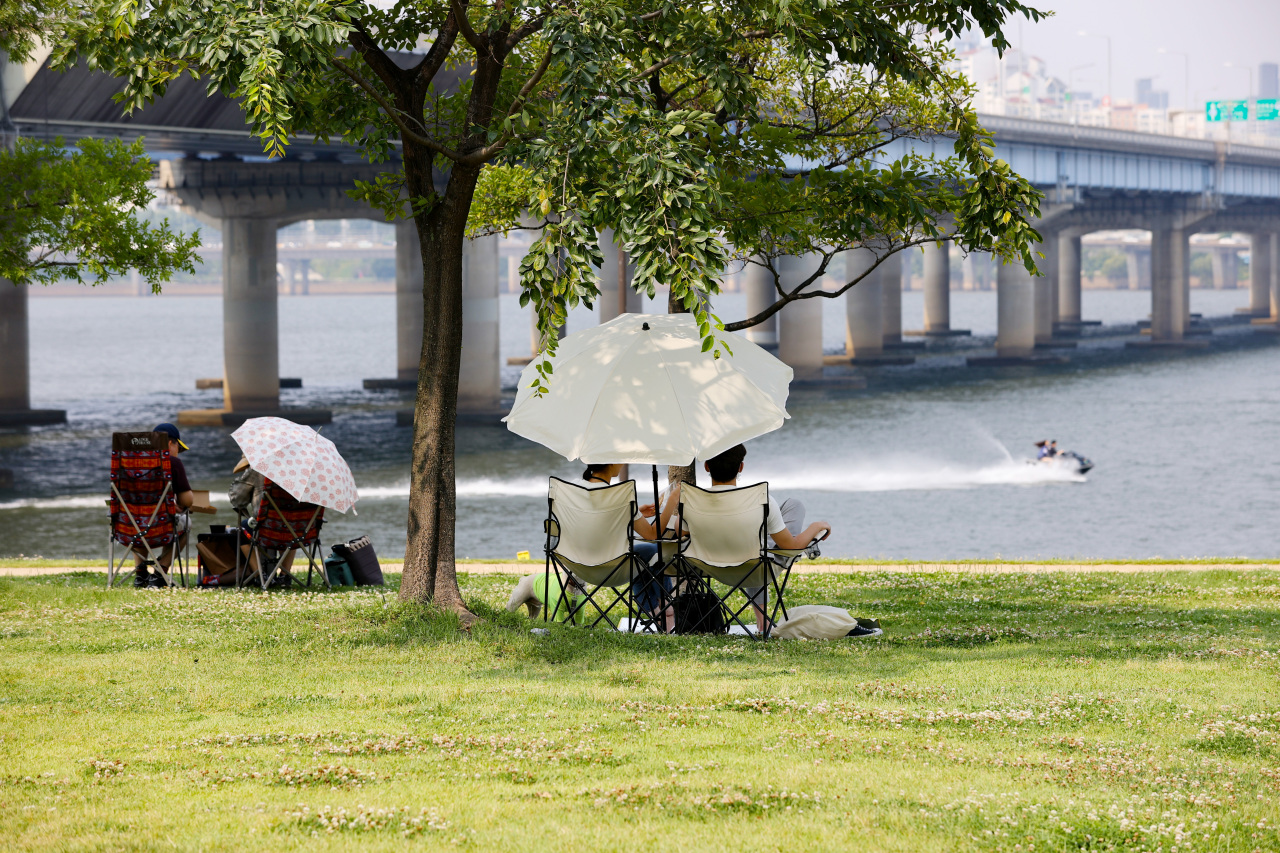 People enjoy the sun at a park in Yeouido, central Seoul, on Sunday. (Yonhap)
With a quarter of its population vaccinated with one dose of a COVID-19 vaccine, Korea says it is ready to allow more mingling and less mask-wearing in the summer.

“The current guidance fails to take into account the improvements in our pandemic situation -- vaccines are rolling out at an increasing pace, our health care systems can handle far more patients at a time now compared to a year ago, and new cases are down,” Minister of Health and Welfare Kwon Deok-cheol said at Sunday’s news briefing.

“Before the end of June, vaccinations for older and vulnerable age groups would be more or less complete,” he said. “As threats of the pandemic subside, it’s time we move on to a sustainable form of social distancing.”

For the remainder of this month through the majority of July, vaccination efforts will focus on delivering first doses to those 60 to 74 years old, and second doses to first-dose recipients who are due to receive them. As the vaccine schedule goes by age, people in their late 50s will become eligible in the last week of July.

The most sweeping change under the new guidance is relaxations on social gathering restrictions. For about half a year since the winter wave, groups of no more than four people could gather for private purposes.

Under the new guidance, the “rule of four” will not be in effect unless more than 1,000 cases are logged a day for a sustained period of time. For 500-something daily cases, up to eight people can congregate. There’s no limit on how many people can meet up when there are less than 500 cases a day.

Concerts, festivals and sporting events can host up to 5,000 people at a time, but droplet-generating activities such as singing and cheering are discouraged. For protests, the rules are stricter, with crowd sizes of 50 to 500 permitted depending on the case rates.

Facilities that are considered to be at high risk of contagion, such as bathhouses, nightclubs, escort bars and karaoke lounges, can operate full-time as long as the number of cases occurring per day stays below 1,000. Once it exceeds the threshold of 1,000 cases a day, they can only open until 10 p.m.

“The core idea is that more will be left up to individuals, businesses and other entities to follow recommended safety precautions, but they would also take on greater responsibility,” the minister said.

People who are semi-vaccinated, meaning two weeks have elapsed since taking just one of the two prescribed doses, no longer need to wear masks outdoors. The capacity and gathering limits don’t apply to them either. For instance, they are counted out from the maximum number of people public spaces like cafes and restaurants can entertain at a time.

Once two weeks have past since the second dose, people are considered fully vaccinated, after which point even wider-ranging waivers from social distancing are granted. On top of being exempt from post-travel quarantine, they may also be able to take their masks off in places like movie theaters where maintaining a safe distance from another person is difficult.

Dr. Paik Soon-young, a virologist at Catholic University of Korea, urged vigilance from people who aren’t vaccinated yet or only half-vaccinated even as relaxed guidance comes into effect.

“We’re not quite done vaccinating older populations in the summer,” he said. “50-somethings are still waiting for their shots. People in their 60s to early 70s, who are offered the AstraZeneca vaccine, need to wait until late August or September before they can get their second dose and attain maximum protection.

“Your immunization isn’t complete until the second dose is administered.”

Schools are reopening in full for in-person classes in the fall semester, because by September 70 percent of Korea will be at least partially vaccinated, per the vaccine plan. Field trips and other hands-on exercises such as sports and music will resume normally after a year and a half of virtual learning, according to the Ministry of Education.

But as Korea is only extending vaccinations to people aged 18 years and older, children will need to observe health precautions closely once they’re back in classrooms, said pediatric infectious disease specialist Dr. Eun Byung-wook at Nowon Eulji University Hospital in northern Seoul.

“As children younger than 18 cannot be vaccinated, they would need to keep wearing face masks and practice other safety steps possibly until early next year at the least when vaccines might become available to them,” he said. “Although children tend not to fall seriously sick from the existing versions of the virus, the impact of new variants on them is not yet fully understood.”

Korea’s COVID-19 vaccination program kicked off on Feb. 26 and took over three months to reach the milestone of 13 million people -- or about 25 percent of the population -- having first doses last week, according to Korea Disease Control and Prevention Agency data.