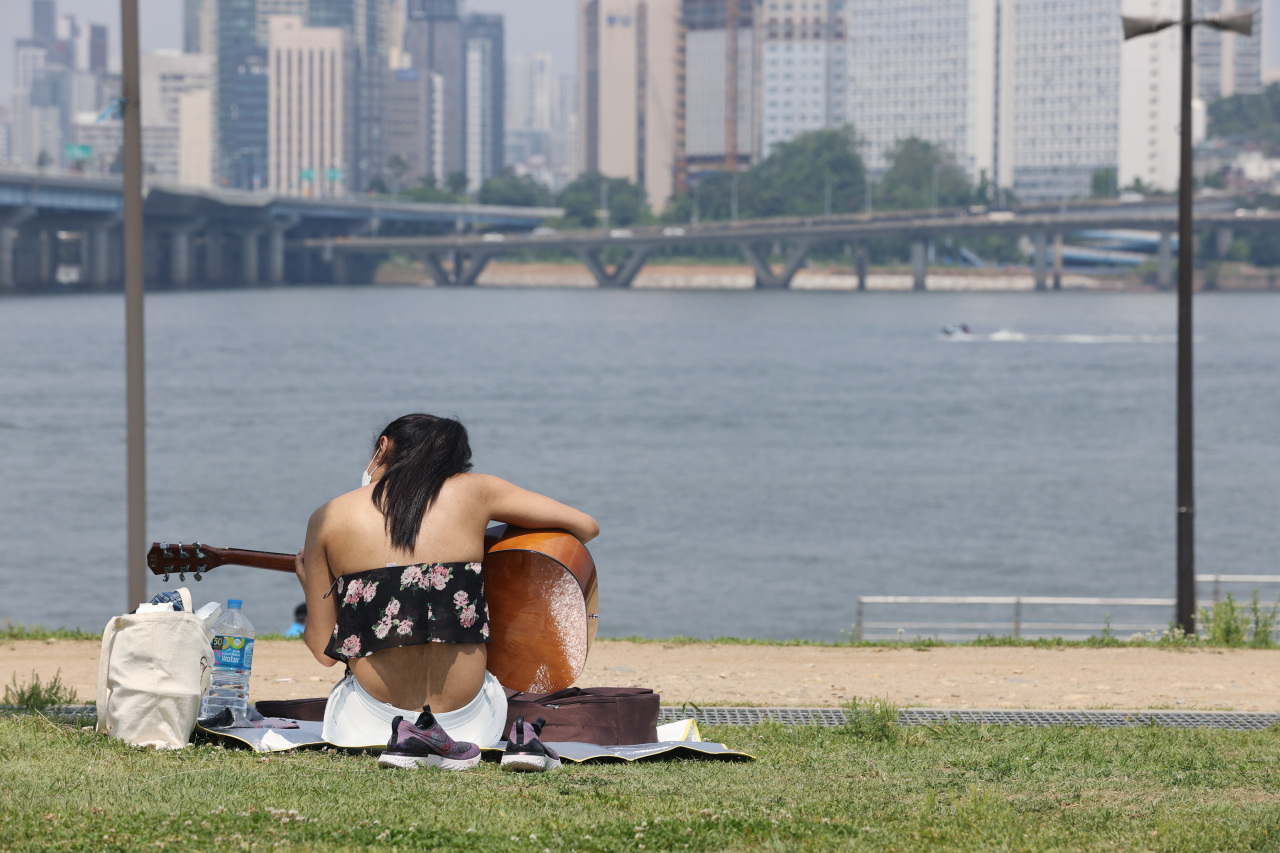 A woman in face mask plays the guitar at a riverside park in Yeouido, central Seoul, on Sunday. (Yonhap)

South Korea plans to allow more socializing and less mask-wearing through its pre-herd immunity phase of summer and early fall. But as the vaccine still remains out of reach for many, the country may be moving too fast with the new recommendations, some experts worry.

President Moon Jae-in promised “a mask-free Chuseok,” a national holiday coming up in late September, during a special COVID-19 response meeting Monday. The president’s goal is for 70 percent of the population to get at least one dose before the end of September.

“When Koreans gather with family this Chuseok, things will be like normal again,” he said.

He said as early as next month, when about a quarter of Koreans will have had one dose of a vaccine, the pandemic will not be as threatening, and normal ways of life can resume at least in part.

In the same meeting, the administration’s top health official, Kwon Deok-cheol, said this summer would be closer to normal as less strict rules, coupled with post-jab waivers, come into force. After receiving the first dose in a two-dose vaccination series, people will be exempt from the ban on large gatherings and from mask mandates outdoors, for instance, he said.

Less caution from vaccinated people could jeopardize the safety of those who don’t have access to the vaccine yet, especially as much of Korea remains unvaccinated, according to Dr. Ma Sang-hyuk, vice president of the Korean Vaccine Society. As of Monday at midnight, 16 percent of 51 million people in Korea received just one dose, and only 4 percent were completely vaccinated with two doses.

“All this talk of normal can give people the wrong idea about post-vaccination safety. The vaccine shields you from getting severe symptoms if you get infected, but it does not prevent you from spreading it to others,” he said. “There can be other ways to incentivize vaccinations without compromising safety.”

He added that the exemptions from social distancing and face mask requirements for half-vaccinated people could also make them less motivated to get the second dose -- which means they would not be as effectively protected against the virus.

This is especially so as variants spread through communities, according to virologist Dr. Paik Soon-young of Catholic University of Korea.

“Korea is discovering more concerning, potentially vaccine-resistant variants now monikered beta and delta -- referring to the ones first spotted in South Africa and India, respectively -- in large numbers,” he said. Korea analyzes 15 percent of patient samples each week, and found 1,738 cases of main variants of concern to date.

He said one dose is “good enough protection” against the original strain, but less so against some variants, which will “almost certainly dominate the cases across the country by July.”

The AstraZeneca vaccine, which is most widely administered here, is only 33 percent effective against the delta variant three weeks after the first dose, a recent Public Health England study showed, while it rises to 60 percent with the second dose.

Paik said the delta variant, which is driving the explosive outbreak in India, may be more likely to cause severe outcomes in young people than the original form of the virus as well.

“Young people were relatively spared from the virus, that is the original virus. But we don’t know how they will fare against the mutations,” he said.

“The plan for vaccinating younger people in their 20s to 40, the socially active cohort, hasn’t been laid out yet. Until Korea can open up vaccine eligibility to all adults, it’s probably best to save the rewards for later.”

As vaccination rates remain low, cases are picking up again in Korea. The daily average number of locally transmitted cases rose slightly last week to 578.4 from 562.3 the week before, according to government statistics. The reproduction number, which measures the spread of an infectious disease, was greater than 1 in the Seoul area.

Kim said summer will be “a confusing, in-between period” as different rules come into play depending on one’s vaccination status.

“Before, all of us had to stay home as much as possible and wear masks. But now there are the partially and fully vaccinated, and the yet-to-be vaccinated,” he said. “It can be more challenging to solicit compliance with health protocols from people who can’t get the vaccine yet, and from people who are vaccinated but would still need to exercise caution to protect those who aren’t.”