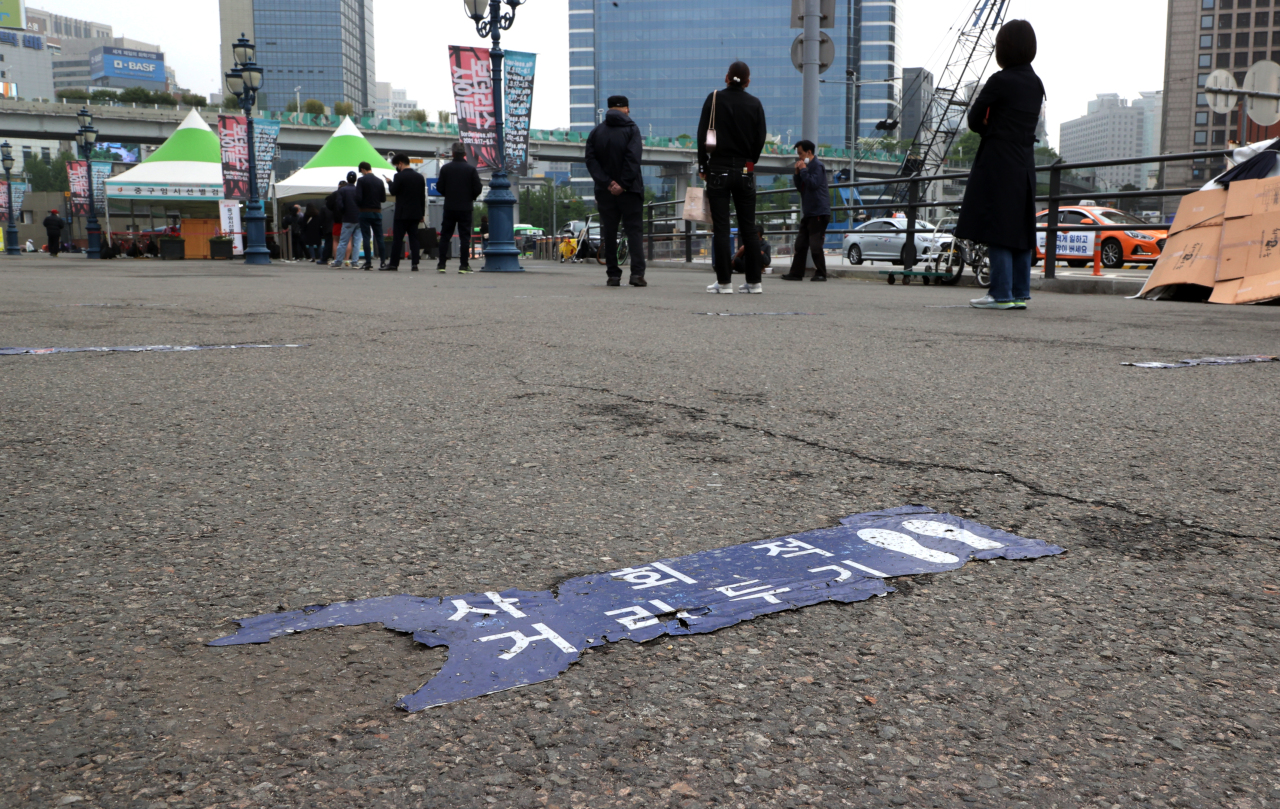 This photo shows people lining up to take a COVID-19 test at a testing booth in front of Seoul station on Wednesday. (Yonhap)

COVID-19 cases are surging and hospital beds are filling once again in South Korea, but health officials say they have no plans to reinstate harsher mitigation measures or pause reopenings.

This reluctance to adopt stronger restrictions may leave the country another spike in infections, experts warn.

Jeong Eun-kyeong, the Korea Disease Control and Prevention Agency’s Commissioner, said in response to a press question during a briefing Thursday that the country “could afford to weather” the current case rates without reimposing restrictions.

Korea has reported an average of 600 to 700 cases a day for over a week now, grounds for declaring the second-strictest tier in its social distancing system. Instead, the country has applied less restrictive tiers since mid-February, with most businesses open, including bars and other places deemed as having higher risk of contagion.

The Ministry of Health and Welfare insists Korea’s health care system can continue to meet the people’s needs despite the number of patients in isolation, either in hospitals or nonhospital facilities, rising to over 8,600 as of midnight Wednesday’s briefing. The number of critically ill patients, which was under 100 about a month ago, reached 160 on the same day.

“Korea has enough beds to take in up to 2,000 patients being diagnosed for 20 days straight,” said the ministry’s spokesperson Son Young-rae in Wednesday. While recognizing the recent uptick in infections, he said “it’s hard not to think of the economic costs of social distancing.”

To expedite the turnover of beds, Korea has already relaxed its criteria for discharging patients. Patients are asked to leave isolation if they don’t have a fever for 24 hours straight without the help of medication on the 10th day after diagnosis. After that point, their medical costs are no longer covered by the state health insurance service.

Infectious disease professor Dr. Kim Woo-joo of Korea University said Korea was “playing with fire” by stopping short of the necessary restrictions. He said the lack of action from the leadership now was “reminiscent” of the weeks leading up to the winter wave, when health officials moved forward with reopenings as the virus rebounded.

“We cannot let our guard down, at least until the vaccinations of vulnerable populations are completed,” he said. Just 5 percent of the population have been half or fully vaccinated to date.

As Korea is keeping its borders open, experts fear that more contagious and potentially vaccine-resistant variants could take hold. Although all air passengers are required to quarantine for two weeks upon arrival, not everyone is offered accommodation.

“More than 4,000 passengers fly into the country a day, and it’s impossible to quarantine all of them at state-assigned hotels. Those with a family or a residence here are put in self-quarantine,” said Yoon Tae-ho, a senior Health Ministry official.

This could create an opportunity for people to spread the infections to others while in quarantine, according to virologist Dr. Paik Soon-young of Catholic University of Korea.

“There have been several instances where home-quarantining passengers passed on the disease to their family members or roommates,” he said, calling for better monitoring of passengers arriving from regions where the variants are dominant.

Korea has confirmed cases of all of the major variants first identified in the UK, South Africa, Brazil, Nigeria, India and the Philippines. The number of variant cases here is estimated to be 1,150 as of this week.

Health officials are facing criticism over the way the ban on social gatherings of five people or more is applied. Politicians in high offices have been repeatedly sighted defying the ban, but let off the hook without consequences.

Son of the Health Ministry told Wednesday’s briefing that President Moon Jae-in’s dinner with more than four of his former aides was not considered a violation of the rule.

“The president’s gathering was of an official nature, and cannot be interpreted as a breach of the rules,” he said. The ministry had previously said work dinners weren’t allowed.