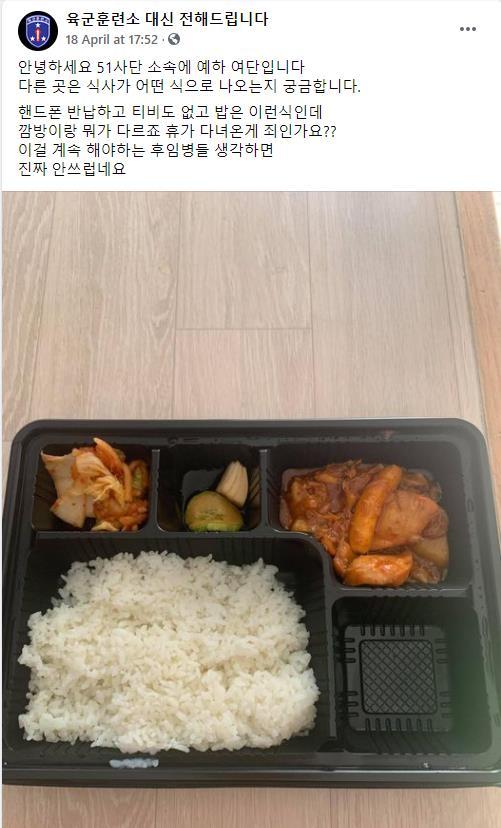 An army conscript claims that he was not given sufficient meals while in quarantine in a Facebook post on April 18. (Yonhap)
South Korea’s National Human Rights Commission said Thursday that it will launch an investigation into allegations that the military violated rights of conscripts who said they had been fed poorly and denied access to bathrooms because of the COVID-19 response.

The previous week, an Army conscript prompted public outcry when he revealed on Facebook that he had been given insufficient meals while in quarantine, showing a picture of what appeared to be a nearly empty tray.

The military admitted there had been a shortage of meals rationed because those in quarantine had to receive their meals after others, adding that it will increase the supply.

Meanwhile, another Army conscript at a boot camp said he had been verbally abused by his superiors for taking too much time in the bathroom, while others there said they had been denied enough water, according to a human rights watchdog who relayed their accounts.

The military, which had blocked free access to bathrooms and eliminated water dispensers at the camp to avoid mass infections among thousands of conscripts, said it is looking to change the measures in place.

The rights panel said it will make in-person interviews with conscripts who had lodged complaints, and look at rights abuses at major boot camps. Outside experts will join the probe to help write up a recommendation, it added. The military said it will cooperate with the inquiry.