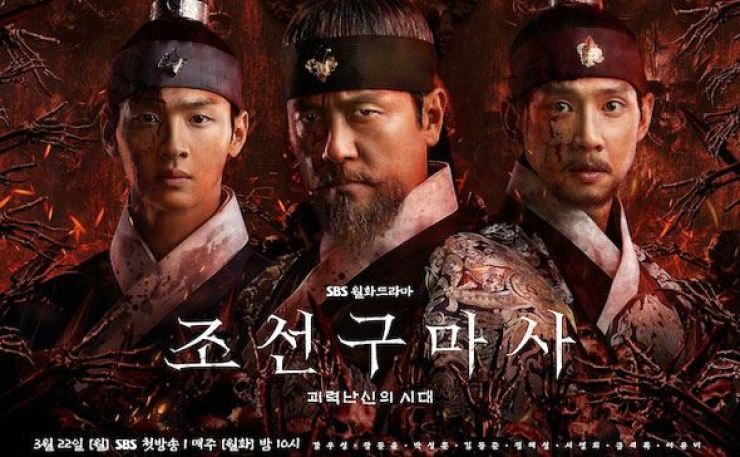 Poster for “Joseon Exorcist” with actors (from left) Jang Dong-yoon, Kam Woo-sung and Park Sung-hoon (SBS)
The writer and cast of SBS ‘Joseon Exorcist’ on Saturday released apology statements for taking part in the show that depicts Korean history inaccurately.

“I sincerely apologize for the trouble my inconsiderate script has caused to viewers over the past few days,” writer Park Kye-ok said in a statement. “I should have learned from my past mistakes and presented a better story as a writer, I made viewers angry with my lack of judgment.”

The apology statement came out after the broadcaster on Friday announced it decided to cancel the drama after its first two episodes took a beating over perceived historical inaccuracies and distortions.

Many viewers pointed out that the show disparages King Taejong (played by Kam Woo-sung), the third king of Joseon who ruled from 1400 to 1418, by showing him cruelly slaughtering innocent people because he was hallucinating, for which there is no historical basis.

Chinese-style costumes and props in the TV drama set in the Joseon era also received criticism for inappropriate usage, especially at a time of intensifying controversy between Korea and China over spurious Chinese claims to kimchi and hanbok.

Last year, Park also received similar criticism for misrepresentation of history in her previous tvN drama “Mr. Queen” for featuring scenes like the Veritable Records of the Joseon Dynasty being equated to a tabloid.

The show received “administrative guidance” for controversial scenes from the subcommittee of the Korea Communications Standards Commission.

The main cast of “Joseon Exorcist” also took responsibility for taking part in the show on Saturday.

“As a cast member of ‘Joseon Exorcist’ I apologize for causing concerns to the public,” Kam said in his statement. He added that he apologizes for not being more considerate about the historic accuracy in the show as an actor who has a great influence on the public.

“I was ignorant and naive about the matter, I have no excuse, I apologize,” the show’s actor Jang Dong-yoon said.