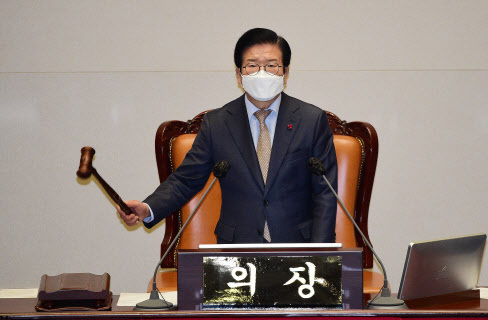 The parliament on Friday passed the Resolution Condemning Myanmar’s Military Coup and Urging Restoration of Democracy and Release of All Persons Arbitrarily Detained, criticizing the military government’s crackdowns on protests and expressing support for the democratic movement.

The resolution defined Myanmar’s military coup and its crackdown on protests as a “serious defiance of democracy,” urging immediate release of State Counselor Aung San Suu Kyi as well as others arbitrarily detained during the coup that commenced on Feb. 1.

“Today’s Myanmar, which formed a democratic government in 2015, sprouted from the noble sacrifices of numerous citizens who fought for democracy, and reached a new turning point in history when the democratic government won a landslide victory in the 2020 general election,” the resolution reads.

“At this very watershed moment, Myanmar’s military once again used violence to shatter hopes for democracy and threatened the lives of the people, brutally crushing the full fruits of democracy after 50 years of adversity, thus making democracy seriously challenged.”

The National Assembly also called for safety and freedom of 3,500 Koreans residing in Myanmar, while calling for Myanmar’s military to observe fundamental human rights and immediately suspend the use of violence against citizens.

By passing the resolution, lawmakers also vowed to urge the South Korean government to work with the international community in taking actions in restoring the democratic order of Myanmar.

The resolution, to be sent to the United Nations, Association of Southeast Asian Countries and Myanmar, was signed unilaterally by all lawmakers of the ruling and opposition parties.