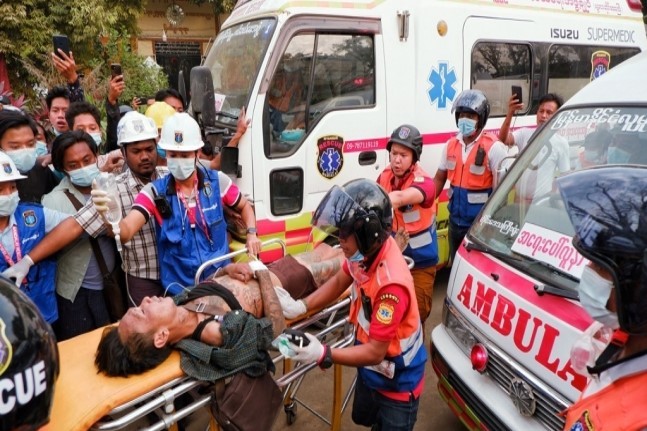 A Myanmar citizen who protested against the military coup gets transported by paramedics on Feb. 20. (Yonhap)
South Korean lawmakers on Monday called for a restoration of democracy in Myanmar and raised concerns about atrocities against ethnic minorities, after the military junta took control in a coup.

Myanmar’s military on Feb. 1 overthrew the country’s democratically elected government and detained civilian leader Aung San Suu Kyi. A state of emergency was declared, rolling back efforts to end more than 50 years of military dictatorship and establish a democratic government through the 2015 general elections.

On Monday, ruling Democratic Party Chairman Lee Nak-yon said on Facebook that the suppression of protesters by Myanmar’s military government is “a grave crime that can never be tolerated and should not be tolerated.”

“Korea achieved democracy with the blood and tears of the people. So we deeply sympathize with and fully support the Myanmar people’s desire for democracy,” Lee said.

”We will quickly vote on a resolution to denounce Myanmar’s military coup, which has already been submitted to the National Assembly,” he said. “The military government can take power for a while with a bayonet, but democracy will win in the end.”

Earlier in the day, Cho Hye-min, the spokeswoman of progressive minor Justice Party, also called on Myanmar’s military to put a stop to the coup, saying it has caused “devastating” destruction to its citizens and their daily lives.

“According to reports, more than 100 people have been injured so far. It is very worrisome that the bloodshed will worsen. The military government is even arresting a number of social figures,” Cho said.

“To restore human rights, peace and democracy in Myanmar, the international community must also actively work to come up with practical measures.”

This is the party’s second call to action following a statement first released last week.

“Korea should never turn a blind eye to this issue given that Korea was also a country where civil resistance against military dictatorship had long continued,” Cho said earlier.

Condemnation of the coup also came swiftly from across the political spectrum.

On Friday, 25 lawmakers from the main opposition People Power Party proposed a parliamentary resolution in condemnation of the Myanmar military forces’ actions, such as the repression of minorities and atrocities against civilians. They also expressed concerns that it could bring about a regression in human rights and democracy.

The lawmakers urged the immediate release of politicians and officials, including Aung San Suu Kyi, and recommended that the Korean government cooperate closely with the international community to tackle the issue.

Earlier this month, 14 lawmakers from the ruling Democratic Party of Korea also sought to push for a resolution at the National Assembly.

The resolution called for the establishment of legitimate political power through elections to lead Myanmar, the release of detained politicians and restoration of the democracy, active participation of the Korean government in joint response to the international community and the international organizations’ protecting the people of Myanmar.

Democratic Party Rep. Lee Won-wook said, “The democracy achieved by the sacrifices of numerous Myanmar people should not be trampled on. Korea and the international community should work closely together to restore democracy in Myanmar.”

Lee was sentenced to three years in prison in 1985 for his participation in the student movement during the regime of authoritarian Chun Doo-Hwan.