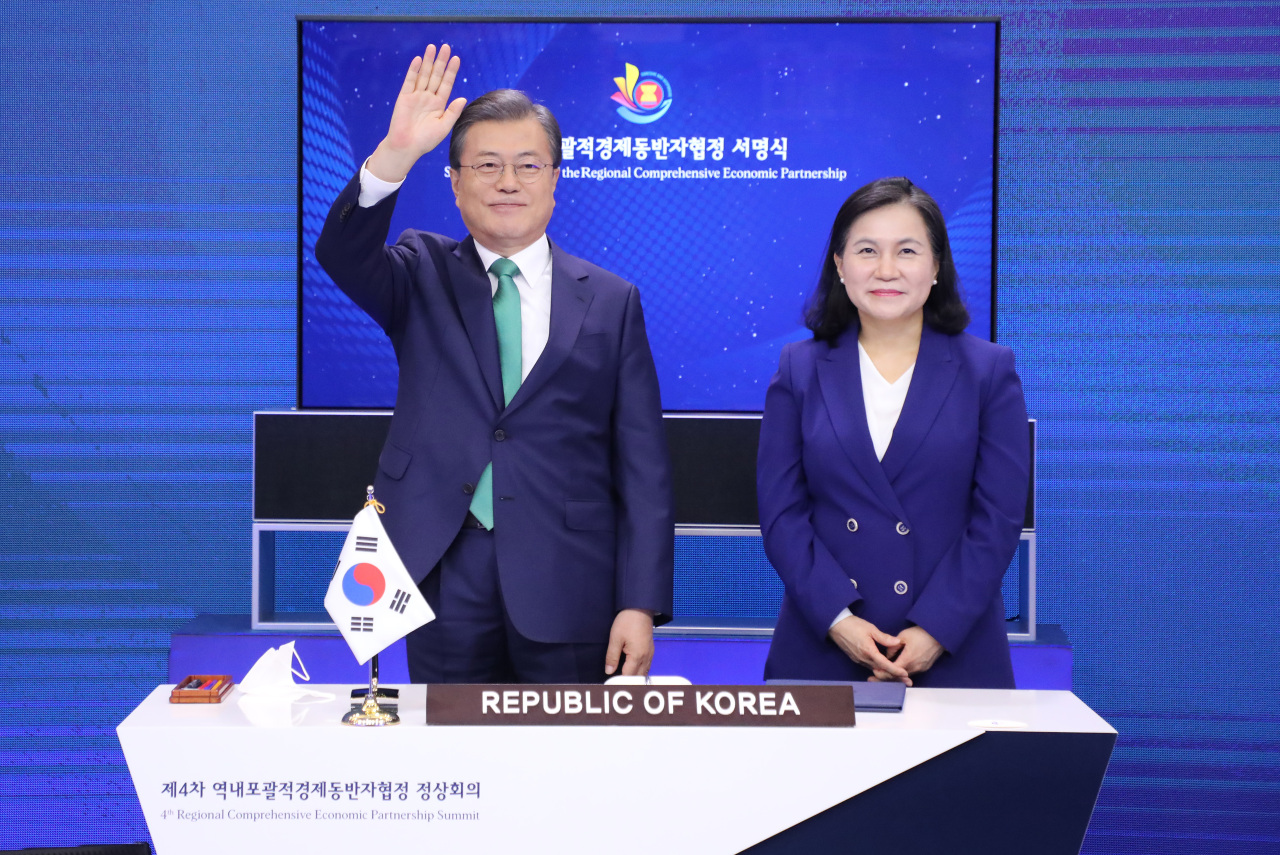 South Korean President Moon Jae-in (L) waves to leaders of other nations, with Trade Minister Yoo Myung-hee standing next to him, during the signing ceremony of the Regional Comprehensive Economic Partnership (RCEP) agreement at Cheong Wa Dae in Seoul on Sunday. (Yonhap)
South Korea on Sunday signed a mega free trade pact that would create the world’s largest open trading bloc of 15 economies, including China and Japan.

President Moon Jae-in formally inked the Regional Comprehensive Economic Partnership Agreement at a virtual summit with the leaders of 14 partner countries, including 10 members of the Association of Southeast Asian Nations, the presidential office of Cheong Wa Dae said.

“We note that the RCEP Agreement is an unprecedented mega regional trading arrangement that comprises of a diverse mix of developed, developing and least developed economies of the region,” the leaders said in a joint statement.

“We believe that RCEP, being the world’s largest free trade arrangement, represents an important step forward toward an ideal framework of global trade and investment rules.”

The leaders agreed to continue to work for the deal’s early ratification. To go into effect, an FTA needs parliamentary approval.

The RCEP, which has been eight years in the making, involves 10 ASEAN members, Korea, China, Japan, Australia and New Zealand. Combined, they make up nearly 30 percent of total global output and one third of global consumers.

Moon described the signing of the legal text as a “historic moment,” expressing hopes that it would serve as a momentum for economies to rise from troubles caused by the coronavirus pandemic.

“Facing the challenges of COVID-19, rising protectionism and threats to multilateralism, we hereby champion values of free trade, led by the young and vibrant ASEAN,” the president was quoted as saying by his spokesperson Kang Min-seok.

The remark appears to counter the perception by some observers that the RCEP is led by China and the signing is a coup for the US which has been raging a trade war with China.

The accord would remove already low tariffs on trade of goods between member countries over time. It is less comprehensive than the 11-nation Pacific Strategic Economic Partnership that President Donald Trump pulled out of in 2017, shortly after taking office. South Korea and China were not part of the deal.

The RCEP deal is widely expected to give fresh impetus to the Korean economy, Asia’s fourth-largest depending heavily on exports, as it struggles to cope with growing tides of protectionism as well as repercussions from the US-China trade conflict.

The state-run think tank Korea Institute for International Economic Policy, in a November report, projected the deal to boost the country’s real economic growth by 0.41 to 0.62 percent over the next 10 years.

South Korea already has free trade pacts with 13 of the 14 RCEP partner economies. The only exception is Japan. Negotiations for Korea-Japan FTA have been stalled for years amid soured bilateral relations.

“It can be said that the new pact will act as an upgrade to the existing, low-level open market agreements,” explained an official from the Ministry of Trade, Industry and Energy.

Negotiations for RCEP began in November 2012 originally with 16 countries. India last year dropped out. A total of 31 rounds of official negotiations, 19 rounds of ministerial-level talks and four summits amongst state leaders had taken place.

In the joint statement Sunday, the leaders said they value India’s role in the bloc and reiterated that “the RCEP remains open to India.”