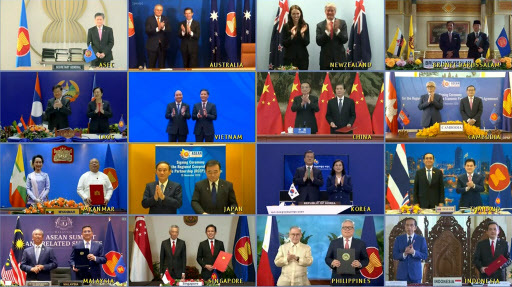 Leaders and trade ministers of 15 Asia-Pacific nations posing for a virtual group photo during the 4th Regional Comprehensive Economic Partnership Summit (Yonhap)
The Ministry of Culture, Sports and Tourism expects the Regional Comprehensive Economic Partnership, which South Korean President Moon Jae-in signed Sunday with his counterparts from 14 partner countries, to set the stage for the expansion of Hallyu.

“We expect this deal to improve the environment for the expansion of Hallyu content in member countries and also provide legal grounds for (cultural content) exporters,” Culture Minister Park Yang-woo said in a statement. Park also added that the ministry would continue to actively participate in bilateral and multilateral FTA negotiations in the future.

The RCEP involves 10 members of the Association of Southeast Asian Nations as well as South Korea, China, Japan, Australia and New Zealand.

The Culture Ministry said the RCEP would lower trade barriers in the game, audiovisual and tourism markets in Japan and Southeast Asian countries, which account for 70 percent of the export market for Korean content creators. The ministry pointed to the gaming industry as an example of a market that is likely to benefit from this deal, saying it removes uncertainties stemming from changing import policies in countries such as Japan, the Philippines and Malaysia.

According to the deal, Japan agreed to fully open all of its cultural services markets, except for the audiovisual post-production and broadcasting sectors.

The Philippines agreed to remove all barriers to foreign investment in its gaming industry, while also allowing up to 51 percent foreign capital in the animation, music and TV production sectors.

Malaysia agreed to open up the internet and mobile gaming industry, and Thailand will increase its foreign capital limit to 49 percent for the music production industry.

For the tourism industry, the ministry said, all the trade barriers in Japan and Myanmar have been removed under the RCEP.

The deal also set regional norms for copyright protection in countries that have not signed the World Intellectual Property Organization Copyright Treaty or the Performances and Phonograms Treaty, the Culture Ministry added.