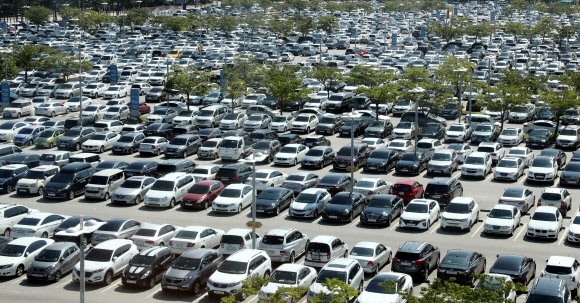 South Korean parking lot is packed with cars (Yonhap)
It is not an exaggeration to say that out of every 10 cars you encounter on the roads of South Korea, six or seven of them are Hyundai or Mercedes-Benz.

Although car brands and models have diversified over the years in a country where a car is owned by every 2.4 people, the brand everyone thinks of when it comes to domestic cars is Hyundai. In the case of imported cars, Mercedes-Benz maintains the largest share of the pie.

Despite the latest coronavirus pandemic, sales of imported vehicles continued to grow here, with the number of newly registered imported cars recording 16,725 units in February, according to the Korea Automobile Importers and Distributors Association. It was a 0.8 percent jump from the same period last year.

Mercedes-Benz topped the list with sales of 4,815 units, maintaining its lead with a growth of 33.3 percent on-year.

As of last year, the German automaker marked 32.1 percent market share in the Korean imported car market, the highest figure ever achieved by a foreign carmaker here. Its market share was 29.5 percent as of 2017.

Hyundai Motor -- whose cars have enjoyed nicknames of “national car” for Sonata and “daddy’s car” for the Grandeur -- has also seen an uptrend in domestic sales, surpassing 700,000 units in 2019 for the first time since 2002, when 732,549 units were sold amid FIFA World cup promotion hype.

According to the Korea Automobile Manufacturers Association, the country’s domestic car market was led by Hyundai Motor at 49 percent last year. It was followed by its sister company Kia Motors (33.7 percent).

Benz as pronoun for luxury

Lee Seong-jae, a 20-something office worker in Seoul, says there is just something special about the Benz' three pointed star on the hood.

“Benz, of any class, has been a pronoun for success for so many years, that even though I know that there are more choices and even a higher luxury brand, at least my first car of choice would be a Benz.”

It was perhaps because back in his childhood, the most luxury imported car brand he was exposed to was Benz.

The very first Benz was introduced to Korean market via dealership Han Sung Motor in 1985. The German automaker officially kicked off sales in 1987 when the South Korean government lifted an import ban on foreign cars, moving away from domestic market protectionism.

Benz entered the Korean market not with the relatively affordable C-Class, but with it’s flagship model at the time: the second generation S-Class 560 SEL. The price of 560 SEL was above 200 million won, about the same price as a luxury house in Seoul in the 1980s. 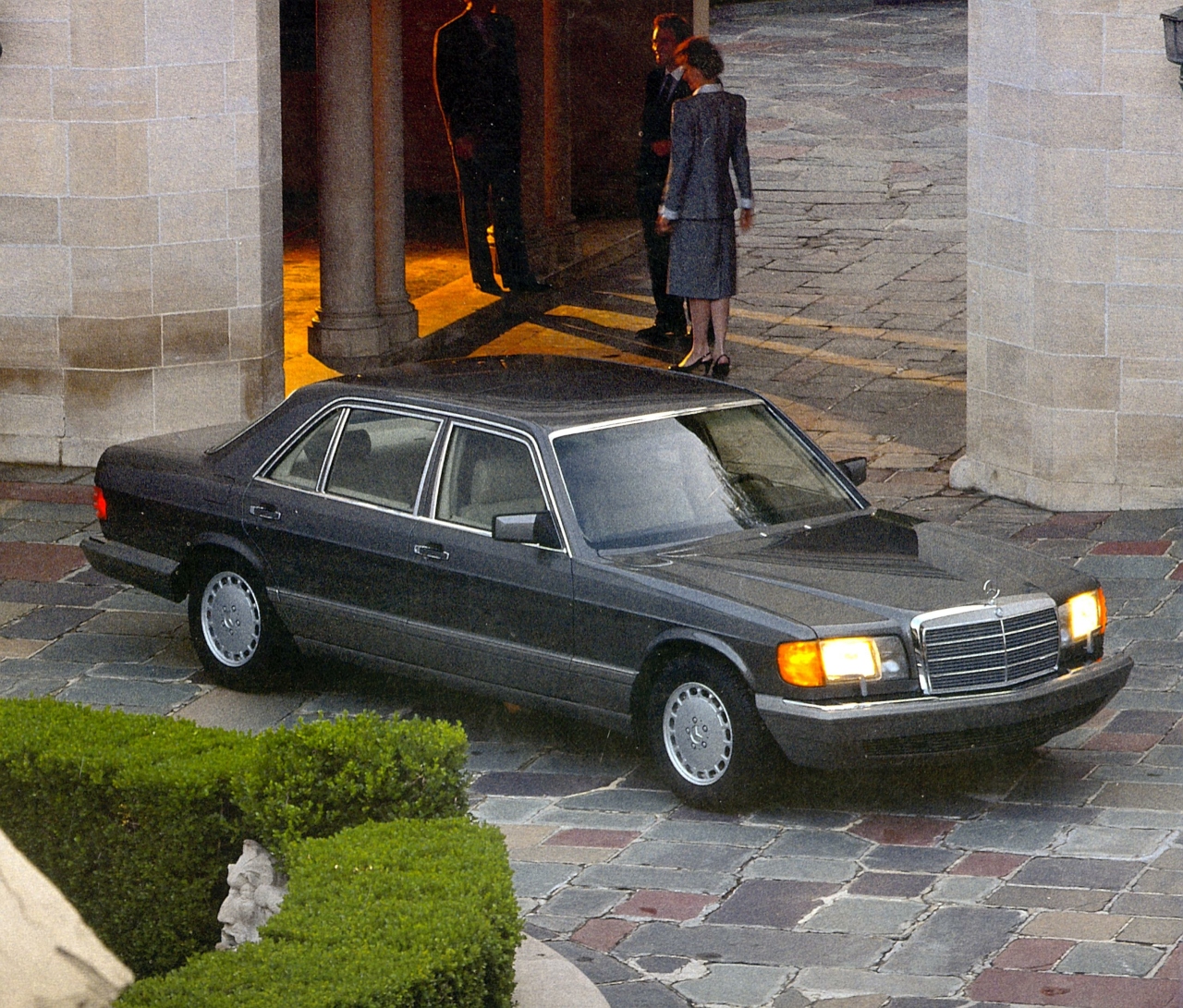 Mercedes-Benz 2nd generation S-Class (Mercedes-Benz)
“The German luxury car has become so common in Korea now, especially in the posh district of Gangnam. But Benz has long been associated with success and ultimate luxury, since it was used as a president’s car in 1990s,” said an official who has been in the automotive industry for 20 years.

Until the 1990s South Korean presidents had used US sedans such as Cadillac and Lincoln, as Korean carmakers did not have the technology to renovate the presidential state car with bulletproof, tempered glass and fire prevention functions.

Experts say Koreans’ priority on how others look at you also applies in purchasing the expensive, imported automotive products.

“The So-called ‘hachagam’ has become a new buzzword among car owners in Korea,” said professor Kim Pil-soo of automotive engineering from Daelim University.

Hachagam is a play of words from “seungchagam,” which refers to the level of comfort you feel in a vehicle while driving. By changing up the first syllable, hachagam refers to the feeling when you step out of the vehicle, preferably to be met by envious looks.

“Many say hachagam is more important than seungchagam, which is also the reason why Koreans opt for imported car brands than local cars to enjoy others’ attention,” Kim added.

Needless to say, the vehicles associated with good “hachagam” have changed over the decades, and now include the likes of Rolls-Royce and Lamborghini among, which sold about 360 new cars here last year. The number of 476 million-won Rolls Royce Cullinans in Korea rose from zero in 2018 to 55 last year, while 630 million-won Phantoms rose from 4 units to 6 units. Even Lamborghini CEO Stefano Domenicali made a rare visit to Korea last year to meet reporters and customers, openly praising the Korean market one with great potential.

Despite a growing number of competitors, Benz has continued to enjoy a lead in the imported car market, also due to a series of scandals and controversies surrounding other popular imported car brands in recent years.

Aside from being the first to manufacture the country’s first automobile in 1975, Hyundai’s vast popularity is largely based on its strategies.

Market insiders say Hyundai maintains the largest market share because they continue to appeal to customers with regular launches of fully-changed models or facelifts.

“Hyundai Motor’s launch of new cars at relatively competitive price has worked out to consumers here, while foreign carmakers are relatively slower about new car launches. The consumers basically did not have alternative options but to buy Hyundai or Kia cars, honestly,” said Lee Hang-koo, a researcher at Korea Institute for Industrial Economics & Trade. 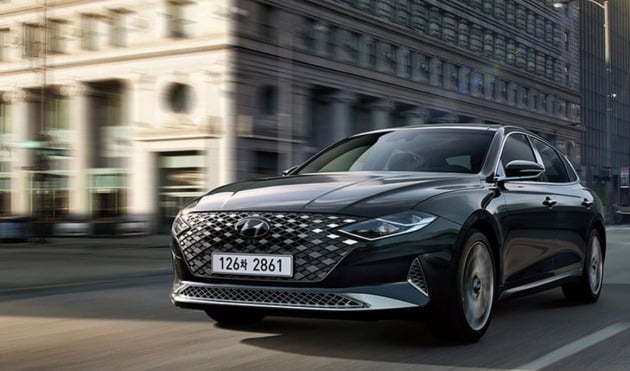 Hyundai Motor Grandeur (Hyundai Motor Group)
This strategy has been difficult by local rivals to follow, as many of them went through restructuring, labor-management disputes and ownership changes without the backing of sturdy capital.

Amid growing popularity of sports utility vehicles globally, Hyundai Motor has been quickly focusing on diversifying SUV lineups over the past few years.

From January to November last year, Hyundai Motor sold a total of 216,577 SUVs, taking 45.2 percent of the overall SUV market in Korea.

Almost one-third of the cars sold by Hyundai Motor last year were SUVs.

Aside from holding the largest share of the local car maker, Hyundai Motor has recently been initiating a transformation from the traditional combustion engines to future-oriented, smart mobility business.

In pledging the automaker’s focus on future mobility, Hyundai Motor Group Executive Vice Chairman Chung Euisun had said during a town hall meeting in October, “Carmakers are competing in oversupplied global markets and many of them will disappear over time. In the future, traditional vehicles are likely to account for 50 percent (of the market), with private air vehicles and robotics taking up 30 percent and 20 percent, respectively.”