According to the jury president Alejandro Inarritu, the nine-person jury had made the decision based on a unanimous vote.

“The film has been an astonishing journey, which was made possible with the artists that stood by my side. Above all, I wouldn’t have been able to shoot a single scene without great actors, and I thank them for that,” Bong said, adding that he “never imagined that he would one day touch the trophy. He called the award a “very great gift” from the Cannes festival, noting that this is the 100th anniversary of Korean cinema. 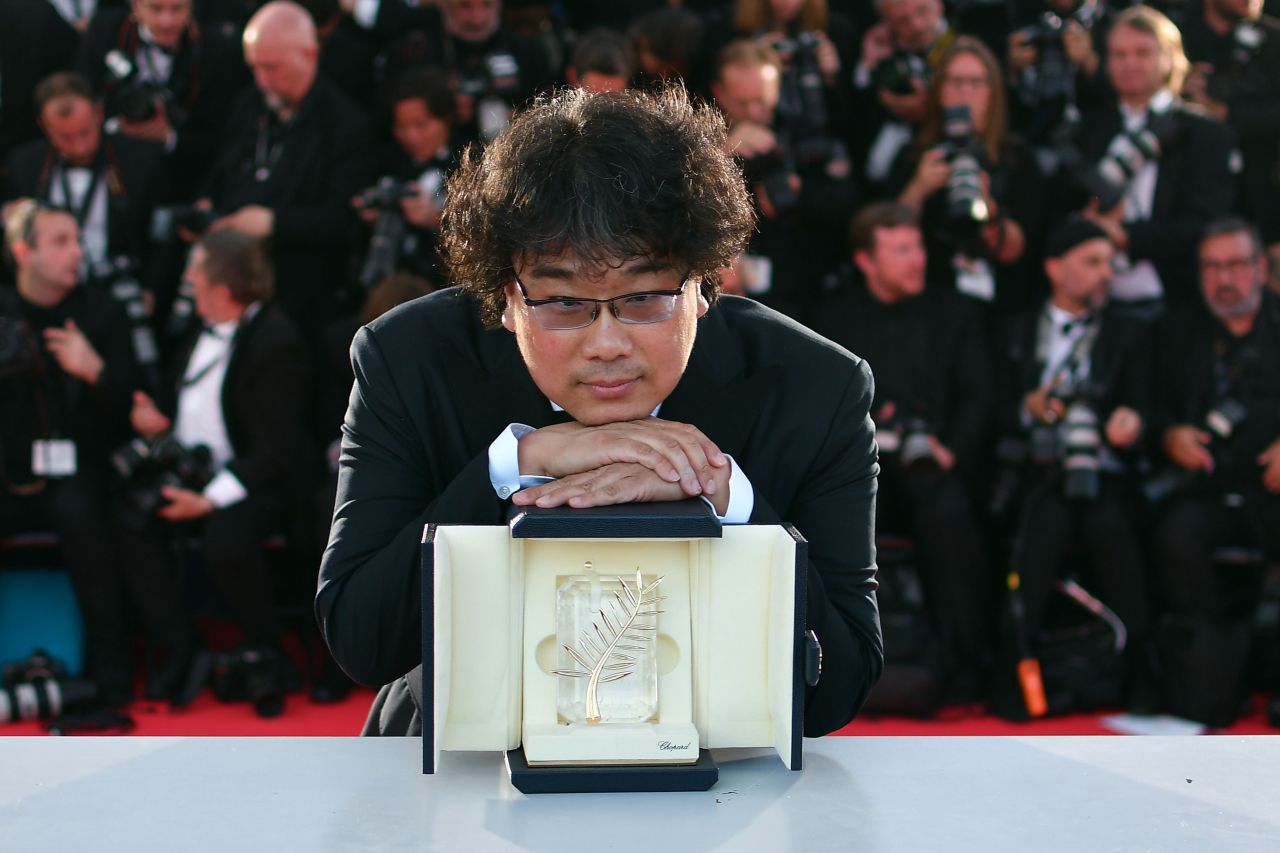 South Korean director Bong Joon-Ho poses during a photocall with his trophy after he won the Palme d’Or for the film “Parasite” at the Cannes Film Festival in Cannes, France, Saturday. (AFP-Yonhap)

“Parasite” is described to be a black comedy about unexpected series of events when a poor family of hustlers encounter a wealthy one. It stars Lee Sun-kyun, Cho Yeo-jeong, Choi Woo-shik and Park So-dam, and Song Kang-ho, a man considered one of the best actors in Korean cinema who has appeared in Bong’s most well-known films like “Snowpiercer,” “The Host” and “Memories of Murder.”

Inarritu was quoted by media that the jury “shared the mystery of the unexpected way this film took us through different genres” and that the film spoke in a “funny, humorous and tender way of no judgment of something so relevant and urgent and so global.”

The 49-year-old Korean is known for transcending traditional genres, and has been dubbed “Bong-tail (mix of Bong and details) by some fans for adding minute details in his films to satirize social issues. “The Host,” his biggest commercial success yet, appears to be a monster film but has elements of black comedy and social satire.

The genre-mixing film is slated to open in Korean theaters on May 30.

“Parasite” is the second film by Bong to be invited to compete in the festival, the first one being “Okja” in 2017. His victory also marks a second consecutive year that the Palme d’Or went to an Asian director, with Japanese filmmaker Hirokazu Kore-eda’s “Shoplifters” winning top honors last year.

As of now, Korean directors have grabbed the highest honors at two of what are considered three world‘s most acclaimed film competitions: Cannes, Venice Film Festival and the Berlinale. In 2012, Kim Ki-duk won the Golden Lion at the 69th Venice Film Festival with “Pieta”

Bong’s win was not the only ground-breaking one of the festival. Mati Diop’s “Atlantics,” about a migrant crisis through the eyes of Senegalese women left behind -- became the first black female director to compete for the top prize and made history by winning the second-top honor, the Grand Prize award.

The Jury Prize went to “Bacurau” by Kleber Mendonca Filho and Juliano Dornelles and “Les Miserables” by Ladj Ly, and the best director award to Jean-Pierre and Luc Dardenne for “Young Ahmed.” Best Screenplay was awarded to Celine Sciamma for “Portrait of a Lady on Fire.”

Antonio Banderas and Emily Beecham each took the Best Actor and Best Actress awards for their work in “Pain and Glory” and “Little Joe,” and the “It Must Be Heaven” by Elia Suleiman won Special Mention.