[ The Korea Herald – Send E-mail ]
Singapore chosen as Trump-Kim summit venue for neutrality, security
By Jung Min-kyung
Published : May 11, 2018 - 16:16
Updated : May 11, 2018 - 17:25
US President Donald Trump announced Singapore as the location for his unprecedented meeting with North Korean leader Kim Jong-un next month, raising speculations over why he chose the Southeast Asian city state over other symbolic venues.

White House Spokesman Raj Shah said Friday that the island nation was chosen because it could ensure the security of both leaders and provide neutrality. 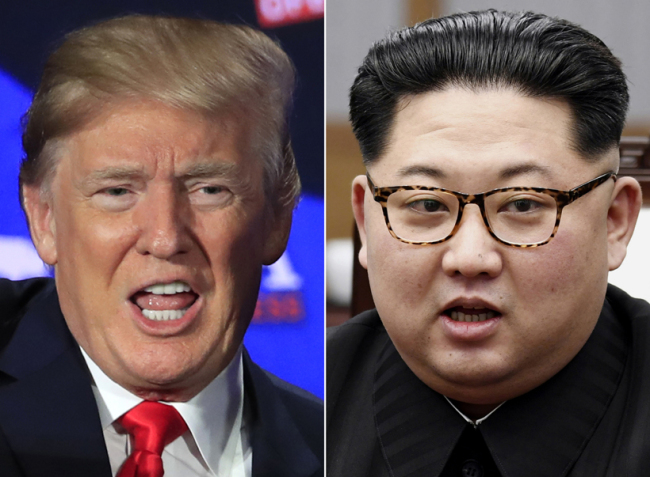 US President Donald Trump (left) and North Korean leader Kim Jong-un (right). (Yonhap)
Experts also picked “neutrality” as the keyword behind the venue choice, as it could offer a comfortable environment for the summit without both leaders stepping on each other’s “home turf.”

“Singapore is the best alternative option for both nations because it has maintained close diplomatic ties to the US and has also established relations with North Korea with a North Korean embassy on its soil” Shin Beom-chul, a senior fellow at the Asan Institute for Policy Studies, said.

Shin said other countries that were on the shortlist such as China, Russia, and Mongolia would have been preferred by the North, but the US would have minded their positions as global rivals or as an unfamiliar third party. On other Southeast Asian nations considered North Korea-friendly states, Kim has likely ruled out Malaysia due to the allegations that he had ordered the murder of his half brother there, while Indonesia lacks the necessary infrastructure, according to the Seoul-based expert.

Experts have noted the lack of experience North Korean jetliners have in long-distance flying, and some host nations in Europe such as Switzerland and Sweden were eventually scrapped because it was deemed difficult for Kim to physically get there.

Seoul’s presidential Cheong Wa Dae has said the border village of Panmunjeom, which served as the venue for the inter-Korean summit in April, was initially considered a top choice, but learned last week that the US has settled for Singapore.

Weeks earlier, Trump posted a vague question on Twitter asking whether Panmunjeom would be a “more representative, important, and lasting site,” compared to other numerous third party countries that were being considered for the summit.

Trump’s own preference was for the demilitarized zone between the two Koreas, but aides argued it would look too much like Trump going to Kim’s turf.

“It seems Trump had once seriously considered Panmunjeom as a viable option due to the symbolism it holds with its history of the divided Korean Peninsula and (the site directly linked to) possible end to border military tensions,” Kim Yong-hyun, a professor at Dongguk University, told local broadcaster YTN.

“(But) a neutral site like Singapore is where President Trump could somewhat stably lead the game.”

Trump’s announcement came on the same day the US Secretary of State Mike Pompeo returned from his most recent trip to Pyongyang, bringing with him three Americans who had been held prisoners in North Korea. The North’s state media said Kim and Pompeo reached a “satisfactory consensus,” on the issues discussed without further elaborating on the details.

“It seems the US and North Korea have already reached a certain level of agreement (on the issue of denuclearization) … and there is expected to be a comprehensive and swift deal under a large frame,” said Kim Dong-yub, a professor at Kyungnam University’s Far East Institute, indicating that both sides have managed to close the perception gap on denuclearization.

The US has been highlighting its commitment to achieving complete (or permanent), verifiable, and irreversible denuclearization carried out swiftly, without giving North Korea concessions until the completion of the process.

North Korea, meanwhile, is believed to prefer a phased approach, possibly in the hopes of using certain steps toward denuclearization as bargaining chips for guarantee of regime survival and formal diplomatic recognition from the US.

Singapore, located just off the southern tip of Malaysia, is a global business hub that is also one of the United States‘ most committed military partners. The US Navy has had a presence there since 1968 and was granted access to some Singapore military facilities in 1990.

The Trump-Kim summit is scheduled to take place on June 12. The specific venue within Singapore is yet to be announced.

Meanwhile, as of Thursday morning, North Korea has yet to officially announce the summit venue and date.