[ The Korea Herald – Send E-mail ]
Seoul to re-examine arrival of N. Korean restaurant workers
By AP
Published : May 11, 2018 - 16:06
Updated : May 11, 2018 - 17:55
South Korea said Friday it will look closer into the circumstances surrounding the arrival of a dozen North Korean restaurant workers in 2016 after a television report suggested some of the women might have been brought to the South against their will.

Unification Ministry spokesman Baik Tae-hyun did not provide a clear answer on whether the women could be returned to North Korea if it‘s confirmed they didn’t want to come to South Korea.

Seoul had previously said it sufficiently confirmed the women‘s free will in escaping from the North and resettling in the South. North Korea has accused South Korea of abducting the 12 women who were working in China and demanded their return.

Baik was speaking in response to a report by JTBC, which on Thursday aired an interview of a man it said was the manager of a restaurant in China where the women had been working. The man, who’s now also in South Korea, said he carried out the escape under plans arranged by South Korea‘s National Intelligence Service and that the women were brought along without knowledge of where they were going. 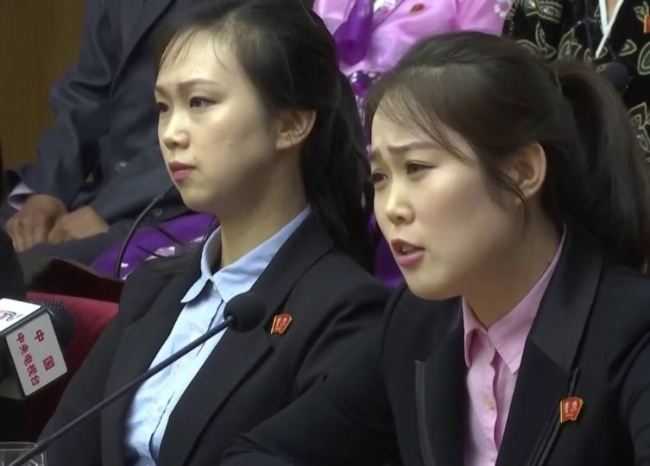 (AP)
JTBC also interviewed four women who it said were among the group that arrived in the South. They said they didn’t know where they were headed to until they reached the South Korean Embassy in Malaysia and that they wish to see their parents again.

Even though South Korea said previously it had confirmed the women‘s free will, Baik on Friday admitted that ministry officials have never been able to directly interview the women who were being protected by the NIS. The spy agency didn’t answer several phone calls seeking comment.

“New claims have been made on how the North Korean workers escaped and arrived in South Korea and whether they were acting on their free will,” Baik said. “For now, I can only say there‘s a need to confirm whether these claims are true.”

When the restaurant workers arrived in 2016, South Korea’s then-conservative government said it represented the largest group defection by North Koreans to the South since North Korean leader Kim Jong-un took power in 2011.

The ministry then said the North Korean-run restaurants overseas were suffering economically because of strengthened sanctions and that the workers who escaped said they were struggling to meet demands from North Korean authorities that they earn foreign currency. South Korea‘s liberal government, elected last year, has reached out to North Korea in recent months in attempting to settle the international standoff over Kim’s nuclear program.

More than 30,000 North Koreans have fled to South Korea since the end of the 1950-53 Korean War, according to the South Korean government. (AP)