During the meeting with reporters, a senior Cheong Wa Dae official said South Korea’s President Moon Jae-in stressed the need for holding a three-way summit during his phone call with Trump on April 28, a day after the inter-Korean summit.

“President Moon talked about the idea of a meeting of the two Koreas and the US,” said the official, who requested anonymity, citing official rules. “I can’t publicly comment on President Trump’s response, but he showed interest (in the idea).”

Even if the US and the two Koreas were to agree on the summit, holding the event would take longer than expected as Trump chose Singapore over Panmunjeom as the location for his first meeting with North Korea’s leader Kim Jong-un.

Trump, who had floated the idea of meeting with Kim at Panmunjeom after the inter-Korean summit on April 27, announced Thursday that the summit with North Korea would take place on June 12 in Singapore. 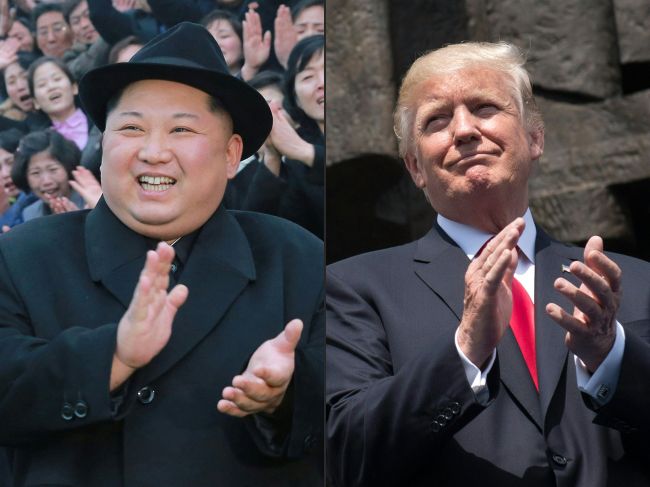 North Korea`s leader Kim Jong-un and US President Donald Trump. Yonhap
Cheong Wa Dae had thought that if the US-North Korea summit took place at the border village of Panmunjeom, located about 60 kilometers from Seoul, Moon could join the two leaders for a subsequent meeting.

“We don’t think the US-North Korea summit in Singapore will immediately lead to a three-way summit,” said the Cheong Wa Dae official. “(President Moon) can join (Trump and Kim) easily if the summit takes place in Panmunjeom.”

Cheong Wa Dae downplayed the possibilities that Moon would travel to Singapore for the US-North Korea summit, with speculation emerging that the Trump-Kim meeting would be attended by other leaders in the region.

According to a report from Japanese media outlets, Victoria Coates, a senior director on the US National Security Council, told reporters at the White House Thursday that Moon and China’s president Xi jinping could travel to Singapore for the US-North Korea summit.

The decision to hold the summit in Singapore appears to have left Seoul disappointed. Cheong Wa Dae said Panmunjeom had been its “top choice” until presidential security adviser Chung Eui-yong was informed by his US counterpart John Bolton last week about the choice of Singapore.

“From our perspective, Panmunjeom could have been a better choice, as it is a place symbolic of the division of the two Koreas,” the Cheong Wa Dae official. “North Korea and the US made a decision. We respect that.”

According to the official, North Korea preferred Pyongyang as the summit location while the US wanted to hold the event in Geneva, Switzerland. The two sides eventually settled on Singapore for its neutrality and flight distance.

South Korea had proposed Panmunjeom as an ideal location and it was considered the most likely venue, the official said. The issue was seriously discussed during a phone call between President Moon Jae-in and Trump on April 28.

During the one-hour conversation, the two leaders exchanged their views about holding the summit either in Panmunjeom or Singapore. Songdo International City in Incheon was mentioned as well, but not as a serious option, the official added.

“Between Singapore and Panmunjeom, Panmunjeom was the top choice,” the official said. “Their discussion was mostly about Panmunjeom and President Trump’s questions were mostly devoted to Panmunjeom.”

The expectation was heightened when Trump tweeted a suggestion that his planned meeting with Kim could take place at the Peace House inside Panmunjeom, the site of the inter-Korean summit.

Such mood shifted after security adviser Chung was informed by Bolton that the summit would take place in Singapore. It was the first time the South Korean government was officially notified by the US about the plan, the official said.

While the news was briefed to Moon, Cheong Wa Dae suspected there might be a chance for a change of plan, until Trump announced he would meet with North Korean leader Kim on June 12 in Singapore.