With North Korea’s leader Kim Jong-un having invited President Moon Jae-in to Pyongyang for a summit, the focus is now on how South Korea can coordinate with the United States to leverage the initiative as an opportunity for denuclearization talks.

However, challenges loom large as the allies may clash over the approaches to achieving the goal of denuclearization, analysts said, as Moon may face a tough choice between going along with Trump‘s “maximum pressure” campaign and engaging with the North to ease cross-border tensions after the Olympics.

“It would be like selling ice to the Eskimo,” said Shin Beom-chul, a professor at the Korea National Diplomatic Academy. “It’s extremely difficult to both maintain denuclearization coordination with the US and build trust with North Korea for dialogue.” 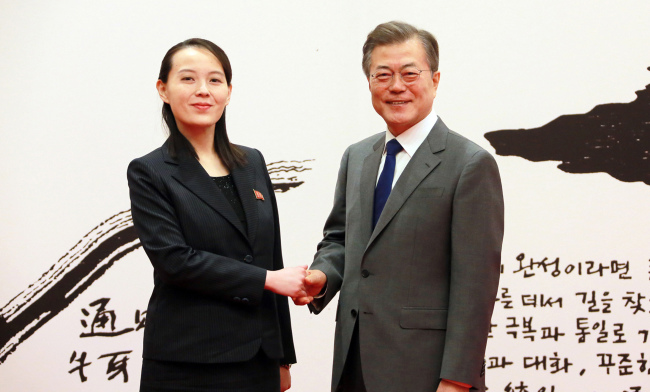 “We have to convince the US, which sees North Korea’s recent moves as propaganda, of the need for talking with North Korea. And at the same time, we should tell North Korea that returning to the denuclearization talks will help them eventually.”

On his way to Washington on Saturday, US Vice President Pence told reporters that “there is no daylight” between the United States, South Korea and Japan in their efforts to isolate North Korea economically and diplomatically until they abandon their nuclear ballistic missile program.

Leaving South Korea without any interaction with North Korea‘s high-level delegates to the PyeongChang Winter Olympics, Pence said he would oppose talks between the two Koreas until the North agreed to open negotiations on ending its nuclear program, according to the AP.

Pence has also spent the days leading up to the Olympics highlighting North Korea’s human rights abuses and cross-border military provocations -- particularly when he met with North Korean defectors and visited the memorial of Cheonan vessel, which is widely believed to have been torpedoed by the North in 2010.

While Moon has pledged to support the Trump administration‘s “maximum pressure” campaign of sanctions and isolation, he might not be as enthusiastic if the US ratchets up pressure and threatens North Korea with a military strike.

“North Korea’s proposal of an inter-Korean summit is its post-PyeongChang strategy,” said Nam Sung-wook, a professor at Korea University’s department of unification and diplomacy, in an interview with local media.

“Without inter-Korean coordination, the US would return to pressuring North Korea. The summit with Moon is the only way to present a united front with South Korea and therefore avoid international sanctions.”

During his meeting with Kim Jong-un’s sister Kim Yo-jong on Friday, who visited the South as a special envoy for the North Korean leader, Moon said North Korea should play a more active role in opening up direct talks with the US.

Concerns are rising that North Korea‘s belligerent response to the resumption of the joint exercise would prompt the Trump administration to seriously consider a “bloody-nose strike,” a preventive strike against the North’s nuclear and missile facilities.

“I don’t think there is much to expect in the inter-Korean relations unless there is improvement in relations between North Korea and the US,” said Kim Yong-hyun, a professor of North Korean studies at Dongguk University in Seoul.

“It has to create a virtuous cycle where improvement on the inter-Korean ties can bring positive influence on the US-North Korea denuclearization talks.

In 1999, US Defense Secretary William Perry launched the “Perry Process” to freeze North Korea’s missile development in exchange for normalizing diplomatic relations. Prior to the 2007 summit, there was the Feb. 13 Agreement, in which North Korea agreed to close its main nuclear reactor in exchange for aid.