Kang made the remark during a dinner meeting Saturday with French Foreign Minister Jean-Yves Le Drian while explaining the consistent efforts South Korea is making to resolve the North Korean nuclear issue and promote peace on the peninsula, her office said.

Le Drian, who was in the South as a special envoy of French President Emmanuel Macron for the PyeongChang Winter Olympics, said in response that France welcomes the resumed inter-Korean talks and hopes the momentum of dialogue will continue after the Olympics. 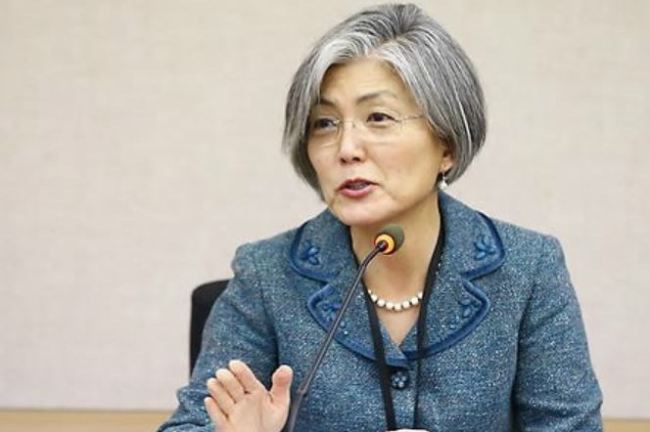 Foreign Minister Kang Kyung-wha (Yonhap)
He also said the two countries should work closely together to help the North make the right decision.

Noting that cooperation between the two countries has been expanding in various areas, the two top diplomats agreed to cooperate closely to further strengthen their bilateral relations through exchanging high-level visits and annual strategic talks at the foreign minister level, according to the ministry.

Relations between South and North Korea have warmed rapidly since North Korean leader Kim Jong-un said in his New Year's Day address that the country was willing to participate in the PyeongChang Olympics. The two Koreas have since worked out the details and the North has sent not only athletes but also hundreds of other people as part of a cheering squad and an art troupe.

The North's leader also sent his sister, Kim Yo-jong, and the country's ceremonial head of state, Kim Yong-nam, to the South. The delegation paid a visit to South Korean President Moon Jae-in on Saturday and delivered the North Korean leader's invitation for Moon to visit the North.

The abrupt peace offensive by the North, following years of escalating tensions that culminated in the North conducting numerous missile tests and the detonation of its strongest nuclear device in 2017, has raised concern among conservatives that the regime may be using the rapprochement with the South to undermine international sanctions against it.

Meanwhile, Le Drian attended a ceremony to launch a project to modernize the French Embassy building in Seoul and said the project shows how much importance France attaches to relations with South Korea.

Le Drian also said that France will be making preparations to host President Moon's visit to his country and that French President Macron is also expected to visit South Korea. The top diplomat said he plans to visit the South again as part of the preparations needed for the leaders' trips. (Yonhap)