According to Seoul’s presidential office, North Korean leader Kim Jong-un’s invitation to Moon was conveyed by his younger sister, Kim Yo-jong, during Moon’s meeting with the North Korean delegation at Cheong Wa Dae on Saturday. 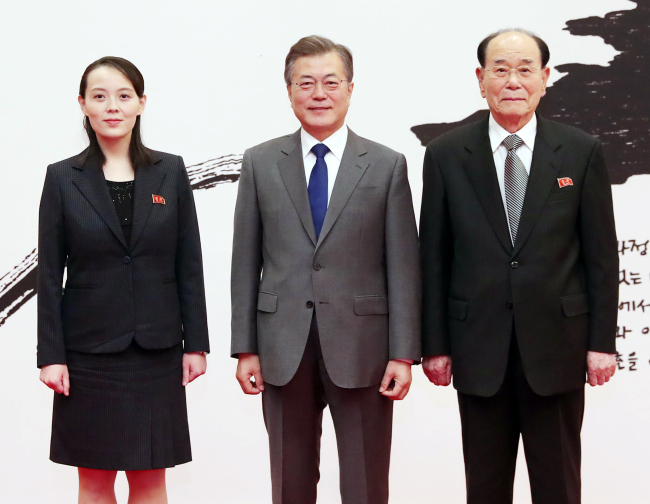 President Moon Jae-in poses with North Korea's Kim Yo-jong (left) and Kim Yong-nam (right) at the presidential office in Seoul on Saturday. Yonhap
Kim Yo-jong came to the South on Friday as a special envoy of the North Korean leader.

“(Kim Yo-jong asked Moon) to visit Pyongyang at a time convenient to him. President Moon responded by saying that the two sides should work on establishing the right conditions to realize the meeting.”

In addition, the tougher-than-ever stance the US is taking on the Kim Jong-un regime is another obstacle for Seoul. 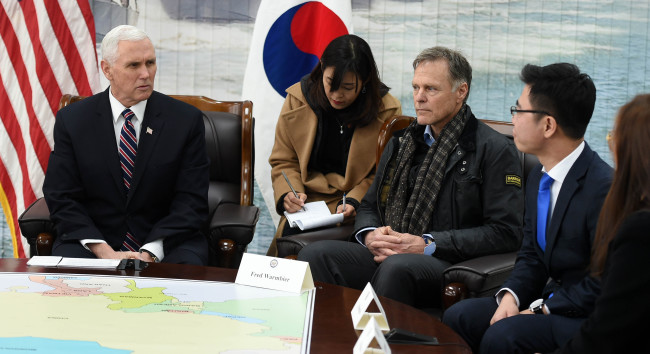 US Vice President Mike Pence meets with Fred Warmbier, father of Otto Warmbier who died after being held captive by North Korea, and North Korean defector Ji Seong-ho at a South Korean naval base in Pyeongtaek, Gyeonggi Province on Friday. Yonhap
In recent weeks, US President Donald Trump has veered away from fiery threats against the North, but he has taken to highlighting the brutality of the regime.

US Vice President Mike Pence has also dedicated much of his time in South Korea to emphasizing the North’s human rights violations, and its status as a rogue nation.

On Friday, Pence met North Korean defectors, and visited the wreck of a South Korean warship sunk by North Korea in 2010. The attack on the ship, Cheonan, killed 46 South Korean sailors.

The US vice president also stressed his nation’s position several times on this trip to Seoul, and Tokyo.

“We’re going to make it crystal clear that our military, the Japanese self-defense forces, our allies here in South Korea, all of our allies across the region, are fully prepared to defend our nations and to take what is -- action is necessary to defend our homeland,” the vice president said in an interview with NBC aired Friday.

“We’re going to continue to put all the pressure to bear economically and diplomatically, while preserving all of our military options to see that that happens,” he added.

After his meeting with Japanese Prime Minister Shinzo Abe in Tokyo on Wednesday, he warned that Washington would soon announce the “toughest and most aggressive round of economic sanctions on North Korea ever.”

“President Moon said that US-North Korea talks should be held in the near future to improve inter-Korean relations, and asked the North to take a proactive approach to the matter,” Kim Eui-kyeom said.

However, the road to US-North Korea talks is unlikely to be easy.

North Korea continues to defy increasingly tough sanctions, and states at every opportunity that its nuclear weapons program is nonnegotiable.

Regardless of obstacles, Saturday’s meeting marks a historic milestone in inter-Korean relations.

Kim Yo-jong, whose presence has drawn far more media attention than the chief delegate, came to the meeting carrying a blue folder, appearing tenser than she had on the previous day, according to pool reports.

The inclusion of Kim Yo-jong in the North’s high-level delegation to the PyeongChang Olympics fed speculation that she may bring a personal message for Moon from her brother. Some local media have gone as far as to describe the meeting as “effectively an inter-Korean summit.”