The Japanese leader's call came in a bilateral summit held in Yongpyeong, 200 kilometers east of Seoul, on Friday. 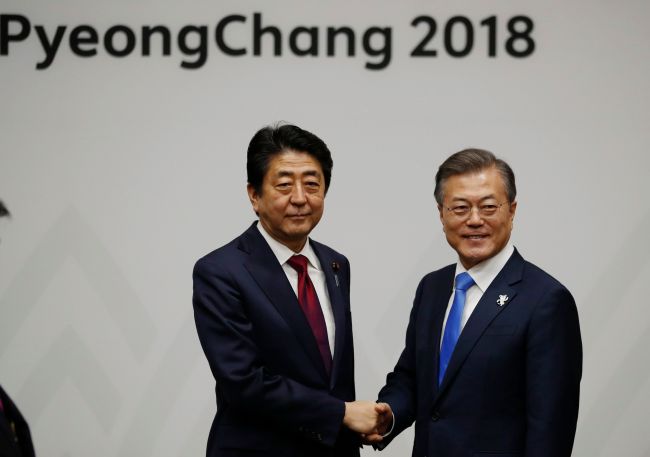 South Korea's President Moon Jae-in (right) shakes hands with Japan's Prime Minister Shinzo Abe during their meeting in Pyeongchang on Feb. 9, ahead of the opening ceremony for the Pyeongchang 2018 Winter Olympic Games. (Joint Press Corps. via Yonhap)
Abe stressed the need for what he called an "actual" change in the North's behavior, saying it was not the right time for Seoul and Washington to delay their joint military exercises, the ranking Cheong Wa Dae official told reporters, speaking on condition of anonymity.

"I understand what Prime Minister Abe said is not to delay South Korea-U.S. military drills until there is progress in the denuclearization of North Korea. But the issue is about our sovereignty and intervention in our domestic affairs," Moon told the Japanese leader, according to the official.
(Yonhap)