North Korean leader Kim Jong-un's sister expressed a wish for closer inter-Korean relations in her writing in the visitor's book at South Korea's presidential office prior to her meeting with President Moon Jae-in there on Saturday.

Kim Yo-jong visited the office, Cheong Wa Dae, in Seoul in her capacity as a special envoy of North Korea's leader, along with the North's ceremonial head of state Kim Yong-nam. 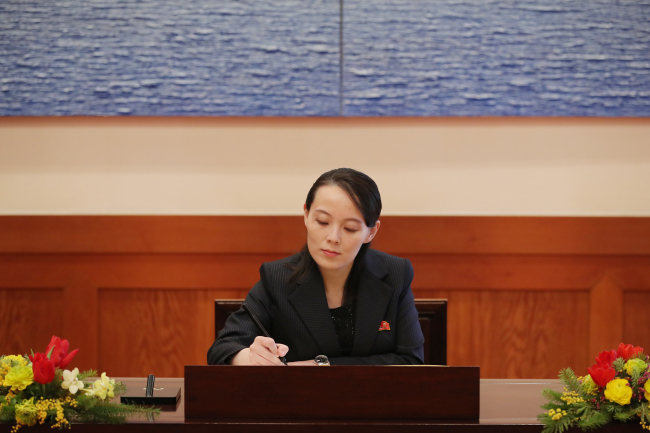 Kim Yo-jong at Cheong Wa Dae on Saturday (Yonhap)
"I expect Pyongyang and Seoul to get closer in the hearts of our (Korean) people and the future of unification and prosperity will be advanced," Kim Yo-jong wrote in her Korean-language entry to the guest book.

Kim Yong-nam also wrote in his own handwriting that it is the Korean people's wish to be united and make concerted effort for unification.

The top delegates from Pyongyang delivered their leader's letter to Moon before having lunch together at Cheong Wa Dae. 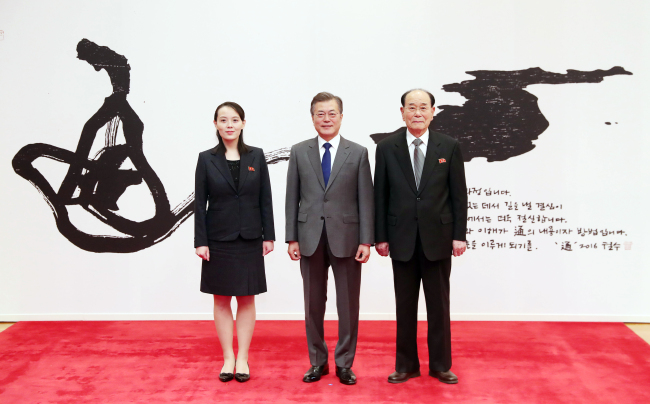 From left: Kim Yo-jong, Moon Jae-in, Kim Yong-nam at Cheong Wa Dae on Saturday (Yonhap)
Moon took a commemorative photo with the North Korean guests prior to their talks.

Notably, a painting and calligraphic work by South Korean artist Shin Young-bok was used as a background of the photo.

The art work features a Chinese character meaning "mutual understanding" and a Korean Peninsula map, along with a lengthy writing by Shin to the effect that efforts to find out and create new roads amid an impasse are essential to overcoming division and achieving unification.

"Before posing together for the photo, President Moon explained the meaning of the art work to Kim Yo-jong and Kim Yong-nam," said a presidential aide. (Yonhap)