Incheon International Airport (Yonhap)
But South Korea’s largest airport did not rest on its laurels. As part of its long-term vision to become the world’s third-biggest airport by year 2023, the airport has opened its second passenger terminal, marking the culmination of a nine-year construction project that cost some 5 trillion won ($4.67 billion).

Eighty-six other air carriers, including the country’s second-largest by sales, Asiana Airlines, will continue to operate in Terminal 1 due to space capacity, boarding convenience and operating efficiency.

Commencing operation of the brand new landing strip was Korean Air’s flight KE624, which departed from Manila and landed in Incheon around 4:20 a.m.

A total of 235 flights -- 117 departing and 118 arriving -- operated in Terminal 2 on its opening day, transporting 51,161 inbound and outbound passengers, according to the airport’s operator.

The new terminal, which is about 71 percent the size of the first one, is to handle 18 million passengers annually, rising to 46 million once additional wings are completed.

The expansion was largely a foreseeable move, as the airport has gained fame for its high-tech, user-friendly facilities in less than two decades.

It was named best airport in the world for 12 consecutive years from 2005 to 2016 in the airport service quality awards by Airports Council International. 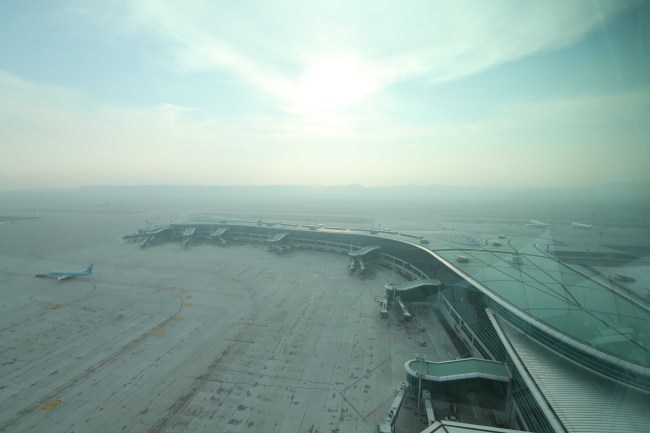 A view of Incheon Airport`s Terminal 2 from the control tower. (Yonhap)
The airport has also been praised for its advanced freight capacity -- with a mere 0.0001 percent baggage mishandling rate, according to its operator.

Despite such accomplishments, South Korea was determined to take its airport to the next level.

A major challenge in the process was the relocation of the construction site in the early stage of the project, which placed the two terminals 15 kilometers apart, a distance that would take six to seven minutes by airport express railway and 15 to 18 minutes by shuttle bus.

The original blueprint was to locate T2 in the south vicinity of T1 to create transport synergy, but NACO, the Dutch airport consultancy and engineering firm in charge, halted the idea in 2006, citing a lack of space and confusion over transportation.

nother hitch took place in 2012 as several key construction bids fell through, delaying the entire project by about two months.

Despite the setbacks, the second terminal was completed on time in late 2017. Backed by its renewed capacity to handle some 72 million passengers and 5 million tons of cargo annually, the airport rose from the world’s seventh-largest to fifth-largest in size, according to officials.

One of the key features of the new terminal is its high ceiling, which is about 5 meters taller than that of the first terminal.

Spinning off from the old Gimpo Airport, which now serves mostly domestic flights and short-haul regional flights, Incheon Airport has always featured a sense of open space and an eco-friendly landscape.

The walking distance from the transit center -- shortened to 59 meters from the previous 223 meters -- and the sufficient number of self-check-in kiosks -- increased to 3.44 units per 1 million visitors from 1.7 units per million -- are to help passengers avoid possible delays prior to departure.

Overcrowding will also be alleviated, as entrances to the secured area are clustered on either side of the terminal on a closer interval than in the first terminal, making it easier for waiting passengers to move to a quicker line based on information indicated on digital signboards.