Under a project called “Artport,” Incheon International Airport has spent more than 18 billion won on displaying artworks throughout the terminal, ranging from paintings to installations.

The latest 4.6 billion won project is highlighted by five artworks by renowned artists including French sculptor Julius Popp and German media artist Xavier Veilhan. The project was curated and displayed by a consortium led by Daehong Communications, Gana Art and design be:CHE.

The airport wanted to enhance the travel experience of passengers by using artworks at the terminal, the airport’s officials said in explaining the project. The airport even tried to get government accreditation as an art museum, it added. 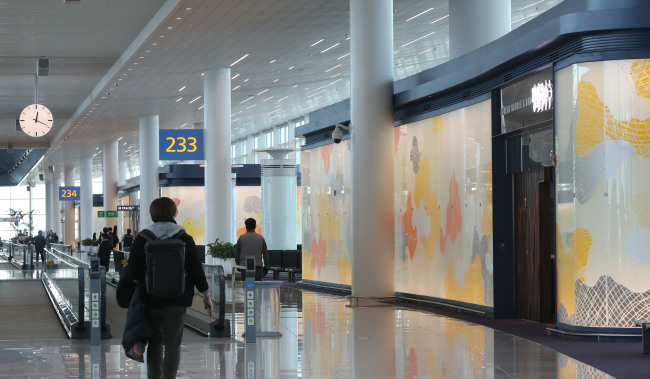 “Wings of Vision” by Korean artist Jinnie Seo (Yonhap)
“Airports are (perhaps) the most optimal places to experience artworks. Airports -- which is marked by constants movements -- arouse excitement and curiosity in travelers who are on the verge of departure,” Jinnie Seo, whose work “Wings of Vision” is installed at the new terminal, said in a press statement. “Wings of Vision” is an installation piece composed of 19 pavilions ornamented with cloud shapes, that run throughout the gatehouse.

For Popp, airports are places that “(enable passengers) to “encounter and experience things that are different and unfamiliar to them.” 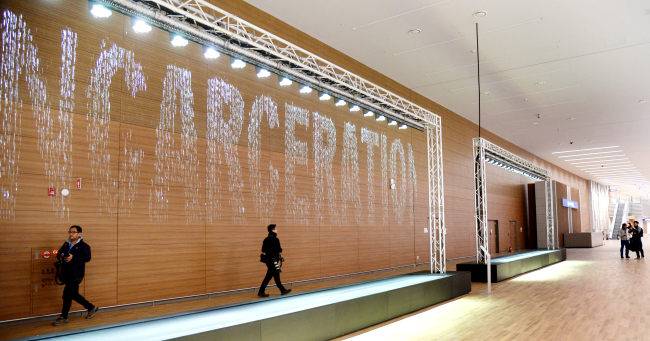 Germany-based media artist Julius Popp’s work “bit.fall” installed at the baggage claim area of Incheon Airport Terminal 2 (Park Hyun-koo/The Korea Herald)
“I want people who visit the airport to see my work as a metaphor for communication and exchange among different cultures,” Popp said in an email interview.

Meanwhile, the airport also has considered the practical aspect of displaying artworks at the airport’s public space.

With Popp’s work, which uses water as its medium, the airport wanted to create a sense of comfort in the baggage claim area where passengers could feel tired, said Yeom Soo-hyun, general manager at Gana Art.

While hoping that his work will add a “poetic aspect” to passengers’ travel experience with his work “Great Mobiles,” French artist Xavier Veilhan said that the installation art could also serve as a marker for passengers trying to find their way about the terminal. 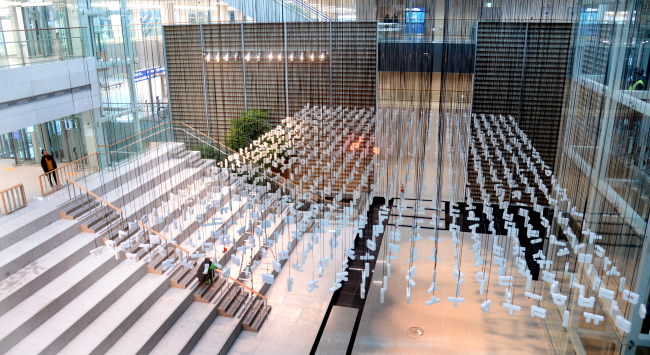