[ The Korea Herald – Send E-mail ]
Moon vows to uphold spirit of Gwangju uprising
Once neglected ceremony turned into emotional tribute to nation‘s blood-paved democratization
By Jo He-rim
Published : May 18, 2017 - 16:32
Updated : May 18, 2017 - 18:13
GWANGJU -- Over the past years, the May 18 National Cemetery in this staunchly liberal city in the southwest has been the subject of implied neglect by national leaders, with a sense of dissatisfaction roaming in the annual commemoration of the pro-democracy uprising in 1980.

It couldn’t have been more different this year. 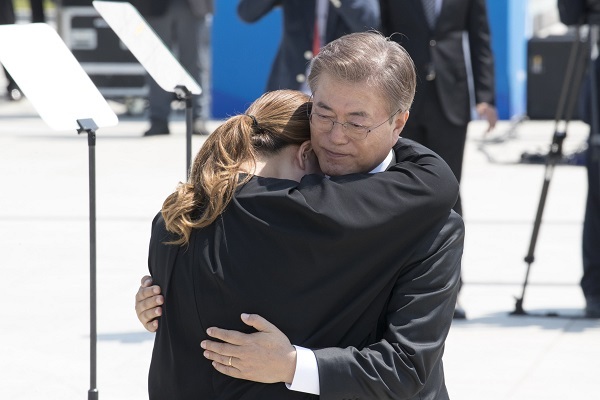 President Moon Jae-in hugs Kim So-hyung, whose father was killed during the May 18th Gwangju Uprising, during a ceremony marking the 37th anniversary of the democratic movement in the southern city of Gwangju on Thursday. (Yonhap)
“I dare tell you here and now that the new Moon Jae-in government stands in line with the legacy of the Gwangju Democratization Movement,” said Moon in his address at the national cemetery, vowing to protect and further advance the country’s hard-earned democracy.

The 37th-year anniversary was honored with the biggest number of participants, some 10,000, including President Moon himself, since the day was designated as a national anniversary in 1997.

For the first time in nine years, the crowd sang “March for the Beloved,” a song symbolic of the spirit of the 1980 civilian uprising.

Many shed tears and expressed satisfaction at the way the day was remembered and patriots honored.

The May 18 Democratic Uprising was a pro-democracy movement in 1980, where citizens protested against the military dictatorship of Gen. Chun Doo-hwan. He took power through a military coup and expanded the martial law throughout the country, shutting down universities and banning political speeches.

As more than 200,000 Gwangju citizens took to the streets, hundreds were killed and wounded during the nine-day protest as Chun ordered the most violent crackdown in the nation’s modern history.

At the time, it was defined as a riot with North Korea masterminding the developments.

Although the massacre was later officially recognized by the government as a grassroots rebellion against the dictatorship, Gwangju’s strong association with the liberal political faction amid the acrimonious rivalry between the left and the right has made it difficult for many conservatives to truly accept it.

The previous conservative presidents Lee Myung-bak and Park Geun-hye only paid tribute in the annual event in their first year in office. After that, prime ministers and other high-ranking officials took on the role.

During their term, “March for the Beloved” couldn’t be sung by the participants. It was only allowed to be played by a choir. President Moon ordered last Friday that the song be sung as part of the ceremony.

President Moon said he would conduct a thorough investigation into the killings and find out who is responsible for the bloody attack, indirectly pointing at the then-commander in chief, Chun himself.

“The new government will exert efforts in finding out the truth about that day, including who ordered the first shot (at civilians) and hold (the person in charge) to account.”

Moon also reiterated his earlier promise to include the May 18 spirit in the nation’s Constitution, so people can learn about and remember the country’s history of democratization.

The new leader’s support uplifted the sentiments of the survivors and the bereaved families.

“What Moon is doing is for the people of the nation. I am glad he has acted to acknowledge the historical event,” Yang Don-sil, 87, told The Korea Herald. She lost her sixth son, Kim Yong-pyo in the bloody crackdown.

Lee Chang-hee was arrested, tortured and jailed only two months after he enrolled at the Chonnam National University in 1980.

“I feel guilty to be alive in front of all the victims here,” the 55-year-old said, sitting in a wheelchair in the front of the stage. He said that he can now finally breathe, as he could not for the past 10 years with the conservative presidents in office.

Another survivor of the brutal incident recalled his experience as a trauma and refused to talk about it. Still, he felt strongly about the song, “March for the Beloved.”

For liberal politicians, the ceremony epitomized the change of the era, or the arrival of their era. Many turned emotional.

“I was touched how the whole new Republic of Korea revealed itself in a symbolic way through the May 18 memorial ceremony,” said the newly elected floor leader Woo Won-shik of the ruling Democratic Party of Korea, hailing the renewed tone of the long-neglected ceremony.

South Chungcheong Gov. An Hee-jung, who had competed with Moon during the Democratic Party primary, said that he was “so deeply touched that tears came out.”

“Regardless of progressive or conservative, this is what a nation is supposed to be like,” the governor said.

Liberal Seoul Mayor Park Won-soon spoke of hope and a new vision for the future.

“I believe that the past nine years of darkness, anger, and sorrow have ended, giving way to a new world of hope,” Park said. “We have come to live in a world in which the May 18 (democratization) spirit has been revived.”

Rep. Chung Woo-taik, floor leader and interim chief of the conservative opposition Liberty Korea Party, stood out during the ceremony by not singing along with the commemorative song.

“I understand that President Moon ordered for unison, but has never requested cooperation from the political circles over the issue,” he told reporters.