[ The Korea Herald – Send E-mail ]
President Moon Jae-in attends May 18 memorial ceremony
Moon vows to investigate culprit behind civilian deaths in 1980
By Korea Herald
Published : May 18, 2017 - 10:03
Updated : May 21, 2017 - 19:11
President Moon Jae-in on Thursday visited Gwangju to commemorate the 37th anniversary of the May 18 Democratization Movement and express respect to a city which had refused to yield to dictatorship.

“I dare tell you here and now that the new Moon Jae-in government stands in line with the legacy of the Gwangju Democratization Movement. It carries on the legacy of the 1987 June uprising, of the (late liberal President Kim Dae-jung’s) People’s Government, and of the (former President Roh Moo-hyun’s) Participatory Government,” Moon said in his commemorative speech.

“I hereby pledge to fully restore democracy in our land so that the souls of Gwangju may rest in peace.” 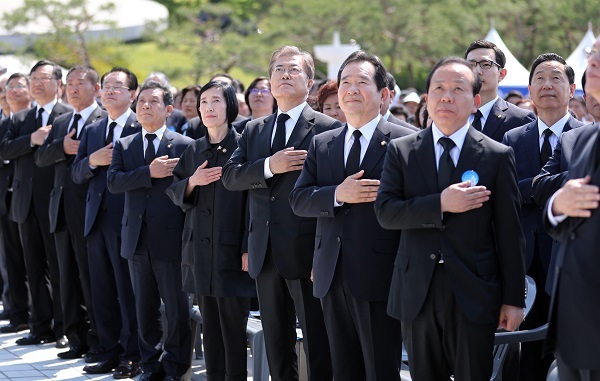 (Yonhap)
The May 18 memorial day refers to a pro-democracy uprising under former President Chun Doo-hwan, which led to hundreds of civilian deaths and extensive media control.

The president also vowed to investigate the tragedy in 1980, hinting at tracing back the events that year to then-Commander in Chief Chun himself.

“There are those who continuously try to distort and devaluate the May (18) movement, which is unacceptable,” Moon said.

“The new government will exert efforts in finding out the truth about that day, including who ordered the first shot (at civilians) and hold (the person in charge) to account.”

Finding out the truth is not a matter of progressive vs. conservative values, but one of common sense and justice, he added, cautioning against factional disputes.

Moon also reiterated his earlier promise to include the May 18 spirit in the nation’s Constitution, so people can learn about and remember the country’s history of democratization. 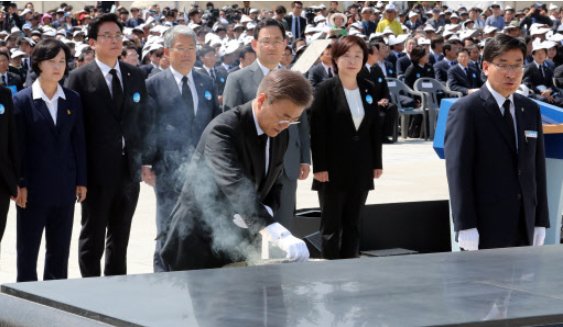 (Yonhap)
During the ceremony, which involved the largest crowd ever, the president and all participants sang along to “March for the Beloved,” a song dedicated to the victims of May 18.

Under the two previous conservative administrations, the song had been sung solely by a choir, raising disputes that the government refused to acknowledge the tragic event.

President Moon ordered Friday that the song be sung in unison by the entire audience.

Pi Woo-jin, who was appointed Wednesday as the new chief of the Ministry of Patriots and Veterans Affairs, also attended the event.