To ensure their uniqueness ― after they’ve shopped in faraway malls and tapped into store registries ― girls are using social media to claim dibs on their dresses.

A photo of Ashley McGowan’s floor-length black gown is on the prom Facebook page for her school in suburban Somers, New York.

She’s relieved that only one other classmate has posted a black frock.

“There’s an unwritten rule: the moment you buy it, you post it so it’s ‘your dress,’” explains McGowan.

A fashion advice website, Fashism.com, has even launched a Facebook-based registry called “Got Dibs” that allows users to track who’s wearing what to which high school event, and get feedback on their outfit before they wear it. 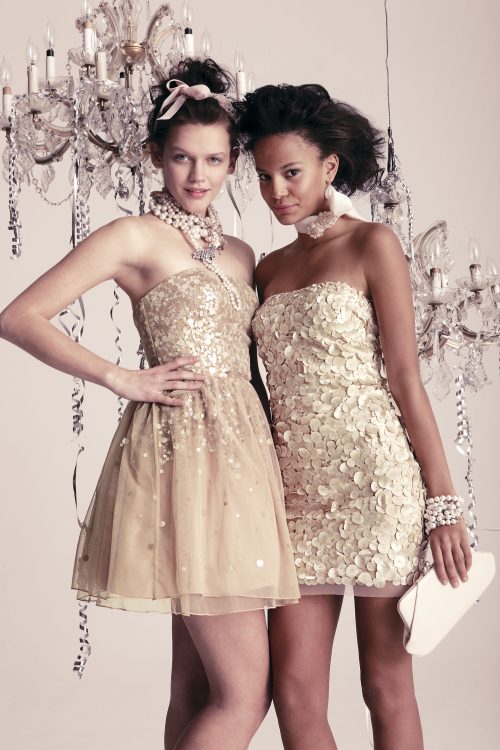 Models wearing dresses by Adriana Papell. Teenage girls largely live in a lookalike culture, wearing the same styles they got in the same stores as their friends. On prom night, though, the idea is to stand out on their own, making sure no one arrives to the big dance in the same dress. (AP-Yonhap News)
Amy Avitable, senior vice president of marketing for Lord & Taylor, which is partnering with Fashism.com on Got Dibs, says the project is a way to give girls an insurance policy that they’ll have something special, while making sure they won’t be second-guessing their outfit at the last minute.

Here’s how Got Dibs works: Girls can snap photos of themselves with the tags still on the dress and get instant advice on what shoes to wear, if the hemline is right or if the silhouette is flattering.

The opinions of peers, whether they are best friends or online “friends” from around the country, are key to the tech-savvy, fashion-loving consumer, says Ashley Granata, Fashism.com’s co-founder and chief marketing officer.

But for prom-goers, it’s the claim on a dress that matters most, she adds.

“When I was a junior, a freshman came to my prom in the same dress. I was mortified,” Granata recalls. “It was a pink satin, princess cut with scalloped neckline. I thought it was interesting and beautiful. I was known to have individual sense of style ― and then this trendy girl shows up in the same thing. Now I can say it’s really funny, but I was really upset about it.”

Hollywood stars make a strong impression by owning their looks, and teenage girls want to do the same, says Jane Keltner de Valle, fashion news director of Teen Vogue. They mimic celebrities with elaborate fashion fantasies and hair and makeup plans, but they also play the part of stylist by scouring magazines and websites for months to get ideas, then try to secure exclusivity.

All the preparation fuels anticipation of the prom, which girls start thinking about months in advance. They build it up ― with help from movies, TV, fashion magazines and maybe even mom ― as their big red-carpet moment.

Staking an early claim on a dress may help girls breathe easier.

And then it’s the girl who doesn’t follow these new etiquette rules who risks rebuke, Keltner de Valle says.

Of course, she adds, it shouldn’t be that way: Girls should be celebrating who they are at the prom and not make it all about “the dress,” but, for better or worse, that is part of the tradition.

McGowan, a senior, says she has put a lot of thought into her dress and she’s sure she doesn’t want it to be a “typical prom dress.”

“I want to look different than all my friends,” she says, and she thinks she will be in a halter-top, floor-length black dress that she describes as “elegant.”

She shopped for the dress on her own, and asked the salesperson at an independent boutique to direct her to the racks intended for other more sophisticated formal occasions.

Katharine Imrie, a high school senior in Wausau, Wisconsin, is still looking for her dress; she’s thinking purple or red to help her stand out from the crowd.

The prom wardrobe is “the buzz around school right now,” she says. Some of her friends have traveled about two hours away to Madison so they’d be able to pick from more stores offering a wider variety of dresses. “The stores in town here have a lot of the same things,” Imrie says.

The typical girl tries on 30 dresses before making a decision, says Lord & Taylor’s Avitable. It’s not price nor style that ends up driving the purchase, she observes, it’s the confidence that comes with a particular dress.

McGowan says a unique look on prom night will help leave a lasting impression on friends and classmates. “The prom is your last big hurrah of high school,” she said. “You want people to remember you at this moment of you looking your best.”