BALTIMORE ― At first glance, Whitney Morris’ second-floor walk-up resembles most bachelor pads. An office has been converted into a “man cave” filled with a keyboard, a couple of guitars and a computer. The kitchen looks virtually untouched. It isn’t until you walk into his bedroom that you realize Morris has a serious addiction to shoes ― Nike Dunk SBs to be exact.

Morris’ bedroom has turned into a shrine to Nike Dunk SBs. Empty shoe boxes ― they’re needed when he resells a pair ― are stacked to the ceiling in no apparent order. The collection of shoes includes nearly every color and design imaginable, from the cobalt-hued sneakers with a blue-checkered interior (“The Blue Lobster”) to the light pink, yellow and black pair called the “Miss Piggy.” All of them are arranged side by side on a mix of metal shelves, wooden planks and converted bookcases. Tape is used in certain areas to reinforce the weighted-down surfaces.

“I’ve had some friends come in and say: ‘Oh, God!’ Some people think they are cool,” Morris said. “My aunt and uncle came over, and I didn’t take them in my room. I told them that they would be disgusted.”

Morris is just one of a growing number of sneaker fans ― referred to as “sneaker heads” ― with hundreds of pairs of shoes.

Sean Conway has a number of friends who have hundreds of pairs of Nike Dunks, and his own collection is around 500 pairs.

The Annapolis resident has devoted his life to footwear. In fact, his main source of income is buying shoes and reselling them once they have appreciated in value. Conway has so many of the shoes that he converted his second bedroom into a storage room. 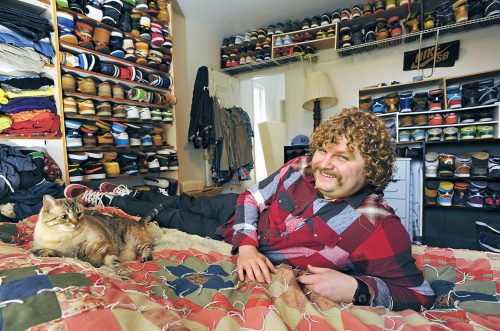 Whitney Morris, 28, keeps his collection of nearly 165 Nike shoes in his bedroom in Baltimore, Maryland. (Baltimore Sun/MCT)
“I love the shoes ― the material, colorways and collaborations,” he said. “Some people think I’m crazy until I show them that there are shoes that sell online for $4,000. I think of it as a collection and an investment. The shoes are always going to be collectibles.”

Morris, Conway and the cult culture of collectors like them buck the stereotype that extensive shoe-collecting is a women’s pastime, according to Vasilios Christofilakos, chairman of the accessories design department at the Fashion Institute of Technology in New York City.

“There aren’t that many of them, but they exist,” Christofilakos said.

“Men who have an obsession with shoes are a totally different animal than the average man,” he said. “The average man will have up to four pairs of shoes in their closet ― a black oxford shoe, a brown shoe and an athletic shoe. They’ll wear them until heels wear off.”

While women tend to go for variety in their shoe collections (picture the heels, boots, sandals, flats and more filling the closets of the notorious Imelda Marcos and the fictitious Carrie Bradshaw from “Sex and the City”), men tend to collect a certain type, according to Christofilakos.

“He’ll be on the pulse on what is coming out and will be at the door waiting,” Christofilakos said.

Conway sees a distinct difference between his sneaker-purchasing habits and a woman buying a new pair of designer peep-toe platforms to go with a new outfit.

“Those shoes those women buy have no story behind them,” he said. “Women buying shoes and shoe collectors are much different. If I was buying Prada, Gucci and Louboutins, that would be one thing, but I’m buying Nikes and Jordans. I don’t think those other shoes have a retail value.”

Men with large shoe collections fall under two categories: the obsessive fashionisto or the athletic footwear beast, according to Christofilakos. Nike Dunk SB collectors are considered the latter.

“They can have hundreds in their closet,” Christofilakos explained. “Will they wear them? Maybe once or twice.”

Morris and Conway acknowledge having shoes that they have never donned.

“My New Year’s resolution was to sell some off that I haven’t worn,” Morris said with a chuckle.

“You don’t want to wear your nicest pair,” said Morris, who has a couple pair of shoes he wears sporadically because of their high price ― he has one pair worth $1,000. “If it is raining or there is a chance of rain, I won’t wear suede. I’ll wear leather.”

With a combination of exclusivity, funky designs and posh materials, Nike Dunk SBs have developed a worldwide cult following. The line was modeled after the Nike Dunk sneakers, which originally launched in the 1980s. Nike Dunk SBs, which attracted a new level of popularity when they debuted in the early 2000s, differed from the original line in that they featured a stuffed sneaker tongue and additional padding along the inside of the shoe, which catered to the wear and tear of skateboarders.

“They’re classic,” Morris said of Nike Dunk SBs. “They always fit really nice, and they feel nice right out of the box. You don’t have to break them in. Plus, you can’t get them everywhere. It’s nice knowing they aren’t as accessible.”

Nike has long been known for having a devoted following. Nike Air Jordans became the first line of sneakers with hundred-dollar price tags, long lines and waiting lists.

Nike Dunk SBs have gone a step further by not only selling a general-release model of sneakers each month, but also an additional “quick strike” model, which is released in more limited numbers. The result has made quick-strike shoes more sought-after and valuable. February’s quick strike, modeled after the Statue of Liberty, features a greenish top layer atop of a bronze color that is revealed when the top layer is scuffed.

Although lucrative, reselling the shoes can be frowned upon by Nike Dunk SB purists.

“I don’t like being looked at as a reseller,” said Conway, who first purchases a pair of shoes for himself before buying additional pairs in sought-after sizes. Stores usually allow customers to purchase one pair of Nike Dunk SBs per transaction. “I like to think of myself as a collector.”

Conway once camped out three days to get his hands on a pair of sneakers, Nike Air Yeezy, which were released in 2009 as a result of a collaboration with rapper Kanye West. Conway pitched a tent and waited at a store in Los Angeles with two friends for the $200 pair of shoes. He said it was worth it because the shoe now has a resale value of up to $1,500.

Conway is traveling this weekend to Washington’s Sneaker Con, a gathering of shoe enthusiasts and vendors, and he plans to bring 150 shoes with him to sell.

“I will feel horrible parting with some of them,” he said. “But I’ll get money to buy new ones. That’s part of the game.”