Driving a motorcycle in Seoul is an enthralling real-life trip into the depths of one’s resolution, courage, patience, motor skills and coordination.

In a country with one of the highest traffic death rates in the world, the challenge becomes a daunting case of one near miss after the other.

Putting all that aside, very few experiences beat driving a motorcycle: the thrill, having the wind blowing through your helmet, the freedom. Some might even say the ease of parking and cheaper fuel cost adds to the experience.

Riding with a group is a completely different dynamic.

The Good Guys and Riders are a group of riders made up of women and men who emphasize safety, love of riding and respect for the road and everyone that shares it. 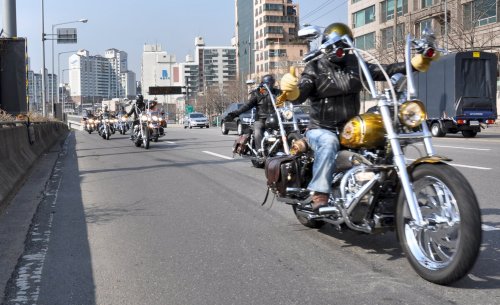 Good Guys on Seobinggo Street after Banpo Bridge on their way to a giant biker rally in the Yongpyong area. (Yoav Cerralbo/The Korea Herald)
“I enjoy going out riding, it’s not about going somewhere all the time, but they pick some great locations to visit,” said Greyhound, a nickname given to him because of his close call with a passenger bus in the United States.

In a world that is often misunderstood, nicknames are king and used like surnames.

Greyhound is a United States military officer at the Yongsan Garrison during the weekdays. His passion, like the rest of GGR, is riding. 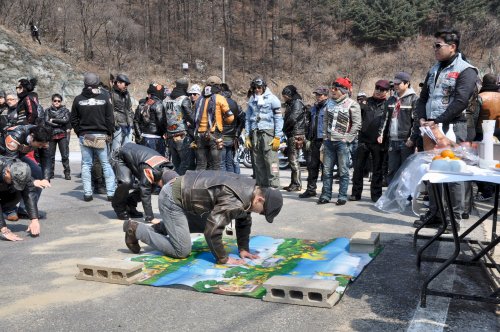 Members of Good Guys and Riders pray for a safe season of riding while members of other clubs gather and wait for their turn.
For Seon-in, his hog is like his child.

Seon-in, which means good guy, works as an oriental doctor during the week, on weekends he dons the leather and rides with the pack.

Before heading off for any day of riding, the group decides who will be road captain (the leader of the pack), who will be second in charge, and just as important, who will be safety manager (the last person that helps members who are in need of a quick pit-stop).

Before heading off, one by one, everyone’s names are matched with a number which corresponds to their place in the pack. 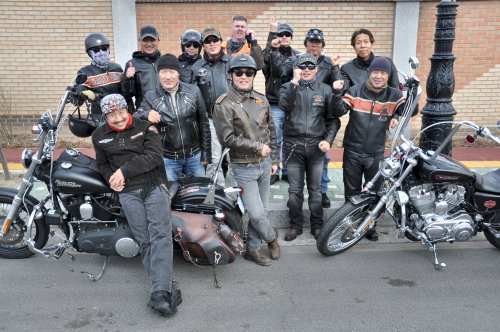 Members of Good Guys and Riders after an afternoon of riding in the countryside. (Yoav Cerralbo/The Korea Herald)
Chris, another rider in the club, said, “I do it every weekend.”

“My wife goes to church on Sundays so she complains that I don’t go to church anymore,” Chris said. “So when I turn on the engine I pray to God asking him for forgiveness and offering gratitude for good health and positive circumstances for riding a bike today.”

He decided to purchase a Harley-Davidson because of the bikes’ aura and mystique.

Before the nation made it big economically and politically, motorcycles like Harleys were a dream for many people.

Today, Korea is a different country and people like Chris and Seon-in are living their dream.

“Everyone that sees our bikes is impressed. People ask me why I ride. There’s not one particular reason,” Chris said.

After reflecting for a moment, Chris adds with a laugh, “There is a little showing-off factor while riding a Harley.”

Communicating with other members is done through hand signals, with the road captain being the first to point out obstacles or dangers ahead which is relayed one by one to everyone behind.

If there is a pothole, a leg sticks out to show its immediate location, if a turn is coming, a hand signal points in the direction of the turn.

The club does not ride with those who like to drink alcohol and drive recklessly. Instead, they prefer riding with people who put safety ahead of everything.

The camaraderie of knowing that the rider in front or behind is looking out for everyone’s safety is an experience not often experienced outside of a team sport.

There are countless biker clubs in Korea that cater to anyone’s fancy.

Generally, biker clubs have likeminded individuals, be it their mentality or chosen manufacturer.

There are scooter clubs, speedster clubs and clubs that are specific to that rider’s model like Honda Goldwing clubs, Arlen Ness clubs, Kawasaki clubs and so on.

A couple of weeks ago, GGR made their annual ride to Yumyeong Mountain in the Yongpyeong area to experience the giwongjae ― a ritual ceremony during which riders pray for a safe year ahead.

“It’s a ceremony they’ve always done and gives a chance for all the clubs to get together and catch-up,” said Greyhound.

Dozens of clubs with hundreds of riders decked out in protective leather, riding some of the most beautiful and outlandish Harleys partook in the ceremony where they bowed in front of a table filled with fruit, makgeolli and a pig’s head, offering alms for a safe ride ahead.

The ride within Seoul was surprisingly easy and fun. One after another, GGR surprised drivers with motorcycles that cost as much, if not more, than most cars on the road.

Hog after hog put a smile on the dreariest of taxi drivers’ faces, school-aged boys would point and wave, startled women would offer a gentle smile, fathers in minivans would look with envy as one of the classiest bikes rolled by. Yet whatever the response, everyone knew that rolling thunder was near.

“That loud noise protects you in a way because car drivers always look to see where the sound is coming from,” said Chris.

Once outside the city the experienced change into one of complete freedom. The fresh air engulfed the easy rider while the majesty of the scenic backdrop brought out a heightened sensation of appreciation for this country.

But despite all the safety emphasis, one of the members slipped on the icy hills of Yongpyeong. The rider, Alex, who is also the Serbian ambassador’s chauffeur, was not seriously hurt and suffered only a fractured right arm.

“That won’t stop me. I will be back riding in the weeks to come,” he said just three short hours after his fall.

Because of the dangerous meandering road conditions, Yumyeong Mountain is recommended for expert riders, explained Greyhound, and should only be experienced once a rider has had several thousand miles under their belt.

Yet, even with all the experience and safety awareness instilled in a rider, accidents do happen. Every rider will go through at least one accident in their lifetime of riding. Moreover, a driver is not considered a rider unless they have had a hair-raising experience on the roads.

Once alms were paid and respects offered to the gods of riding, it was time to hop back on the hogs to enjoy a ride through the Korean countryside.

Unfortunately, just as GGR were saddling up, another rider from another club lost control of his Fat Boy and fell to the ground. No one laughed; instead a few riders came running to the rescue. Some helped to put the 330-kilogram behemoth back on its wheels while others stood in the middle of the road to direct traffic.

That day, four riders were hurt driving on one of the country’s most treacherous roads.

Greyhound, who has lived in Korea for nine years, speaks perfect Korean. Besides enjoying his time with GGR, he takes advantage of the rides to map out new routes for the Road Dragons.

The Road Dragons welcome anyone who rides or is thinking about riding in Korea. The prerequisite is that a would-be member must be willing to have fun, meet new friends and enjoy the ride. Motorcycles can be any make or model but should be over 600 cc, for safety reasons.

The club is made up of United States Department of Defense personnel, expats and Koreans.

There are two big biker rallies in Korea. The first is the Giwangjae, the second is the even bigger Seocho rally organized by Harley-Davidson Korea where thousands of motorcycles head out to the eastern coast for 3-4 days of fun.

“It is not about being crazy, it’s about having a good time together,” said Greyhound.

There is talk among the clubs and Harley-Davidson Korea to transform the Seocho rally into a huge festival where bikers from Asia would convene.

The idea came from the giant biker rally in Sturgis, South Dakota, where over 700,000 riders from all over the world gather and celebrate life on two wheels.

As for biker clubs like the Hells Angels and the Rock Machine, that is a big no-no. Clubs in Korea differentiate themselves from their Western 1-percent brethren of the road.

Occasionally, Hells Angels members from Europe attempt to cause trouble in Seoul by picking on U.S. military personnel or local biker rallies.

If hooligans like these appear, the police are quickly informed and the perpetrators are kicked out of the country and blacklisted by Immigration.

After a fun-filled day of sightseeing and camaraderie on two-wheels, the group stopped just inside Seoul to pay their farewells, discuss the last part of their journey and plan their next ride the following week.