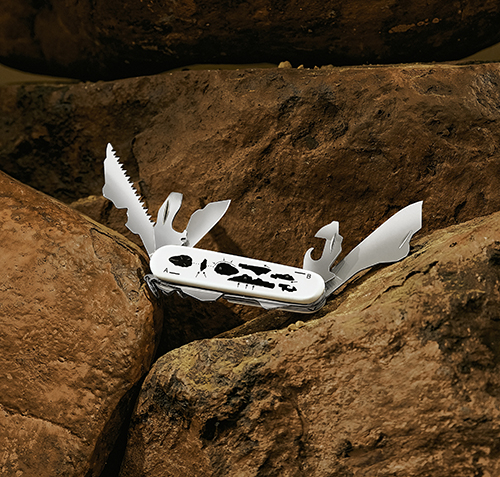 The limited edition Swiss Army knife is a flagship product of “Equipment,” a special lineup showcased by Off-White in collaboration with South Korean men’s fashion brand Post Archive Faction. The Italian firm had welcomed Victorinox to collaborate on the knife as part of the project.

The tool’s design is based on Off-White's founder and designer Virgil Abloh’s last design project, called “Adam and Eve, Androgyny, The Beginning.” It is a posthumous work of the world-renowned designer who passed away in 2021, according to the knife maker.

The limited edition product’s exterior is made of white artificial marble with black printings of the tools it includes. Its major theme is “new beginnings” with its blades being shaped like ancient stone tools used by prehistoric humans, and forming the shape of a fig leaf when each tool is placed in the correct order, explained Victorinox. The fig leaf is an allusion to Adam and Eve who, according to the Bible, wore the leaves to cover their nudity after obtaining knowledge of good and evil.

There are only 3,000 pieces of the collaborative product worldwide, with each piece having its own sequential number. The product took two years to develop, according to the Swiss company.

The knife is available for sale at local Victorinox stores across South Korea.