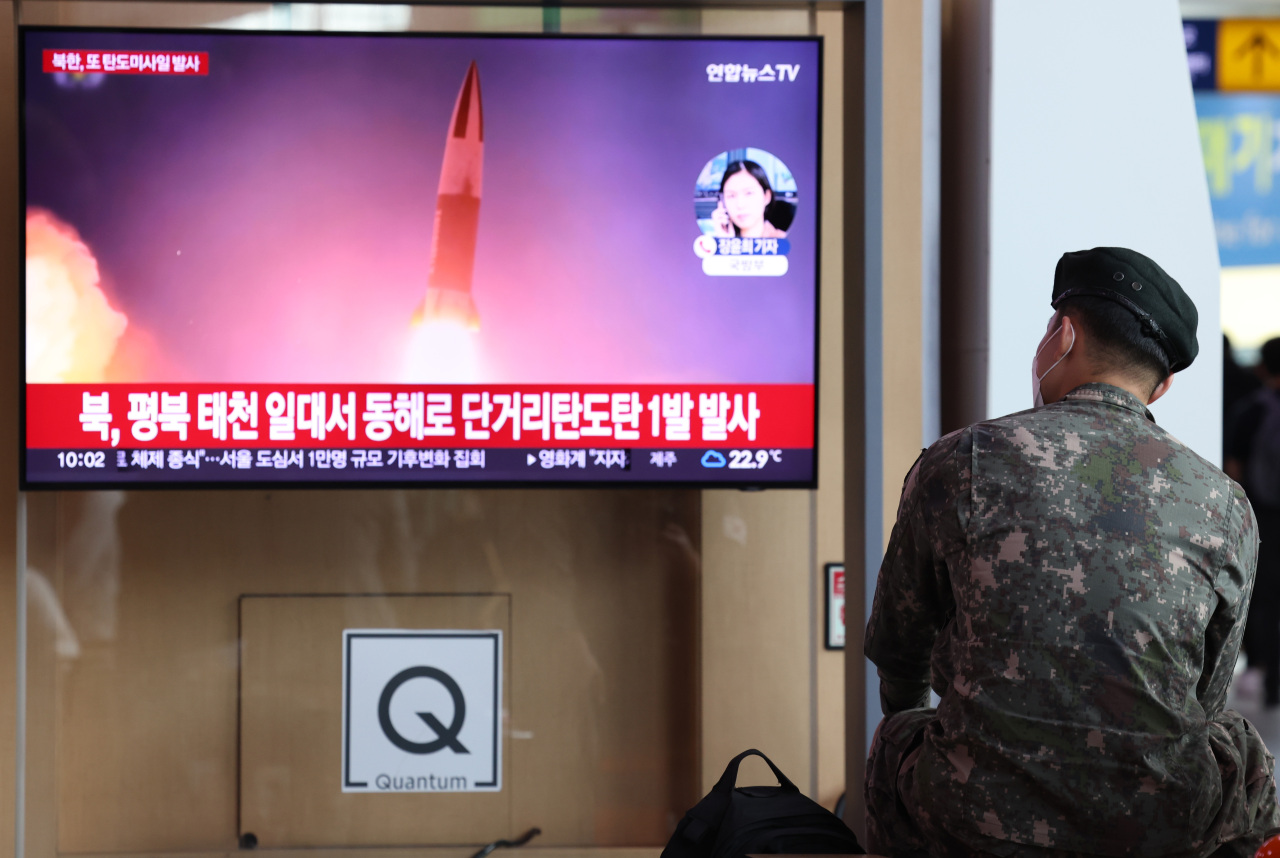 A man watches a television news report on North Korea's firing of suspected artillery shots, at Seoul Station in the capital city on Sunday. (Yonhap)
North Korea fired one short-range ballistic missile into the East Sea on Sunday, two days after a US Navy’s nuclear-powered aircraft carrier arrived here for a joint exercise.

South Korea’s Joint Chiefs of Staff said Sunday that Pyongyang fired a short-range ballistic missile from Taechon in North Pyongan Province at 06:53 a.m. The missile traveled about 600 kilometers and reached a maximum altitude of 60 km, the JCS confirmed.

The launch of the ballistic missile comes in an apparent show of force against the arrival of the US Navy’s nuclear-powered aircraft carrier USS Ronald Reagan here.

The aircraft carrier entered South Korea for the first time in five years, for a four-day combined military exercise with the Korean Navy planned from Monday, aimed at improving combat readiness and deterrence against increasing military threats from Pyongyang.

It is also the first missile the North has launched after its rubber-stamp parliament announced a new law to define the state as a nuclear weapons power earlier this month.

"The participants (of the NSC meeting) identified North Korea's missile launch as one that clearly violates UN Security Council resolutions, and condemned the act as a provocation raising tension on the Korean Peninsula and the region. They also made clear that it cannot be justified for any reason,” the presidential office said in a statement.

The NSC meeting, which was convened by national security officer Kim Sung-han, immediately reported the missile launch after the military detected it, the presidential office said.

“The participants also recognized it is the first launch of a ballistic missile since North Korea introduced a new nuclear law officially declaring its preemptive use of tactical nuclear weapons on Sept. 8. They agreed to take active measures maintaining close cooperation with the US and other friendly nations."

Observers view Sunday's missile launch as an apparent protest against the deployment of the US strategic asset in the region.

The USS Ronald Reagan Carrier Strike Group will conduct combined maritime exercises in the East Sea, where the North fired its ballistic missile. The USS Ronald Reagan is a 100,000-ton nuclear-powered supercarrier with a total of around 4,900 crew members and 90 aircraft.

The Korean military had said that Pyongyang may be preparing to fire a submarine-launched ballistic missile.