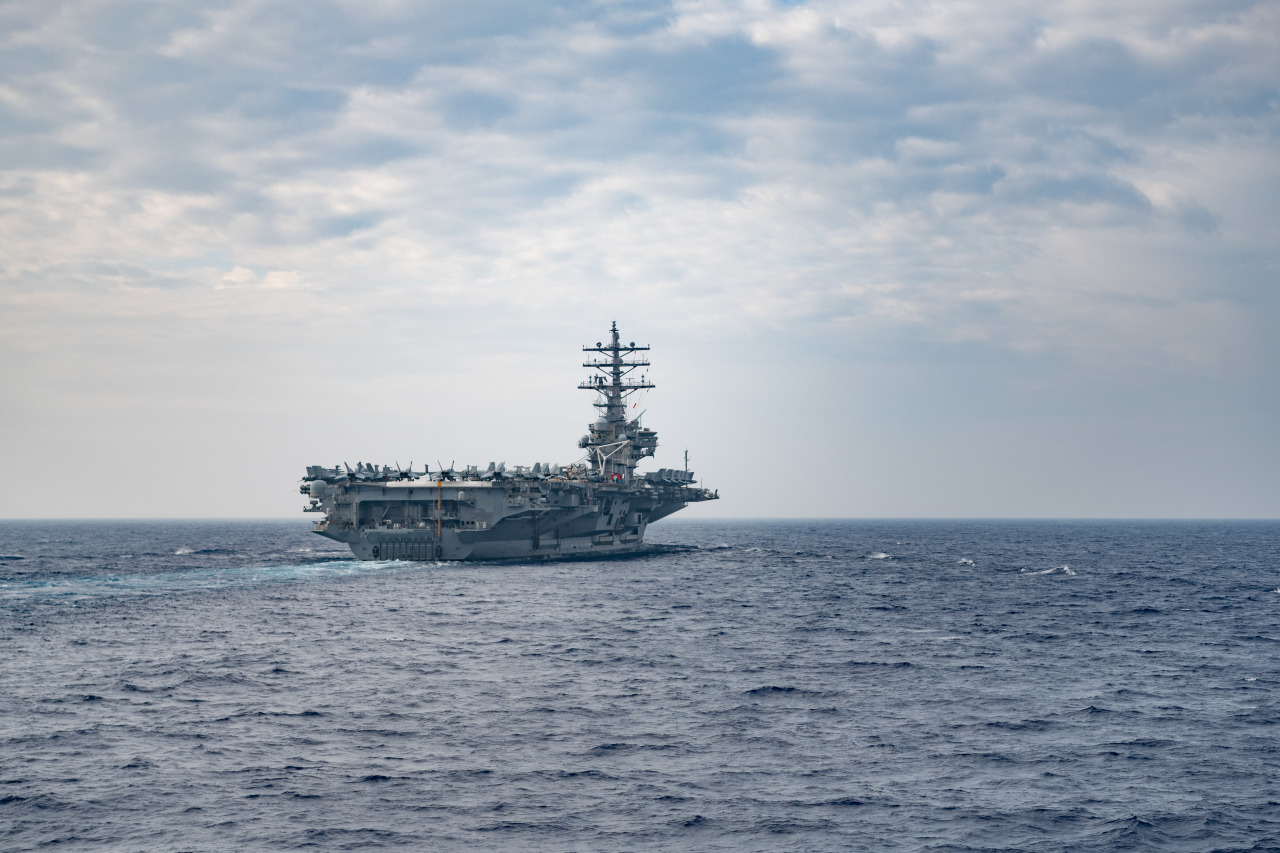 The Nimitz class aircraft carrier USS Ronald Reagan (CVN 76) conducts routine operations in the Philippine Sea in May 2020. Ronald Reagan is forward-deployed to the U.S. 7th Fleet area of operations in support of security and stability in the Indo-Pacific region. (File Photo - US Navy)
A US nuclear-powered aircraft carrier will stage military exercises with South Korean warships in South Korean waters later in the month for the first time since 2017 to strengthen the alliance’s readiness and deterrence against North Korea, South Korea’s Navy announced on Monday.

The US Navy’s USS Ronald Reagan, a 100,000-metric ton nuclear-powered supercarrier, and its strike group will arrive at a naval base in the southern city of Busan on Friday morning.

The port visit by the US carrier strike group aims to “strengthen friendship and cooperation between the South Korean and US Navies and participate in combined maritime exercises,” according to the South Korean Navy.

The last time a US nuclear-powered aircraft carrier visited South Korea was in October 2018, when the USS Ronald Reagan participated in the South Korean Navy’s international fleet review held off the southern island of Jeju.

But the upcoming visit will mark the first time in five years that a US carrier strike group will enter Busan Naval Base. The Ronald Reagan Carrier Strike Group visited the base in October 2017 and participated in the bilateral Maritime Counter Special Operations exercise.

“The navies of the two countries will conduct combined maritime exercises in the East Sea to strengthen the military readiness posture and demonstrate the ironclad will of the South Korea-US alliance to maintain peace and stability on the Korean Peninsula,” the South Korean Navy said, without further details.

The naval exercises will be reportedly staged at the end of this month, although the exact date and scale of the exercises have yet to be announced.

South Korea’s Navy on Monday underscored that the forthcoming deployment of the Ronald Reagan Carrier Strike Group on the Korean Peninsula is a follow-up measure to an agreement made between South Korean President Yoon Suk-yeol and US President Joe Biden at the May 21 summit.

Yoon and Biden reaffirmed the US’ commitment to “deploy strategic US military assets in a timely and coordinated manner as necessary, as well as to enhance such measures and identify new or additional steps to reinforce deterrence in the face of DPRK destabilizing activities” in their joint statement.

In July, the South Korean and US defense chiefs also committed to “strengthen the alliance’s deterrence posture,” pointing the deployment of the US strategic assets on the Korean Peninsula as the key means to achieve this goal.

The upcoming deployment of the USS Ronald Reagan is the next step, after the US dispatched its nuclear-powered aircraft carriers in international waters off the east coast of South Korea this year in an apparent show of force against North Korea.

A nuclear-powered aircraft carrier and submarine, as well as a nuclear-capable bomber are among the US’ strategic assets which are strategically positioned as a show of force to deter provocations by potential adversaries.

The deployment of the US’ strategic assets comes after South Korea and the US held a meeting of the Extended Deterrence Strategy and Consultation Group between the vice ministers of foreign affairs and defense on Sept. 16 in Washington for the first time since January 2018.

The US notably committed to strengthen coordination with South Korea to “continue to deploy and exercise strategic assets in the region in a timely and effective manner” to counter and deter North Korea and enhance regional security in the allies’ joint statement on the outcome of the EDSCG meeting.

The two countries highlighted the upcoming deployment of the Ronald Reagan Carrier Strike Group on the Korean Peninsula as a “clear demonstration of such US commitment” in the joint statement.