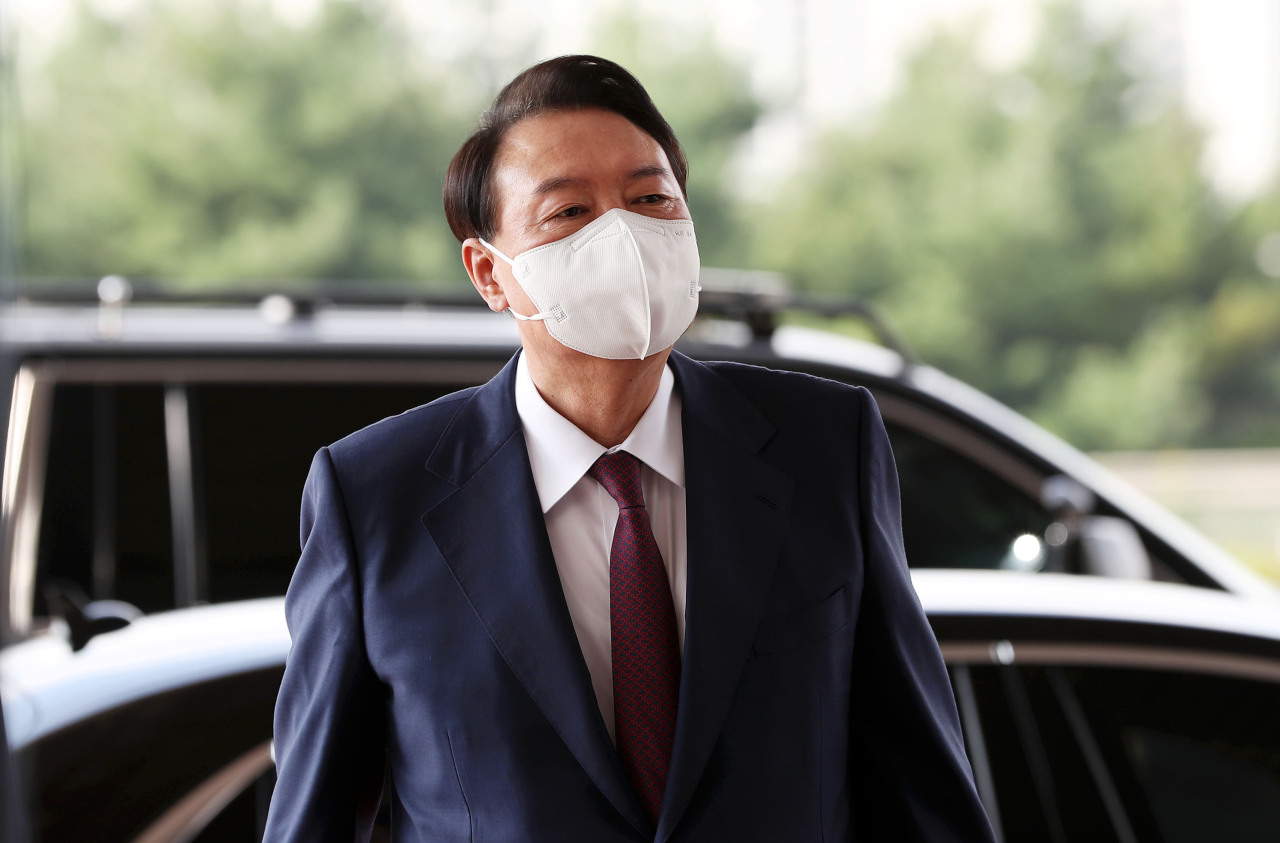 President Yoon Suk-yeol arrives at the presidential office in Yongsan, central Seoul, on Wednesday. (Yonhap)
In President Yoon Suk-yeol’s address marking his 100 days in office on Wednesday, COVID-19 went noticeably unmentioned despite the worrying rise in cases. Yoon has yet to appoint his minister of health and welfare, after the last two nominees dropped out following allegations of corruption.

As president-elect and as candidate, Yoon has said he would be better than his predecessor Moon Jae-in at handling COVID-19. But the steps taken by his administration so far have more or less been followed what has previously been done.

For one thing, the post-omicron scheme of minimal restrictions and continuing normal life, devised and adopted by the preceding administration, is being upheld. The new administration has not revived any of the policies that are no longer in place, such as contact tracing and free testing, despite having criticized their termination as “unscientific” during the campaign.

The majority of the COVID-19 milestones that were slated to be met over Yoon’s first 100 days in office remain unfulfilled.

Most notably, the presidential transition committee’s COVID-19 response team had said that before the 100 days are up, there would be more frequent antibody surveillance on larger populations, improved ventilation systems at high-risk places and a nationwide long COVID-19 database. None of these have met the deadline.

As omicron’s BA.5 subvariant took over as the dominant strain, South Korea has been recording its highest daily case counts in months, with the figure reaching 178,574 on Thursday. Health officials argue that although the country has one of the highest incidence of infections worldwide, its case fatality rates are one of the lowest at around 0.12 percent.

South Korea is relying largely on pharmaceutical interventions to respond to the pandemic, with the only remaining COVID-19-related rules being the indoor mask mandate and seven-day isolation requirement for confirmed patients.

But as the vaccines and treatments are imperfect, experts suggest having nonpharmaceutical interventions to complement where they fall short.

After their eligibility opened up in April, 41 percent of people in their 60s have received fourth doses or “second boosters” to date.

The fourth doses being distributed now are of vaccines based on the original strain found in Wuhan, China. Since then the virus has evolved to several variants to get to omicron BA.5 that is currently dominant.

The Korea Disease Control and Prevention Agency still recommends fourth doses to people in their 50s and older if they have not been infected.

Based on the KDCA study of 1.5 million nursing home residents, between February and April when BA.1 and BA.2 were mainly circulating, fourth doses were 50.3 percent effective in preventing severe outcomes compared to patients who got only three shots.

The variant-adapted vaccines under review for approval here are the Wuhan and BA.1 bivalent. Ones targeting the latest BA.4 and BA.5 are still in the making.

Easily accessible and administrable treatments have yet to come by.

Oral antivirals Paxlovid and Lagevrio have been slow to roll out, with only about 18 percent of eligible patients in their 60s and older having gotten them so far. The use of Evusheld is even more limited, prescribed only to immunocompromised people who are less protected by vaccines. After antibody drugs, no longer effective against omicron, were taken off the shelves, the remaining options are remdesivir and dexamethasone.