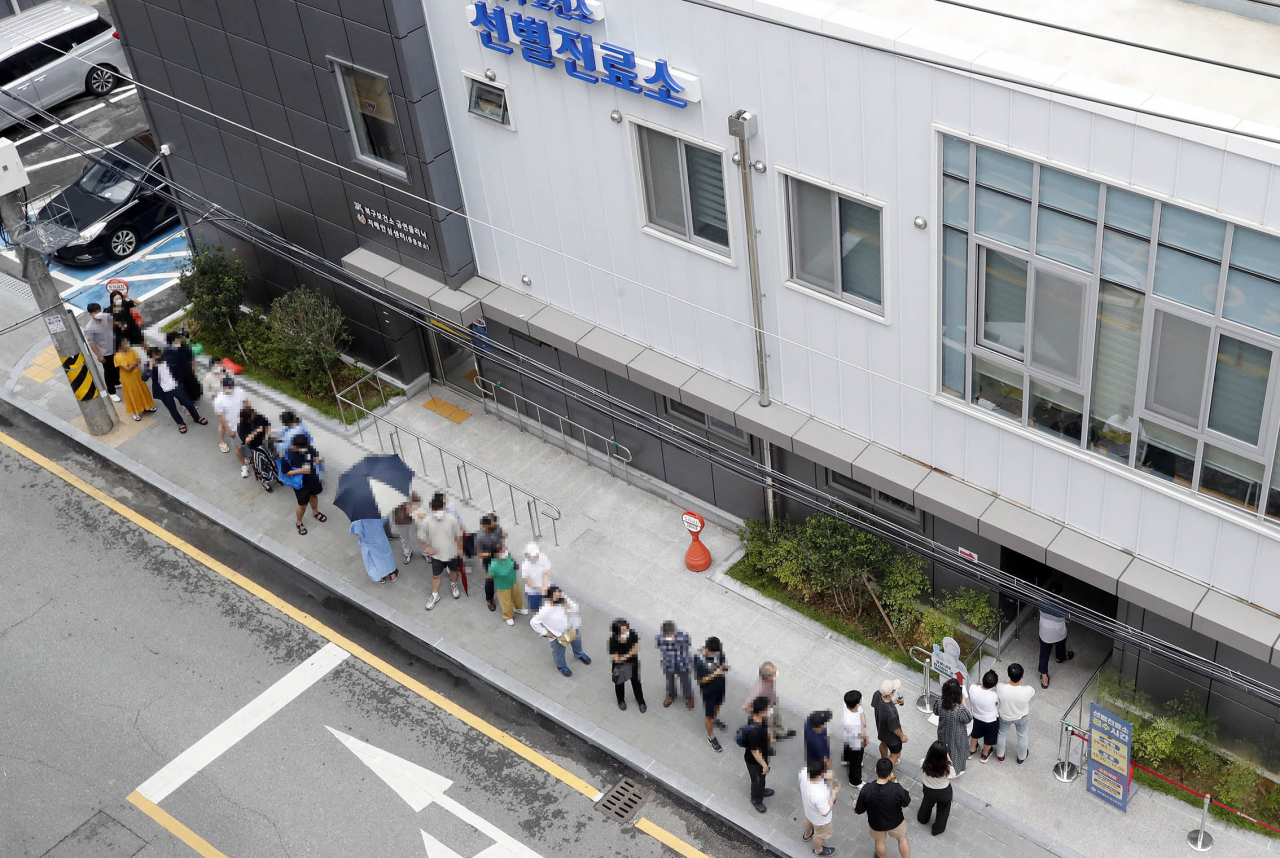 This photo, provided by a ward office in the southwestern city of Gwangju, shows people waiting to undergo COVID-19 tests in the city on Tuesday. (Gwangju ward office)

South Korea's new COVID-19 cases jumped to a four-month high on Wednesday following the extended weekend amid the continued spread of a highly contagious omicron subvariant.

The country added 180,803 new COVID-19 infections, including 567 cases from overseas, bringing the total caseload to 21,682,816, according to the Korea Disease Control and Prevention Agency (KDCA).

It is the highest figure since April 13, when the daily tally came to 195,387 amid the worst virus wave.

Wednesday's figure also more than doubled from the previous day's 84,128 cases. It is also about 20 percent larger than the 151,792 infections logged a week earlier.

"An increase in travelers in the summer vacation season and the recent extended Liberation Day holiday are expected to have an impact (on infection tallies) this week," Kim Sung-ho, the head of the interior ministry's disaster management office, said during a government COVID-19 response meeting.

New daily infections had hovered below the 100,000 level on Monday and Tuesday for the first time in a week due mainly to fewer tests over the extended weekend that included the Aug. 15 Liberation Day.

On Wednesday, the country also reported 42 more COVID-19 deaths, bringing the total to 25,752, the KDCA said. The fatality rate stood at 0.12 percent.

The number of critically ill patients came to 469, down from the previous day's 563 cases, according to the KDCA.

The number of imported cases has also risen markedly recently. Wednesday's figure is the fifth largest daily tally ever, the KDCA said.

South Korea has seen another virus wave since July driven by the fast spread of the omicron subvariant BA.5 and the government's lifting of virus curbs.

BA.5 accounted for 87.9 percent of total infections last week, up 11.6 percentage points from a week earlier, the KDCA said. It became the dominant variant in South Korea in the fourth week of July.

The KDC has said that new infections are expected to peak at around 200,000 this month before shrinking at a slower pace, though the situation could change in line with potential impacts of the summer vacation season, weather conditions, and other factors.

The number of critical cases could also surge to over 900 early next month, and the daily death toll could reach as high as 140, the health authorities said.

In March, the authorities began administering Lagevrio for patients with underlying illnesses or symptoms that prevented them from taking Pfizer's Paxlovid or other treatment pills, and some 40,000 doses have been administered so far. (Yonhap)