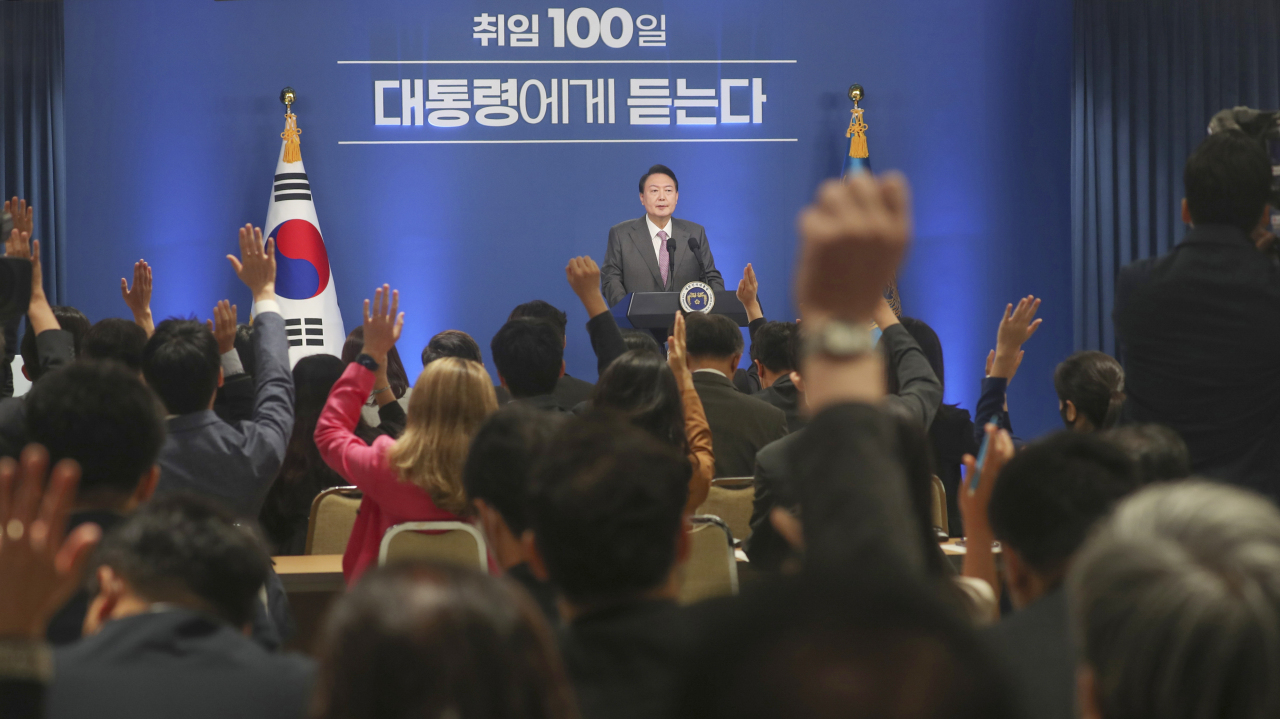 Reporters raise their hands to ask questions at the 100-day press conference held at the presidential office building in Yongsan, Seoul, Wednesday. (Yonhap)
President Yoon Suk-yeol said Wednesday that the South Korean government does not back the use of force in bringing about changes in North Korea, but that guaranteeing regime security is not an element of his “audacious initiative.”

Yoon also said that he sees dialogue with the North as “necessary,” but it should not be political showmanship.

“Guaranteeing regime security is not something the South Korean government can do,” Yoon said in a press conference marking his 100th day in office. He was responding to a question as to whether the South Korean government can guarantee security if Pyongyang asks in the process of implementing the “audacious initiative,” a policy he proposed to the North.

“Neither I nor our government wants to change the status quo by any force in North Korea,” he said. “The most important thing is establishing sustainable peace between the two Koreas, and we welcome the change if North Korea changes naturally due to our various economic and diplomatic support to North Korea.”

The audacious initiative is a plan for the North that includes a range of political and economic support measures if North Korea stops developing nuclear weapons. Yoon announced the plan Monday in his Liberation Day speech.

“Dialogue with North Korea is necessary,” he said. “However, dialogue between the leaders of the two Koreas or dialogue and negotiations between key working-level officials should not be a political show, but should be beneficial for the actual peace settlement of Northeast Asia on the Korean Peninsula.”

When asked whether South Korea should possess nuclear weapons to maintain the balance of power if the North does not denuclearize, Yoon said he believes the Treaty on the Nonproliferation of Nuclear Weapons, or NPT, is “very important” and an “essential prerequisite” for lasting world peace.

“No matter the circumstances, we plan to consider making extended deterrence more effective and strengthening as a priority task,” he said.

When asked by a Japanese reporter how he would handle controversial forced labor issues amid the complicated relationship with the neighboring country, Yoon said the Korean government is looking for ways for the victims to receive compensation without raising sovereignty issues.

In 2018, the Korean Supreme Court ruled that Japanese war criminal companies should compensate Korean victims of forced labor, but the companies did not follow the rulings. Since then, the victims have filed additional applications for selling their assets to compensate, and now only the Supreme Court ruling remains. The ruling will take place Friday.

“Past issues can be resolved more smoothly and quickly through concessions and understanding when the two countries strengthen future-oriented cooperative relations,” he said.

Yoon thinks the government and the people can “come up with a reasonable plan” for the two countries’ past issues considering security in East Asia and economic security in the future.

When asked whether South Korea intends to support offensive weapons to Ukraine, he refused to answer in detail.

But Yoon said it is “difficult to talk about” whether to provide offensive weapons or military support on the day.

“We will do our best to help the Ukrainian people restore their freedom and restore their damaged national assets as soon as possible.”

As for his symbolic but at times controversial in-office morning interviews, Yoon said he would carry on with them.

“I think the process of carrying out the presidency should be transparent to the people, and sharp and various criticisms should be received from the people,” he said.

Last week, former Deputy Prime Minister and Education Minister Park Soon-ae stepped down after 34 days in office to take responsibility for the confusion of the “5-year-old school” entry age policy. Education Secretary Kwon Sung-yeon was also replaced in related to the controversial policies.

Regarding personnel appointments dragging down his ratings and speculation of a reshuffle, Yoon said he would not change personnel for a ratings rebound.

“I think a personnel reshuffle should be done very carefully to support the people’s livelihoods, and it should not be done for the political purpose of changing the political situation or rebounding the approval rating,” he said. “I think it will take some time.”

He added, “We have already started (reviewing), but we are looking at where the problem has been.”