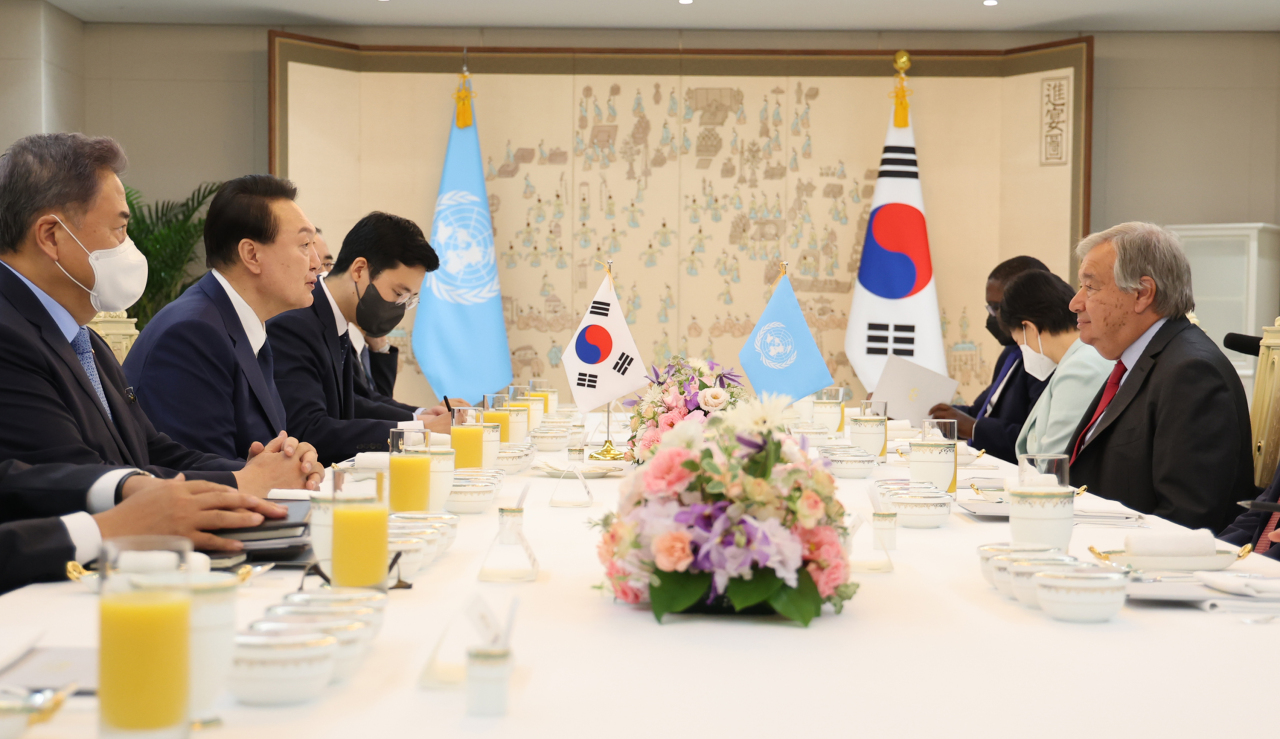 South Korean President Yoon Suk-yeol (2nd from L) holds talks with UN Secretary-General Antonio Guterres (1st from R) over lunch at the presidential office in Seoul Friday. (Yonhap)
The South Korean President and the UN chief had a “candid” discussion on the North Korean nuclear issue and shared their view that the country’s development of missile and nuclear weapons posed a “major challenge” to regional and world peace.

South Korean President Yoon Suk-yeol and UN Secretary-General Antonio Guterres had a luncheon meeting that lasted for 2 hours and 20 minutes on Friday in Seoul, the South Korean presidential office said.

Both sides discussed the North Korean nuclear issue and other major global issues, including the regional situation, climate change and the Sustainable Development Goals, during the in-person meeting at the presidential office in Yongsan, central Seoul.

Candid discussion on N. Korea
Yoon and Guterres “exchanged candid views on the history and controversial points of the North Korean nuclear issue,” the South Korean presidential office said in a press statement.

The two leaders “shared their view that the advancement of North Korea’s nuclear and missile programs pose a major challenge to the Nuclear Non-Proliferation Treaty (NPT) system as well as peace in Northeast Asia and in the world.”

“Secretary-General Guterres expressed his view on the situation in North Korea based on his visit to North Korea in 1999 and said that he would continue to support our government’s efforts to resolve the North Korean nuclear issue,” according to the presidential office.

During the meeting, Yoon also discussed concrete ways to advance cooperation between South Korea and the UN with other senior UN officials in charge of development, peace building and climate change.

Guterres was accompanied by UN Undersecretary-General and High Representative for Disarmament Affairs Izumi Nakamitsu, Assistant Secretary-General for Europe, Central Asia and the Americas Miroslav Jenca, and Special Adviser to the Secretary-General on Climate Action Selwin Hart, among others.

Ganbold Baasanjav, head of the East and North-East Asia Office at the UN Economic and Social Commission for Asia and the Pacific, also attended the meeting.

Yoon also said his government would fulfill its responsibilities and role worthy of its global status in the fields of climate change, international development cooperation, peacebuilding and human rights.

The South Korean president explained that the government “values solidarity and cooperation to maintain international order based on universal values and norms.”

In return, Guterres said he looks forward that the South Korean government and the UN will strengthen cooperation in the areas of international peace and security, human rights, development and climate change.

Against that backdrop, Guterres asked Yoon to attend the UN General Assembly in New York in the middle of next month.

“I thank President Yoon Suk-yeol for his kind invitation and the rich discussions on non-proliferation, the denuclearization of the Korean Peninsula & climate action,” the UN chief said Friday on his official Twitter. “The Republic of Korea‘s strong commitments are a solid contribution to peace among nations & peace with nature.” 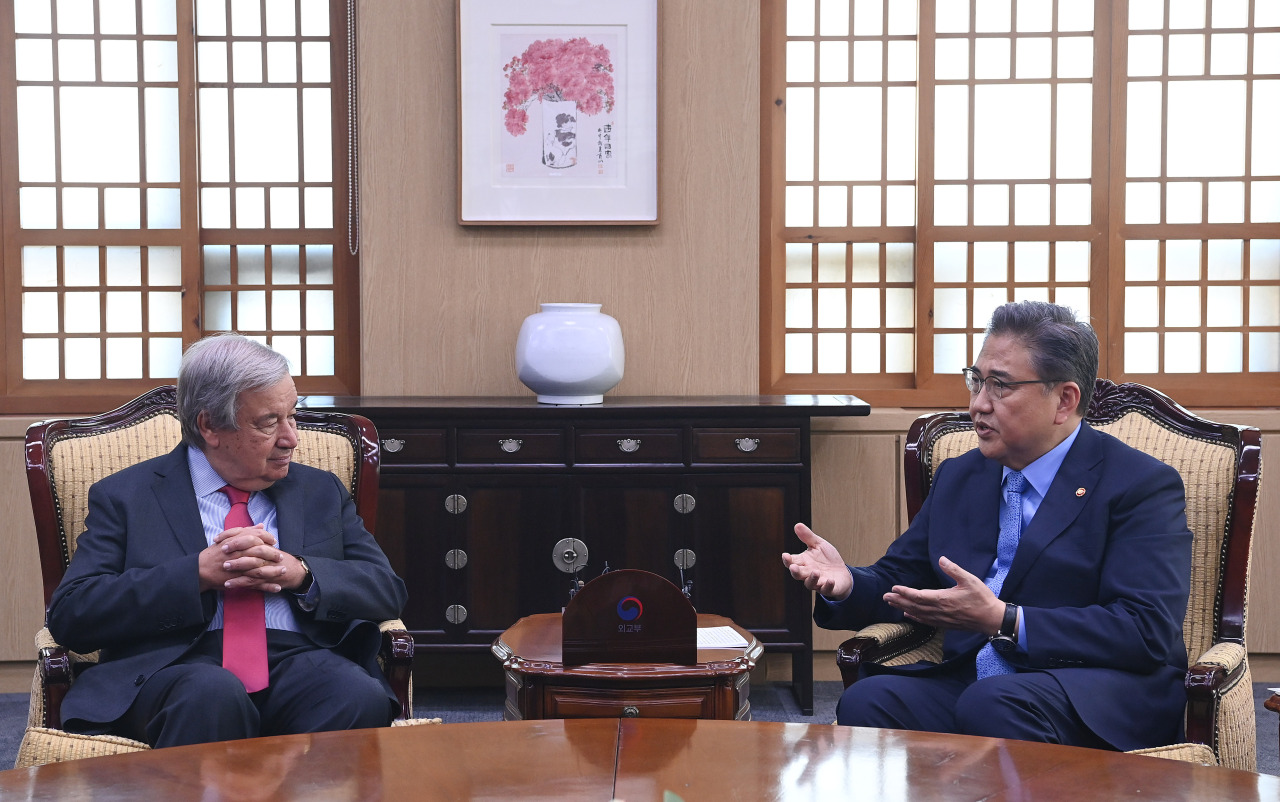 Park and Guterres discussed the situation on the Korean Peninsula and in the region, global issues such as the war in Ukraine and the upcoming 77th UN General Assembly, South Korea’s Foreign Ministry said.

During the meeting, Park pointed out that the “international community including the UN need to be united and send a clear message that they do not tolerate North Korea’s nuclear development.” The South Korean foreign minister also called for the UN to “provide continuous support to come up with effective countermeasures against the North Korea nuclear issue.”

In response, Guterres reaffirmed his support for the Yoon Suk-yeol government’s efforts to establish sustainable peace on the Korean Peninsula, according to South Korea’s Foreign Ministry.

“Everything that can be done to launch a process of dialogue aiming at denuclearization … will be very much welcome and you will have the full support of the United Nations,” Guterres said in his opening remark.

In his remark, the UN chief underlined that he was very impressed with South Korea’s strong commitment to “do everything for full, verifiable and irreversible denuclearization of the Korean Peninsula.”

During the meeting, Park also said the government seeks to strengthen its partnership and cooperation with the UN as the country moves forward toward the “global pivotal state.”

Park said the South Korean government intends to “play a more proactive role in defending the fundamental values of the UN Charter as a global pivotal state which contributes to freedom, peace and prosperity,” according to Foreign Ministry.

South Korea is currently a member of the UN Economic and Social Council and Human Rights Council. The country plans to bid for its third non-permanent membership of the United Nations Security Council for the 2024-25 period.

In response,Guterres called for the South Korean government to continue to contribute to protecting and developing multilateralism, underscoring the importance of international cooperation in the areas of climate change, humanitarian aid, international peace and security and others, according to the Foreign Ministry.

The UN chief arrived in South Korea on Thursday afternoon for a two-day trip on the third leg of his tour to three Asian countries including Japan and Mongolia. Guterres’ visit to South Korea marks the first time in four years since the 2018 PyeongChang Winter Olympics.