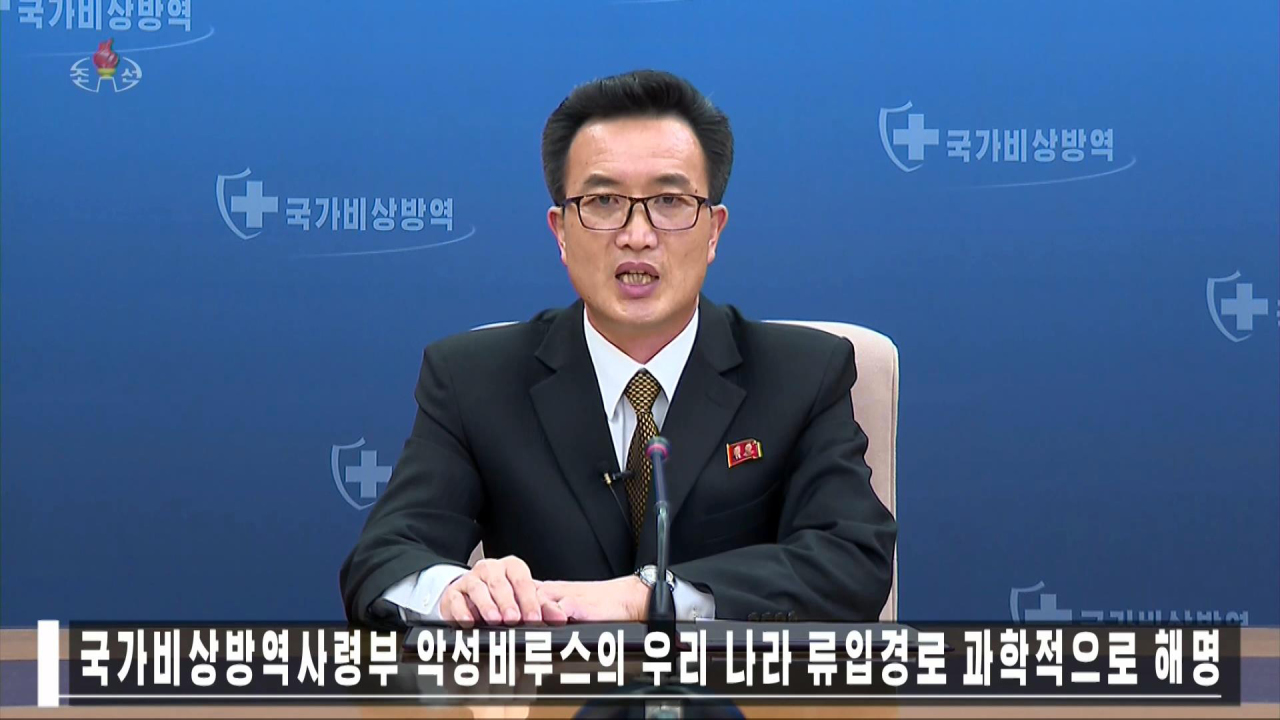 A briefing by Ryu Yong Chol, an official with the state emergency epidemic prevention headquarters, is aired by the state-run Korean Central Television. (Yonhap)
North Korea has claimed that a COVID-19 outbreak began from people touching “alien things” in an area near the eastern Inter-Korean border, which experts view as a potential move to shift the blame to South Korea and set the tone for launching an offensive campaign.

The North’s State Emergency Epidemic Prevention Headquarters on Thursday announced the outcomes of its investigation on the origin and inflow of COVID-19, which began to rapidly spread across the country in late April, North Korean internal and external-oriented state media outlets reported Friday.

The results came 1 1/2 months after North Korea on May 12 officially admitted to the presence there of the BA.2 subvariant of omicron for the first time and dropped its zero-COVID policy.

According to the results, COVID-19 first emerged in Ipho-ri of Kumgang County of Kangwon Province, which is located near the eastern Inter-Korean border.

In mid-April, several people who came up to the capital city of Pyongyang from Ipho-ri began to show fever symptoms for the first time in North Korea, which led to a rapid increase in the number of fever patients across the country.

The North Korean state media said they “contacted alien things in a hill in the vicinity of barracks and residential quarters in Ipho-ri in early April,” without sharing further details.

“They showed the clinical features, which were regarded as early symptoms of a malicious viral infection, and they tested positive for the novel coronavirus.”

The report did not specify what the “alien things” referred to but suggested the virus originated from anti-North Korean propaganda leaflets and other items that South Korean civic groups sent across the inter-Korean border via balloons.

Against that backdrop, the State Emergency Epidemic Prevention Headquarters has issued “emergency instructions” as North Korea confirmed the pathway of the virus inflow.

The directions emphasized the necessity to “vigilantly deal with alien things that fly into the areas along the demarcation line and borders due to weather conditions including wind and via balloons.”

The agency has also ordered to “thoroughly trace the origin” of the items carried by balloons, “strengthen the all-people supervision and reporting system, in which anyone should report alien things immediately after discovering them, and tighten anti-epidemic measures” such as the emergency anti-epidemic teams’ duty to collect and remove the items.

North Korean state media also said the investigation committee “shared the view on the cause of the malicious virus infection.”

North Korean authorities also analyzed the reasons for the simultaneous spread of COVID-19 that flew into Ipho-ri, the state media said, without further elaboration.

Meanwhile, South Korea’s Unification Ministry on Friday refuted the North Korean claim, given that spreading COVID-19 through contaminated surfaces is “practically impossible.” The ministry reported that the South Korean civic group that sent the balloons in question said it distributed the anti-North Korea leaflets on April 25 and 26.

“The government does not see the possibility of the coronavirus flowing into North Korea from South Korea,” the Unification Ministry’s deputy spokesperson Cha Deok-cheol said in a regular briefing.

Steps to clamp down on anti-North leaflets
Cheong Seong-chang, director of the Center for North Korean Studies at the Sejong Institute, viewed that North Korea will use the occasion to step up efforts to crack down on balloon-lifted anti-North Korea leaflets spread in the border areas.

The regime will also ramp up punishment on those who come across propaganda leaflets to minimize the impact of the psychological warfare against North Korea.

“Although North Korea did not make any explicit mention, the announcement intends to make North Korean people believe that COVID-19 flew into North Korea through dollars and items accompanied with anti-North Korea leaflets that were sent by defector groups in South Korea,” Cheong said.

“North Korea is expected to respond very sternly to the distribution of anti-North Korea leaflets by defectors groups given that North Korea practically shifts responsibility for the COVID-19 inflow to South Korea.”

Shifting blame, setting the tone
Seoul-based experts have viewed that North Korea is seeking to shift the blame for the outbreak and spread of COVID-19 to South Korea for political ends and to reinforce the Kim Jong-un regime’s leadership.

Hong Min, director of the North Korean Research Division at the government-funded Korea Institute for National Unification, said this is how North Korean authorities can capitalize on the COVID-19 outbreak and the division of the two Koreas to manage the situation of its health crisis and reinforce Kim’s leadership.

“North Korea aims to pass the buck by raising the possibility of the virus inflow from South Korea,” Hong said. “This is a political calculation to avoid the leader’s responsibility by turning the medical situation into a political issue between the two Koreas.”

Hong viewed that the Kim Jong-un regime seeks to “take advantage of the COVID-19 health crisis by politicizing the issue.”

Hong said that the newly appointed director of the party’s intelligence-gathering and influence-exerting United Front Department, Ri Son-gwon -- who endorses a hard-line approach to South Korea -- could be involved in the state announcement.

Seoul-based experts said that Pyongyang might set the stage to further heighten tensions on the Korean Peninsula.

Yang Moo-jin, a professor at the University of North Korean Studies, echoed the view. But he pointed out that Pyongyang appears to take a cautious approach given that the announcement did not make direct mention of South Korea.

“If North Korea decides to shift responsibility to South Korea, the country is expected to hold a politburo meeting and issue a flurry of statements from the United Front Department, the State Emergency Epidemic Prevention Headquarters, the military leadership, and others, starting with one from Kim Yo-jong (leader Kim Jong-un’s powerful younger sister).”