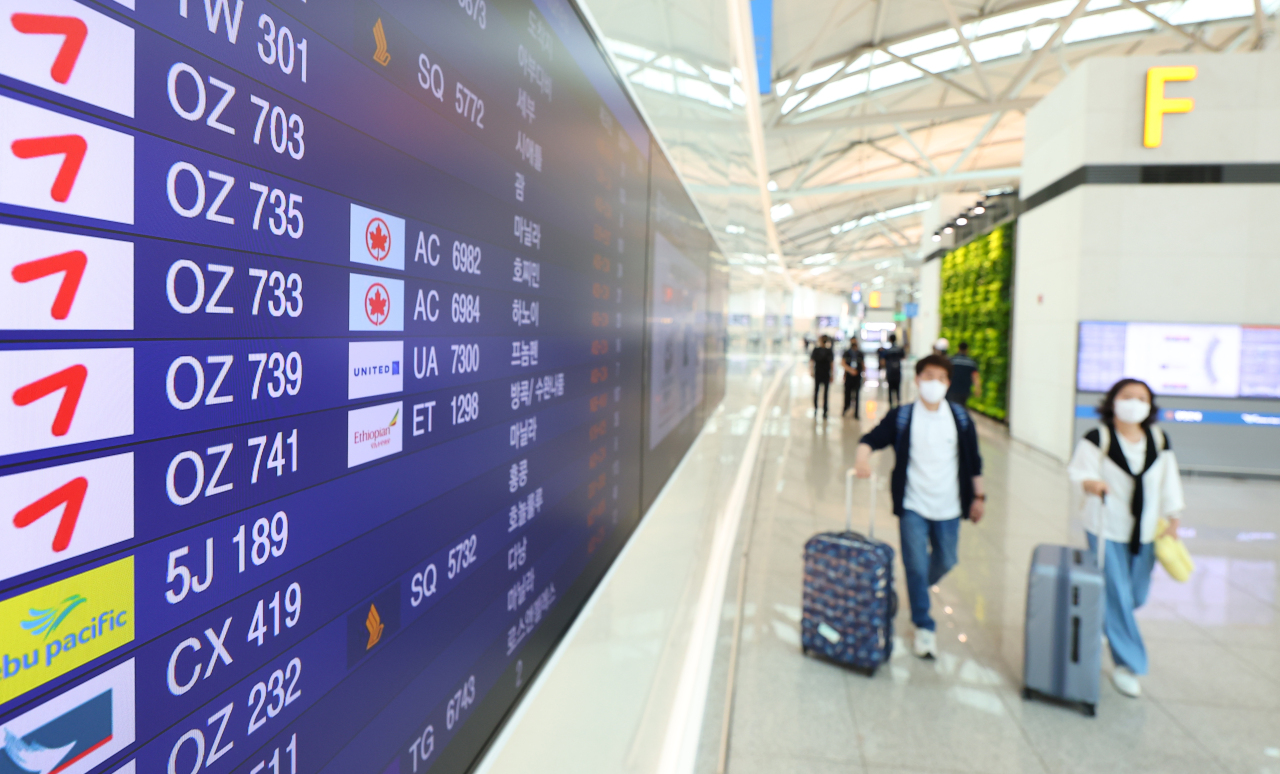 South Korea stopped requiring unvaccinated air travelers to quarantine upon arrival starting June 8. (Yonhap)
South Korea has already stopped quarantining close contacts and arriving travelers. Now the country is mulling whether to follow through with the planned lifting of mandatory isolation for COVID-19 patients in a bid to treat the disease as endemic.

According to official statistics, the COVID-19 situation here has continued to improve since omicron peaked in March.

In the last two weeks ending on Saturday midnight, Korea logged 10,375 cases and 15 deaths each day on average -- down from the daily average of 21,314 cases and 32 deaths seen during the previous two weeks.

The latest simulation by the National Institute for Mathematical Sciences released May 31 showed the downward trend was expected to continue through the end of June. The institute’s modeling team considered factors such as cellphone mobility trends, level of vaccine protection in the population, recent case rates, hospitalizations and death rates to get to the results.

But this simulation did not factor in the termination of quarantine for unvaccinated travelers, nor the possible termination of isolation for patients with active cases.

Starting Wednesday, all inbound air travelers will not have to quarantine regardless of their vaccination status, as part of the government’s post-omicron response plan announced in April. Under the plan, COVID-19’s status as an infectious disease was downgraded from the most threatening to the second-most threatening, removing the legal grounds for many of the previously imposed restrictions.

Korea was supposed to remove the seven-day isolation order for patients last month per the post-omicron timeline, but the government decided to extend it for a month due to concerns over omicron’s subvariants. By June 20 at the earliest, the requirement to isolate may be discontinued -- in which case Koreans will no longer need to isolate or quarantine as a result of COVID-19.

So far, health officials are cautious about enacting the change.

In a press conference on Thursday, the Korea Disease Control and Prevention Agency’s commissioner Peck Kyong-ran raised concerns about dropping the mandatory COVID-19 isolation period. “If we no longer isolate patients, the expected outcome is an increase in infections,” she said, while adding she “recognize(s) a high anticipation for a return to more a normal life.”

Dr. Eom Joong-sik, an infectious disease specialist at a designated COVID-19 hospital in Incheon, cautioned against getting rid of the rules altogether. In a phone call with The Korea Herald, he said: “I think it’s very likely that we’ll see another wave in the latter half of the year, and isolating patients is really the last remaining buffer.”

He worried that reinstating restrictions and soliciting people’s compliance with them in the event of a fall or winter wave would be difficult.

Another infectious disease specialist, Dr. Kim Woo-joo of Korea University Medical Center, said doing away with isolation would not be plausible at hospitals, as that would be exposing non-COVID-19 patients and essential medical workers to risk of infections.

In the aftermath of the omicron surge in April, Korea closed down “community treatment centers” for housing patients with mild to moderate illness so that COVID-19 care is mainly provided in person at clinics and hospitals.

Korea is currently offering fourth vaccine doses to people aged 60 and above, 89 percent of whom have been boosted after completing their primary vaccination series. A fourth dose is not recommended for younger people unless they are clinically vulnerable.

KDCA chief Peck has said that plans for a possible additional round of vaccinations for the general population would be decided based on the circulation of variants and other developments in the pandemic, as well as updates in vaccines. Recently, Moderna announced that its revised vaccine was more effective against omicron than its original.

After omicron rendered existing antibody drugs ineffective, Korea expanded its treatment portfolio to include AstraZeneca’s prevention drug Evusheld. An initial batch of some 5,000 doses is set to arrive sometime in July.