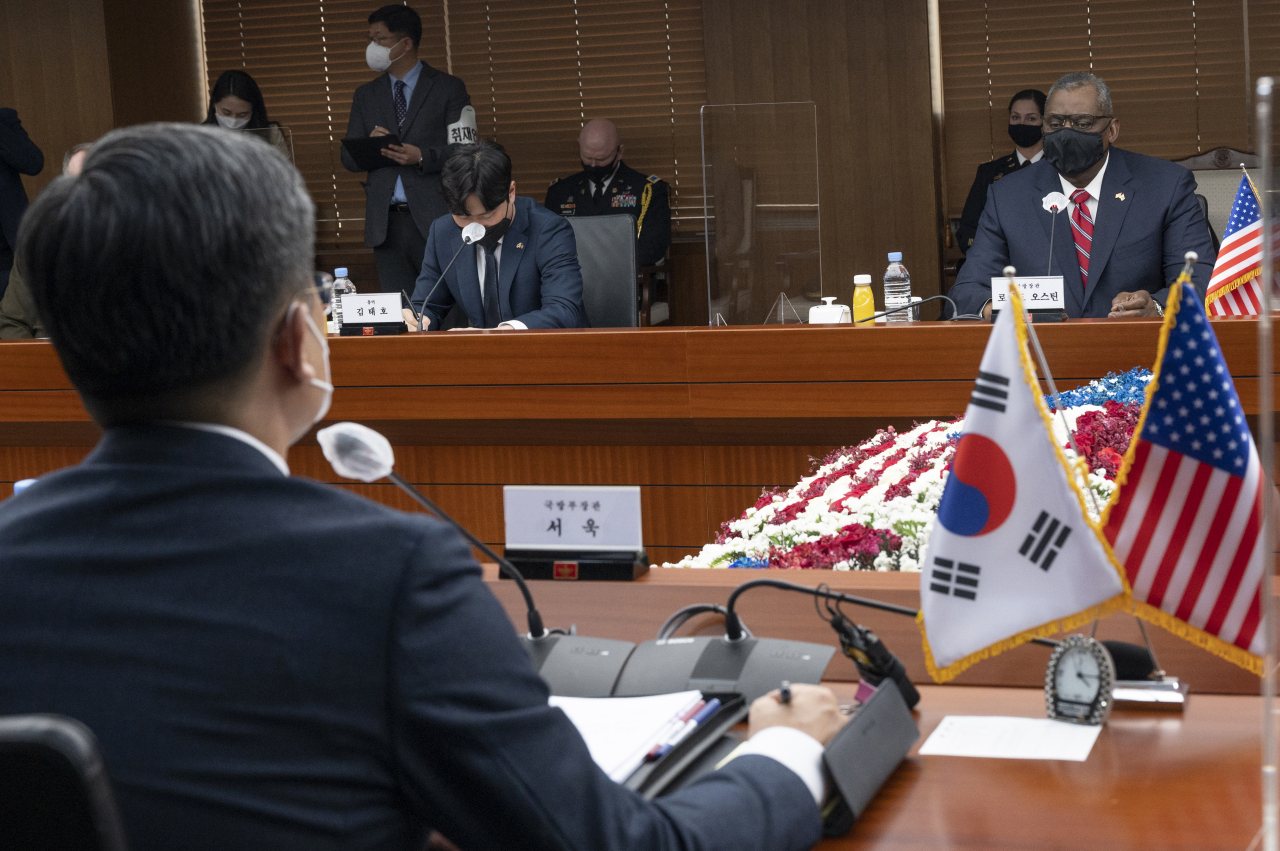 US Secretary of Defense Lloyd Austin meets with South Korea's Defense Minister Suh Wook in Seoul on Mar. 17, 2021. (File Photo - US Department of Defense, Lisa Ferdinando)
South Korean and US defense ministers will discuss a wide range of security and alliance issues, from the transfer of wartime operational control to challenges posed by China and North Korea.

The ROK-US annual defense ministerial talks will be notably held for the first time since the Biden administration took office.

Seoul and Washington will discuss ways to enhance coordination on policy toward North Korea, as well as strengthen their alliance comprehensively and reciprocally in wide-ranging fields such as space and cyberspace, an official at South Korea’s Defense Ministry, who wished to remain anonymous, said Thursday.

During the talks, the South Korean military will also seek to speed up the conditions-based transfer of wartime operational control, or OPCON, explaining its efforts to secure critical military capabilities to lead allied forces.

The meeting will be the last chance for the Moon Jae-in government to take further steps toward its public commitment to expeditiously regain wartime OPCON before his term ends in May, although a complete transition will be impossible to achieve by then.

The key issue is whether Seoul and Washington will advance discussions on the timing of the wartime OPCON transfer. The South Korean official expressed expectations for progress and underscored that prior consultations have proceeded in a “very amicable” manner, unlike last year’s SCM held during the Trump administration.

The official said the joint statement of the 53rd SCM would not carry a negative tone on the issue. But when asked whether the statement will specify the timing of the postponed test of Seoul’s full operational capability, the official said the two countries were still in discussions on the ”sensitive issue.“

The South Korean military must demonstrate it has the core military capabilities required to lead the combined defense posture in the Korean theater in order to retake wartime OPCON, in accordance with the Conditions-based OPCON Transition Plan.

Seoul’s military capabilities have to be verified through a three-stage assessment, which consists of the initial operational capability, full operational capability, and full mission capability in that order. The South Korean and US allies completed the first-stage in 2019, but the two countries have only conducted a rehearsal of the second stage, mainly due to the COVID-19 pandemic.

Overall, South Korea’s Defense Ministry anticipates that the SCM joint statement will contain enhanced US commitment to the defense of South Korea, including the provision of bridging capabilities, compared to last year’s statement.

Seoul expects that Washington is likely to restore the removed clause that reaffirms its commitment to maintain the current level of the US military personnel in South Korea in this year’s joint statement.

South Korea and the US will also seek ways to broaden military cooperation into wider fields including space and cyberspace.

The two countries will specifically discuss when and how to reactivate the now-dormant Cyber Cooperation Working Group and enhance cyber cooperation, the defense official said, adding that Washington has a high interest in the issue.

Seoul also views that China-related issues will be on the agenda at this year’s meeting. In particular, the two countries will come up with ways to promote military cooperation between the US Indo-Pacific Strategy and South Korea’s New Southern Policy and align their regional strategies.

But the official clarified that Seoul and Washington will not discuss the launch of the bilateral defense working group on the matter, denying local media reports.

The Defense Ministry also said that minister Suh will explain Seoul’s position on an end-of-war declaration to the US defense secretary, but the issue is not a formal part of the agenda.

Meanwhile, South Korea’s JCS chairman Won In-choul and his US counterpart Gen. Milley will hold the 46th Military Committee Meeting on Dec. 1 in Seoul, prior to the annual defense ministerial meeting.