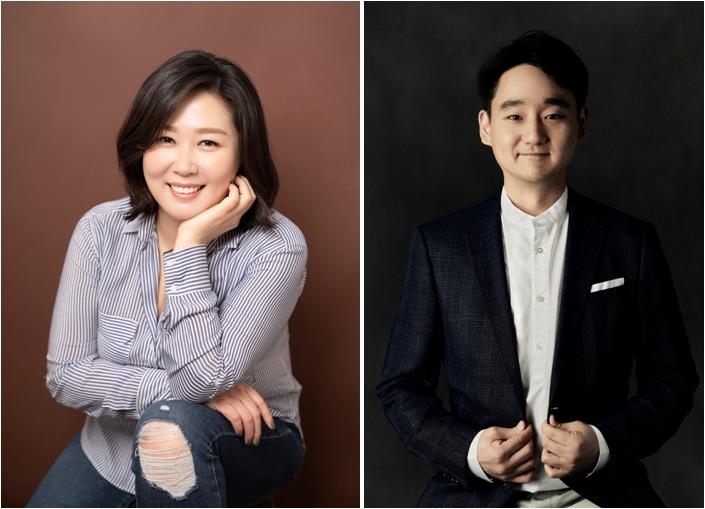 These photos provided by Netflix shows its Vice Presidents Kim Min-young (L) and Kang Dong-han. (Netflix)
US media giant Netflix has promoted two Korean content experts to its senior creative leadership team as part of a strategy to strengthen its foothold in South Korea and the rest of the populous Asian region.

According to Netflix, in a latest leadership reshuffle, Kim Min-young, formerly vice president of content for Korea, was appointed to take charge of content-related operations across Asia, excluding India.

Kim has played a major role in helping the streamer pull off bullish growth in the Korean market, which has emerged as a content hub in Asia, since she joined Netflix in 2016, a year after the company launched its service in the country.

She has picked out a number of global hit TV series and movies, like the historical zombie thriller "Kingdom" (2019), the teen crime drama "Extracurricular" (2020), the monster horror "Sweet Home" (2020) and the space film "Space Sweepers" (2021).

Under her leadership, Netflix increased its investment into Korean projects to $500 million this year alone, compared with $700 million that the company has spent on the Korean market since 2015.

It posted 3.8 million paid subscribers in South Korea at the end of 2020.

At the same time, Kang Dong-han was promoted to vice president of Korean content to take over Kim's position. He has led Netflix's move to expand partnership with local content producers, like CJ ENM and Studio Dragon, and brought their shows, like the smash-hit romantic comedy "Crash Landing On You" (2019) and the dark comedy "Vincenzo" (2021), to Netflix.

Netflix said Kim and Kang are two of the six Asian executives who got promoted in the latest reshuffle.

"It shows Netflix' strong confidence in Korean content and the importance of the Korean market," the US streamer said in a statement. "Netflix is determined to develop quality shows with Korean creators and introduce them to other regions."

The move came as Netflix has been strengthening its first mover's advantage in the Korean market, where its global rivals, like Apple TV+ and Disney+, are expanding their lineups with Korean TV series and shows before launching their services.

Also, Netflix has given more weight to Korean titles, which gain huge popularity in Southeast Asian countries, in a bid to sustain its recent growth amid increasing competition in the region with rivals, such as Disney+ and Amazon Prime, which are also spending more on producing content.

"Over the last two years, we've seen the world falling in love with the incredible Korean content," Netflix CEO Ted Sarandos said in February. "Made in Korea and watched by the world on Netflix." (Yonhap)