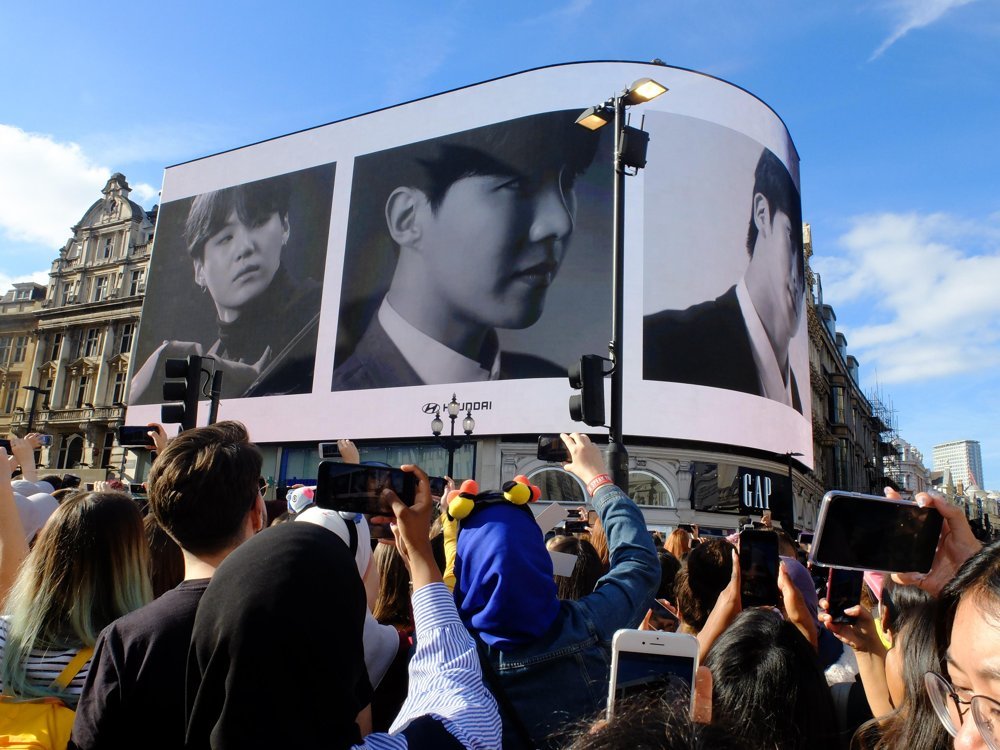 A Hyundai Motor ad featuring BTS appeared on a digital billboard at Piccadilly Circus in London in June 1, 2019. (Yonhap)
BTS’ success in the music industry is fast spilling over into the advertising business as more companies seek a promotional boost from the group and their fans’ social media omnipresence.

The two companies’ posts on Twitter were soon met with a great amount of engagement, prompting memes and racking up over 1 million likes altogether as of Friday.

In a sign that it is part of the group’s fan base known as the BTS Army, the official McDonald’s account now has a purple heart emoji in its bio as well as a little seven at the end of its name. Other household-name company accounts such as those of Guinness World Records, Uno and Barbie have also chimed in under the fast food chain’s viral tweet.

Experts said corporations collaborating with the stars are not just targeting their fans as consumers. Their goal would also include the buzz that they create on social media and beyond.

“When a social media post does numbers, it makes people curious about what it is about and why is trending. And general consumers are inclined to want to feel secure by being in on the buzz, making the advertisement more effective,” said Lee Young-ae, a professor at the Department of Consumer Science at Incheon National University

Social media accounts are a great asset for companies, especially if they are targeting millennial and Gen Z consumers many of whom are heavy social media users.

“In the past, information has been delivered in a one-sided way from corporations to consumers, making the relationships unequal and leaving the information incomplete sometimes. However, social media where consumers can talk and give instant feedback have alleviated those issues,” Lee added.

“With Fila being a global brand with its business in operation across the world, (teaming up with BTS) has been very helpful in raising awareness of our brand in the US and other countries,” a Fila official said of the impact BTS has had on its brand image.

The sportswear brand’s Twitter account, which the company opened in December 2019 after signing a two-year advertising deal with the group, now has over 950,000 followers.

Digital billboard ads featuring BTS are on display outside a department store in Seoul. (Yonhap)
Home appliance maker Coway also saw its YouTube channel grow. The channel which opened in 2009 racked up millions of views within weeks thanks to the new commercials featuring the septet.

Lotte Chilsung Beverage also singed a new deal with BTS in April for its beer brand Kloud following a one-year contract with the group to promote one of its flagship carbonated beverage Chilsung Cider which ended the same month.

The company said tapping BTS again as its brand ambassador model was part of its “aggressive marketing plan.”

The economic impact of BTS’ success, which has been dubbed in Korea as “the BTS effect,” has been foreseen by experts in recent years.

In 2018, a report by the Hyundai Research Institute said the band’s annual production inducement effect -- the total value generated in related industries -- is estimated at 4.14 trillion won.

Another academic report in 2019 from a research team led by Pyun Ju-hyun, a business professor at Seoul‘s Korea University, said the group’s three-day shows in Seoul created an economic effect worth 1 trillion won.