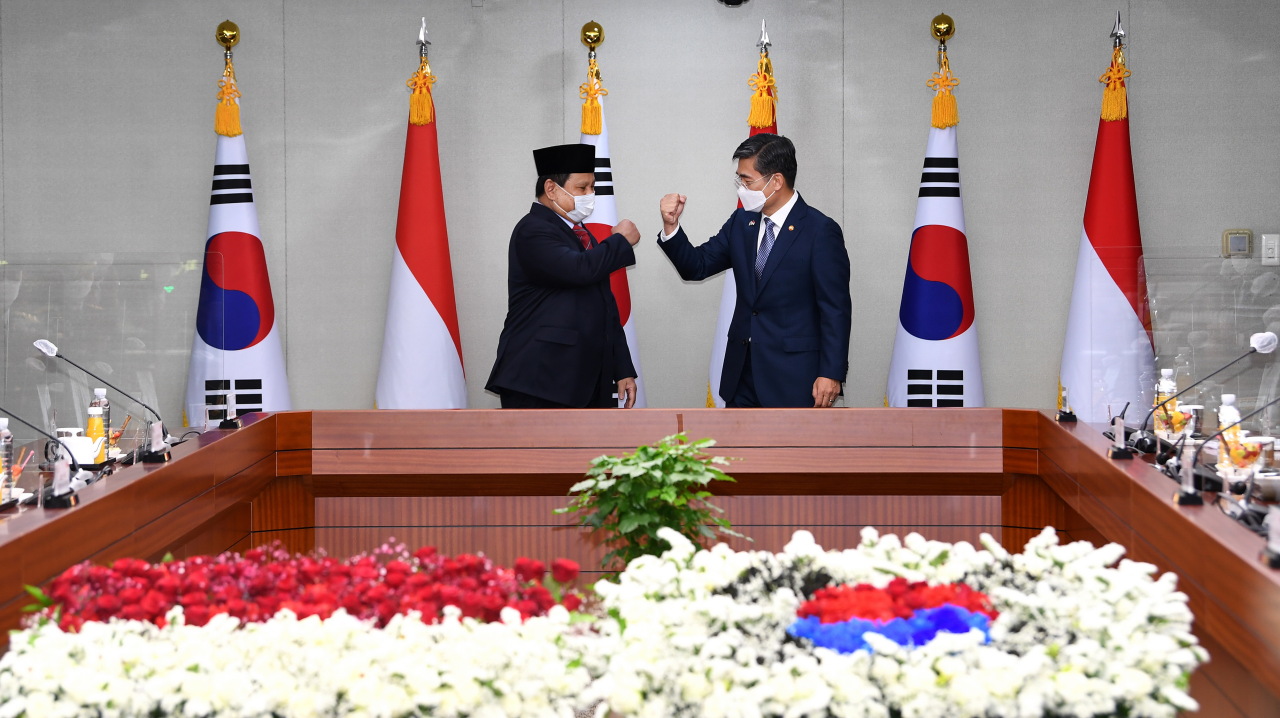 Defense Ministers Suh Wook (right) and Prabowo Subianto do a fist bump before their talks in Seoul, Thursday. (Ministry of National Defense)
The South Korean and Indonesian defense chiefs said that their deal to build Korea’s first homegrown fighter jets together represents a relationship based on trust, and that they should build on the legacy to expand exchanges, at a face-to-face meeting in Seoul on Thursday.

The KF-X program, in which Indonesia seeks a 20 percent share and technology know-how while Korea holds the rest, is set to reveal its prototype jet early this month -- but Indonesia has so far paid just $22 million, about 13 percent of what it owes. Economic difficulties are reportedly among the reasons.

The two said they will make what they call a “special, strategic partnership” stronger as they work together on military technologies and seek cooperation on regional security. A senior-level talk involving key defense and foreign officials from both countries will open soon, they added.

Later in the day, Prabowo met with President Moon Jae-in, who reaffirmed the unique relationship between Korea and Indonesia, which is the only country in Asia with which Seoul maintains a strategic partnership.

“The joint work to build fighter jets demonstrates the highest levels of trust between the two governments, and we met today to follow through on that commitment,” Moon said. Prabowo responded to Moon with the promise that he would help forge stronger ties.

Indonesia, which joined the KF-X program in 2010, has reportedly asked Korea to either cut its burden in half or approve a loan for its contributions to the project and help build local production lines.

The Korean government, which denies it has received any such request, said the two governments are in talks to work out the dispute, adding the program will not be affected by Indonesia’s pullout.