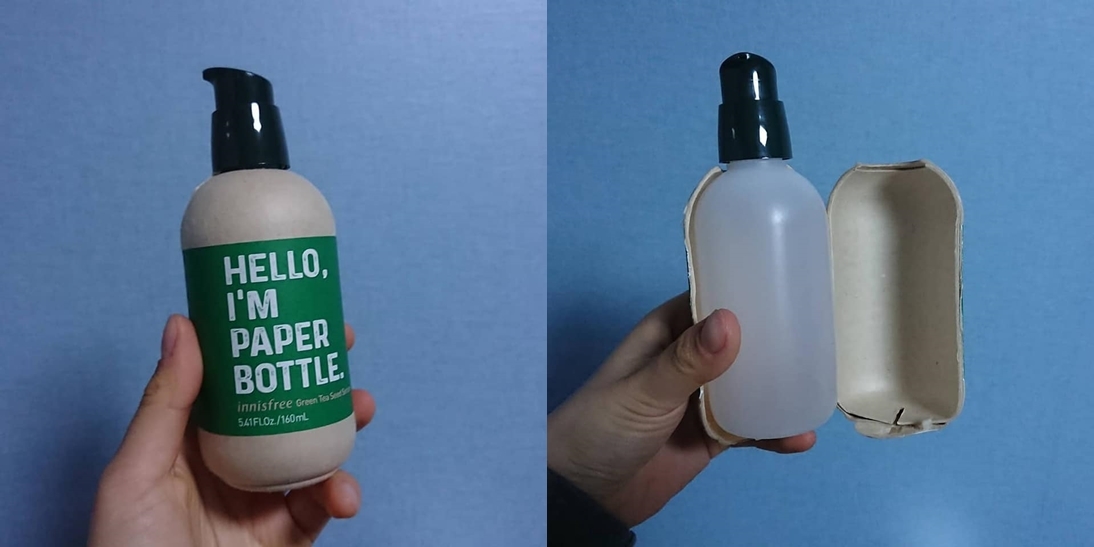 Innisfree’s plastic bottle covered with a “Hello, I’m Paper Bottle“ label. (Capture from Facebook group No Plastic Shopping)
Innisfree, a cosmetic brand under Amorepacific, has been forced to clarify its eco-friendly “paper bottle” packaging after a customer’s complaint about plastic usage and a “misleading” label went viral online.

In a post on a Facebook group called “No Plastic Shopping,” a customer shared photos of what is inside the package for the brand’s face serum product after cutting the bottle in half. Despite the label reading “Hello, I‘m Paper Bottle,” the product turned out to be a plastic bottle simply wrapped in paper.

“I felt betrayed when finding out that the paper bottle product was a plastic bottle,” the post read.

The user also filed an official complaint to a consumer center against the given product’s so-called “green washing” labeling.

The post prompted scores of comments from angry consumers and has been picked up by several local media outlets since it was uploaded earlier this week.

Following the backlash, the brand has hurriedly acknowledged that the label “Hello, I’m Paper Bottle” may be misleading.

“We used the term ‘paper bottle’ to explain the role of the paper label surrounding the bottle,” Innisfree said in a statement.

“We overlooked the possibility that the naming could mislead people to think the whole packaging is made of paper. We apologize for failing to deliver information in a precise way,” the brand said.

But when it comes to the controversial bottle, Innisfree asserted that the colorless plastic bottle is recyclable and eco-friendly as it uses 51.8 percent less plastic than conventional packaging.

It also added that the paper bottle packaging -- which had come in line with a limited edition Green Tea Seed Serum -- provided users with information on how to separate and recycle.

The consumer who posted the complaint, wishing to remain anonymous, told The Korea Herald that the company’s defensive explanation and belated response were “insufficient.”

“Many of those who chose the given product were trying to reduce harmful impacts to the environment. I feel that (the company) took advantage of them (through misleding marketing).”

The consumer also said that the company could have used alternative expressions such as “half plastic” or “light plastic” in order to prevent misinterpretation.