As the prices of Bitcoin and other cryptocurrencies approach record highs, digital currency exchanges are reaping the benefits of increased traffic, but are simultaneously burdened with security concerns. Domestic crypto exchanges said Tuesday that they are ramping up alert levels amid an uptick in interest and the establishment of new laws.

Earlier this month, the top two local digital currency exchanges, Upbit and Bithumb, suffered server shutdowns amid increased transactions. Bithumb’s server was down for two hours on Feb. 1 as traders rushed to sell Ripple, whose price halved in a matter of hours. On Saturday Upbit’s server was also briefly brought down by an unusually high number of transactions as Bitcoin prices rallied. Korbit, one of the country’s four largest trading platforms along with Upbit, Bithumb and Coinone, reported a server error Jan. 11.

In addition to server glitches, digital coin platforms have been issuing fraud alerts. Bithumb issued a staunch warning earlier this month, indicating that it would respond strongly to any illegal brokers impersonating the exchange’s listing team and extorting high listing fees. The exchange revealed that it had received emails recently from potential victims of these scams. 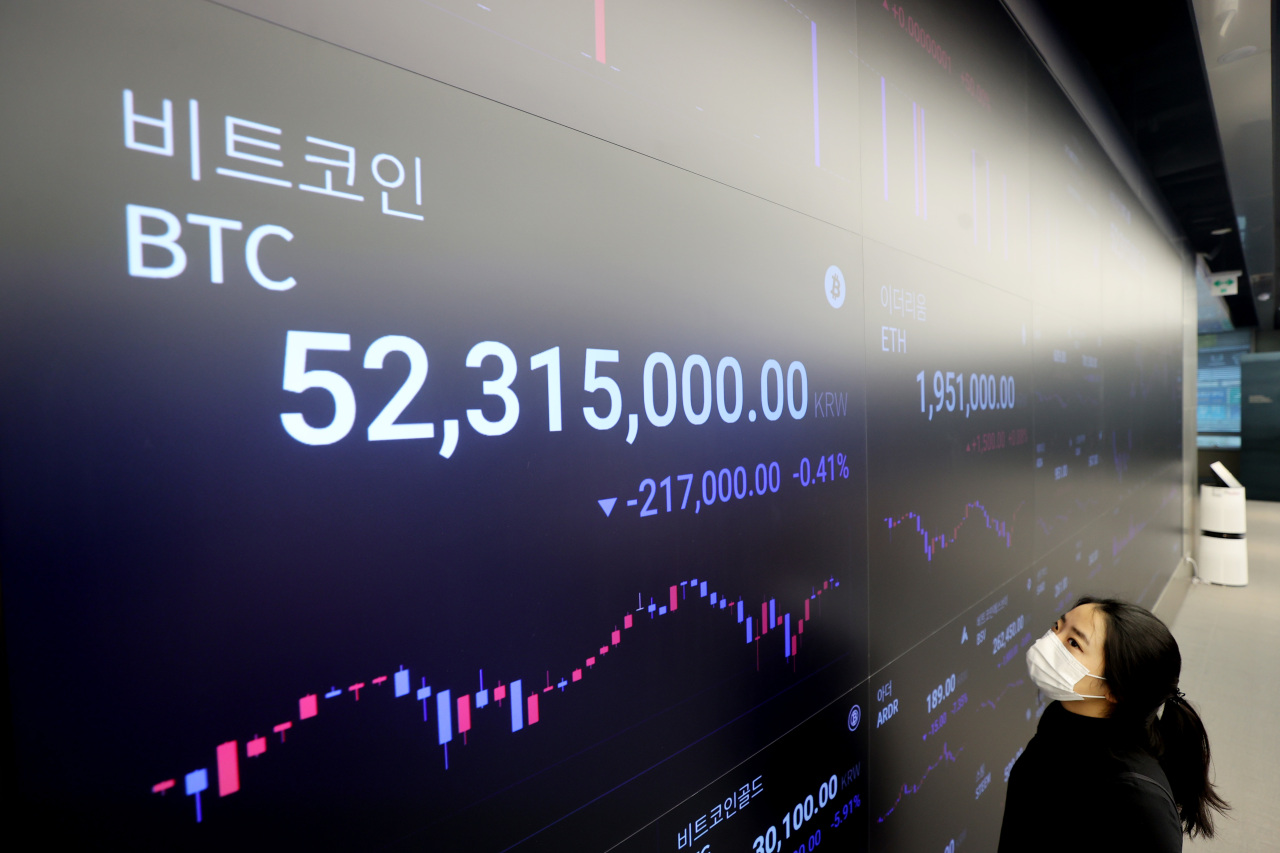 An electronic board displays the price of bitcoin at crypto exchange Upbit in Seoul on Tuesday morning. (Yonhap)

Upbit on Tuesday said it had refunded about 1.3 billion won ($1.1 million) last year in 60 phishing cases out of an undisclosed number of reports, even though cryptocurrency exchanges had no obligation to compensate their customers.

Starting Nov. 20, financial companies including crypto exchanges have to refund scam victims for amounts as low as 10,000 won pursuant to the Special Act on the Prevention of Loss Caused by Telecommunications-based Financial Fraud and Refund for Loss.

“We are adopting various methods to prevent investors from being harmed by financial fraud by operating a 24-hour deposit and withdrawal monitoring system and disclosing financial fraud cases,” an Upbit official said. “At the same time, new legislation to be imposed on cryptocurrencies are expected to reinforce the security of exchanges,” the official added.

Set to take effect in March, the revision to the Specific Financial Transactions Act adds crypto exchanges to the list of financial organizations that are obliged to adopt information security management systems and real-name accounts as well as anti-money-laundering measures.

The law is being redrafted to take a toll on smaller digital coin exchanges but give chances to those who have resource to build fortified security measures.

“No one knows how many cryptocurrency exchanges are out there, but the revision of the Specific Financial Transactions act will provide a safer environment for customers and we will try our best to maintain sound trading conditions,” said a public relations representative from Bithumb.

On Monday, Bitcoin soared to almost $50,000 before falling below $49,000, according to Coindesk. In South Korea, the largest digital coin was being traded above 54 million won in afternoon trade on Tuesday, Upbit data showed.  (gypark@heraldcorp.com)