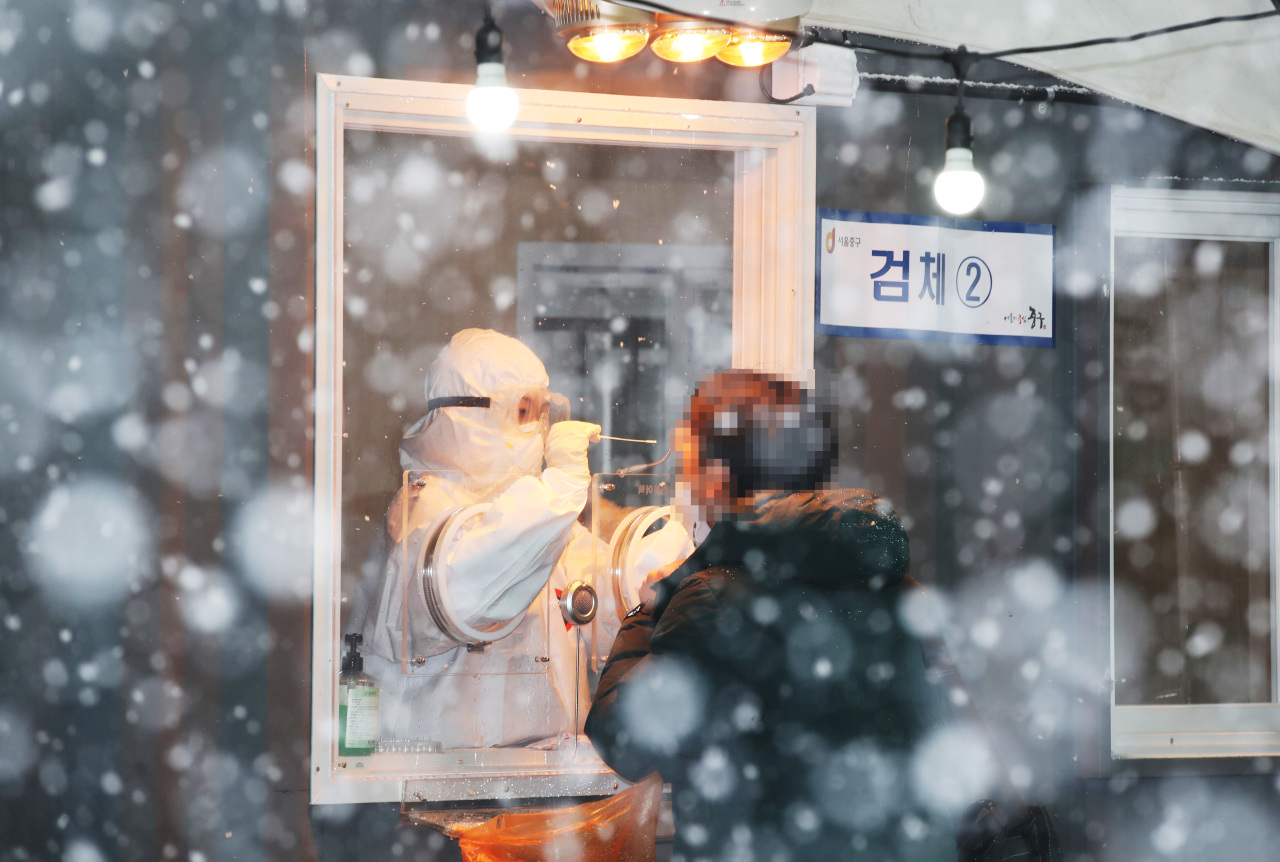 A medical worker collect specimens for coronavirus testing at a makeshift clinic in front of Seoul Station on Tuesday. (Yonhap)
The number of new coronavirus cases in South Korea remained in the 500 range for the second day in a row Wednesday, indicating that the third wave of the pandemic is possibly heading for a marked slowdown after a peak on the back of monthlong tougher virus curbs.

The country added 562 more COVID-19 cases, including 536 local infections, raising the total caseload to 70,212, according to the Korea Disease Control and Prevention Agency (KDCA).

The total caseload surpassed the 70,000 mark since the first confirmed case was reported in the country on Jan. 20, 2020, the KDCA said.

Wednesday's daily caseload is slightly up from 537 recorded a day earlier.

The daily number of new cases has remained below the 1,000 mark this month except for two days, the KDCA said.

A total of 593 new COVID-19 cases was added over the past week, sharply down from 833 during the same period a week earlier, the authorities said.

The country has enforced the Level 2.5 social distancing scheme, which is the second highest in the country's five-tier scheme, in the greater Seoul area and Level 2 rules in other areas since Dec. 8. Health authorities extended the measures until Sunday.

Private gatherings of five or more people are banned across the nation during the extended period.

Restaurants and high-risk entertainment venues, including bars, clubs and karaoke establishments, in the Seoul metropolitan area will be allowed to conditionally reopen when the current Level 2.5 measures expire.

The authorities, however, remained cautious about immediately lifting the ban on business at high-risk entertainment facilities that have been complained of business impact.

They will decide whether to lower or maintain the social distancing level Saturday.

Despite the apparent downward trend, health authorities have been vigilant against a new virus variant that was first reported in Britain and a continued rise in cluster infections.

The country has reported 16 variant cases. The authorities extended the ban on passenger flights departing from Britain until Jan. 21.

Of the locally transmitted cases, the capital city of Seoul accounted for 148 cases, and the surrounding Gyeonggi Province took up 189. Incheon, west of Seoul, had 20 new cases. The greater Seoul area accounts for around half of the nation's population.

By cluster infection, a detention center in eastern Seoul reported 18 more cases, bringing the total to 1,214 patients since the first confirmed case on Nov. 27, KDCA said.

A nursing hospital in the southern city of Suncheon reported 10 cases, bringing the total caseload to 106, it said.

A praying facility in Jinju added 35 more COVID-19 patients, bringing the total to 73, they said.

A total of 576 cases across the nation was linked to an evangelical church in the central city of Sangju, KDCA said.

The country' state health insurer earlier said that it plans to seek reimbursement from the church for treatment costs of COVID-19 patients linked to it for allegedly hindering infection prevention efforts.

In addition, senior homes, hospitals and religious facilities across the nation have reported additional cases.

Among the confirmed cases, 26 were imported from abroad, slightly down from 29 a day earlier.

The number of seriously or critically ill COVID-19 patients came to 374, down 16 from a day earlier.

South Korea added 20 more deaths Wednesday, raising the total to 1,185, according to the authorities.

The fatality rate came to 1.69 percent.

The total number of people released from quarantine after making full recoveries was up 1,067 from the previous day to reach 54,636. (Yonhap)