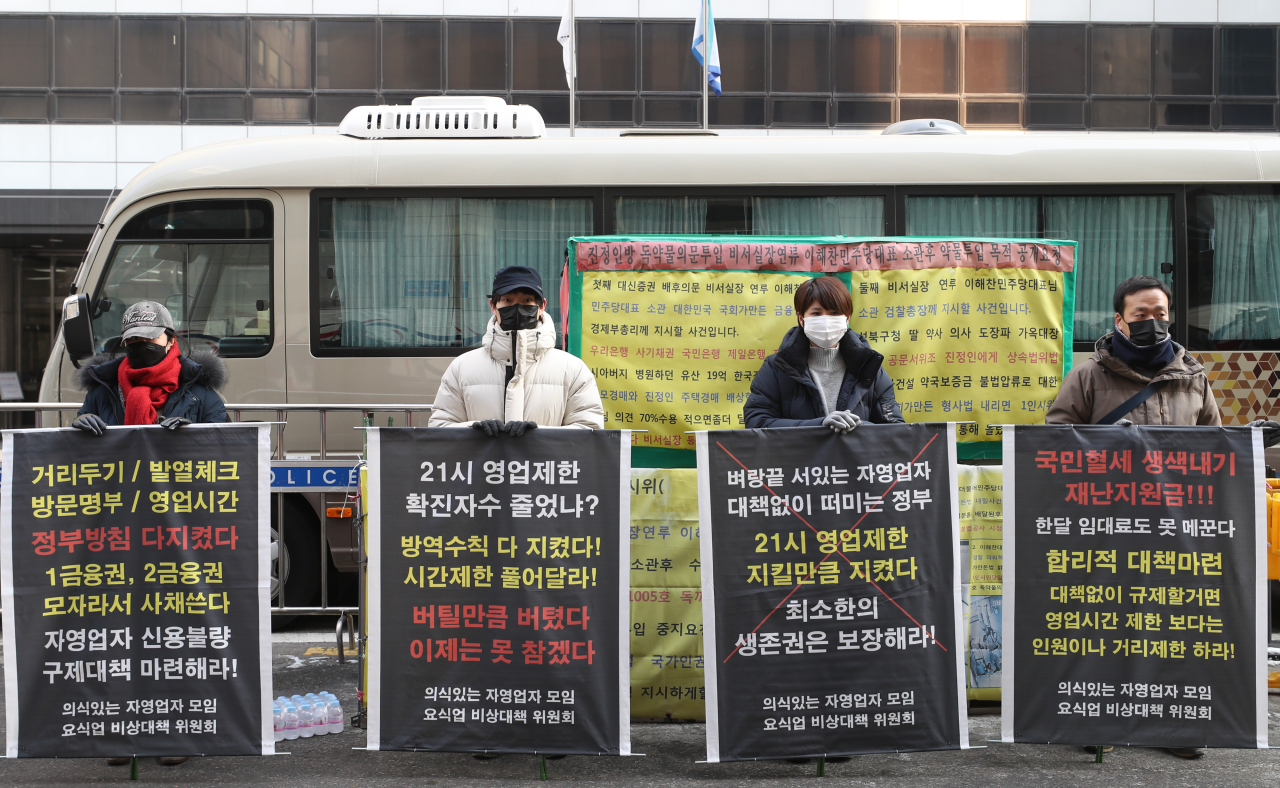 Members of a coalition for the rights of restaurant businesses stage a protest Tuesday near the headquarters of the ruling Democratic Party of Korea in Yeouido, western Seoul, to demand the government remove the 9 p.m. operations curfew under COVID-19 social distancing rules. (Yonhap)
Small business owners are taking legal action against the government, calling the social distancing rules unfair and saying the restrictions have greatly diminished their chances of economic survival.

On Monday, a group representing coffee shop owners in South Korea announced that around 200 of its members would lodge a suit against the government later this week demanding compensation for business lost as a result of the government’s social distancing rules.

In the suit, to be filed with the Seoul Central District Court on Thursday, the group said it would demand a total of 10 billion won ($9.1 million) in damages.

Since late November, when Level 2 distancing rules -- the third highest in the country’s five-tier COVID-19 alert system -- were imposed in Seoul, Incheon and Gyeonggi Province, coffee shops in the capital region have been barred from providing dine-in services.

That restriction was extended to coffee shops in other parts of the country in early December, when the government imposed Level 2.5 distancing rules in the capital region and Level 2 rules for the rest of the country.

“We are filing this lawsuit out of desperation as the government’s COVID-19 regulations have put our lives on the edge,” said Ko Jang-soo, head of a cafe owners’ association. “We ask the government to prepare fair and consistent measures.”

Cafe owners are not the only ones who have taken issue with the distancing guidelines.

According to a survey of 1,018 small businesses carried out by the Korean Federation of Micro Enterprises in November, 70.8 percent of the respondents said their 2020 sales had dropped from a year earlier, with the average loss estimated at 37.4 percent.

Some 53.5 percent of respondents found the government’s support insufficient, with nearly half among them calling it a temporary solution.

Since last week, many owners of coffee shops, bars and internet cafes have staged protests against the government. Operators of indoor sports facilities were the first to start the movement after an apparent suicide of a gym owner in Daegu who was experiencing financial difficulties.

They argue that their businesses should not face tougher restrictions than restaurants, which are still allowed to offer dining in. The restrictions have pushed consumers away and left owners with debts piling up, they say.

“I pay around 10 million won in operation fees for the fitness club, and with the COVID-19 pandemic, I am now left with 1.9 million won in my bank account and 90 million won in bank debt,” said Oh Sung-young, head of a gym owners’ association, in a Facebook post Thursday.

Another group representing owners of indoor fitness centers filed a lawsuit with 203 plaintiffs at the Seoul Western District Court on Tuesday, demanding 5 million won for each gym owner involved.

The group filed a separate lawsuit against the government last month seeking 765 million won in compensation for losses as a result of imposed social distancing rules.

Businesses argue that the government has not done proper research into the steps small merchants have taken to prevent the spread of the coronavirus within their facilities.

A number of cafes have spaced out their tables to ensure appropriate distance between customers, and gym owners have installed dividers between exercise machines to prevent droplets from passing from one person to one another.

Some owners bought extra hand sanitizers and cleaning supplies to ensure safety for customers, only to later find out that the government banned eating in entirely.

“I simply wasted my own precious money to buy all these useless plastic dividers that are now covered in dust,” said an independent cafe owner in Gangnam District, southern Seoul, who wished to remain anonymous.

“Nobody is going to pay me back for the dividers, I get that. But the only thing I want from politicians and civil workers is for them to just actually visit the businesses that are in trouble and learn how much effort we have made to follow virus control measures reasonably.”

In response, the government and the ruling Democratic Party pledged to come up with additional steps to help small businesses recoup their losses.

“Our hearts are heavy listening to these desperate cries from small business owners and proprietors in sectors that have been suspended or have operation restrictions,” said Democratic Party Floor Leader Kim Tae-nyeon in a party meeting Monday.

“The Democratic Party and the government will not turn away from the pain of small merchants and concentrate all of our policy efforts to provide support.”

The country on Monday started its third emergency cash relief program, offering up to 3 million won each for around 2.5 million small business owners, freelancers and contract laborers. The ruling party is also mulling to push for another round of country-wide disaster relief funds.