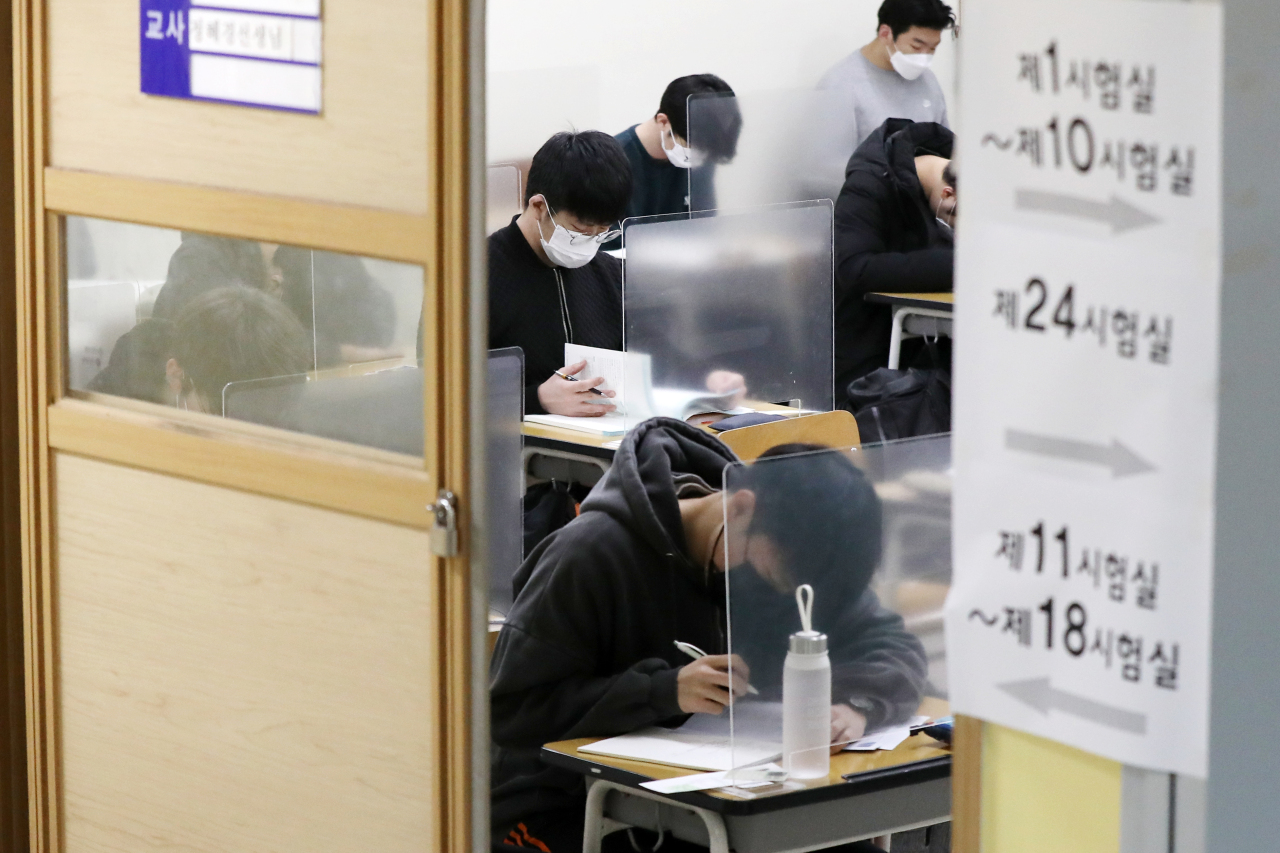 Students at a testing center in Jongno-gu, central Seoul, review study materials Thursday morning just minutes prior to taking this year's College Scholastic Aptitude Test. (Joint Press Corp.)
Tens of thousands of college hopefuls sat the national college entrance exam Thursday, which could determine not only which universities they will attend, but many aspects of their future.

The relentless resurgence of the COVID-19 outbreak brought changes to this year’s College Scholastic Aptitude Test, better known as the Suneung here, but some things have stayed the same.

The usual scenes of crowds cheering in front of testing centers were nowhere to be seen Thursday morning, with stringent social distancing rules in place nationwide.

Examinees, many escorted by parents, arrived with face masks on, hugged family members and took pictures with friends before entering testing centers.

They then had their body temperature checked before entering the exam rooms, where plastic dividers were installed at each desk. They were not allowed to switch seats during lunchtime.

Of those who did show up, 45 were COVID-19 patients and 456 were self-isolators.

“In Seoul, a total of 16 confirmed COVID-19 patients are currently taking the Suneung at the Seoul Medical Center and the Namsan treatment center, including one who was diagnosed in the early hours of Thursday,” the Seoul Metropolitan Government announced.

There were four such cases across the country in which examinees were diagnosed at the last minute but were still allowed to take the exam at designated hospitals, the ministry said.

Some 160 test-takers who exhibited COVID-19-like symptoms at testing sites were assigned to special exam rooms to be separated from others.

In Daejeon, 19 proctors were urgently replaced Thursday morning after one proctor was confirmed to have the virus Wednesday.

As in previous years, the whole country supported the test-takers. Extra buses, subway trains and taxis were mobilized, and flights were grounded during the English listening test.

Police were also on standby for test-takers in need of help. The National Police Agency said they had received 620 calls for support Thursday in regards to the Suneung, about 75 percent of which were requests for a ride. Some 4.4 percent of calls were about lost identification slips.

The difficulty level of this year’s Suneung was similar to previous years, the chief of the exam board said.

“From analyzing mock tests in June and September, we found no striking difference from previous years in terms of achievement gap between high school seniors and graduates, as well as score distribution among students,” said Min Chan-hong, a policy studies professor at Hanyang University who heads this year’s Suneung committee.

“We tried to be careful and make this year’s exam not too difficult, avoiding making any super-difficult questions.”

The Suneung was considered a major challenge to the country’s precarious virus situation. The country counted 540 new cases in the 24 hours ending at midnight Wednesday, with officials saying infections show no sign of abating.

This year’s exam was postponed by two weeks from its original date due to the COVID-19 pandemic.

Even after Thursday’s national exam, risks will linger, as the college admissions process will officially kick off following the exam. The Health Ministry asked test-takers not to irresponsibly celebrate after the exam.

“We want to recognize (test-takers) for their academic efforts,” said Health Ministry spokesperson Son Young-rae in a press briefing Thursday.

“But we advise them to refrain from holding gatherings or engaging in long conversations with friends in enclosed restaurants and cafes after the Suneung is over.”

Official test scores will be made available Dec. 23.

A number of universities will begin the admissions process in earnest, running written tests as early as this weekend. The Education Ministry asked universities in regions under Level 2 social distancing rules to refrain from administering in-person tests and interviews.