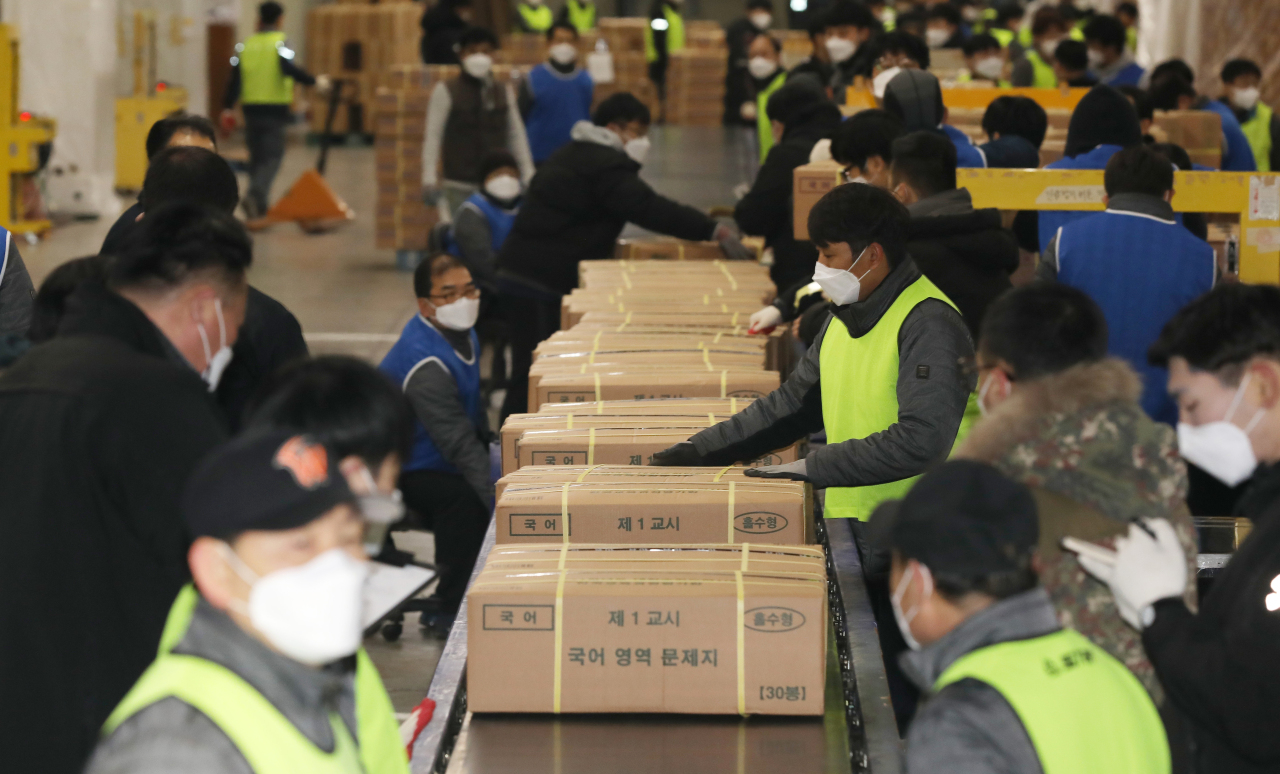 Officials prepare boxes containing test papers at a printing factory in Sejong on Monday to be delivered to local test administration authorities for Thursday‘s national college entrance exam. (Yonhap)
South Korea on Monday entered the final phase of preparation for Thursday’s annual college entrance exam, to be held amid a relentless resurgence of the new coronavirus.

Test papers and answer sheets started to be delivered to 86 local test administration authorities across the country Monday, according to the Education Ministry.

Over 400 government officials, escorted by police guards, were to ship the test materials by Wednesday for them to be distributed to 1,381 testing sites on the early morning of the exam date.

From 8:40 a.m. to 5:40 p.m. that day, some 493,433 college hopefuls will sit the back-to-back marathon tests, in what President Moon Jae-in described as a bigger test to the country’s battle against the COVID-19 pandemic than April’s general elections.

“The Suneung, as it takes place in small, enclosed spaces, entails bigger risks in terms of virus control,” the president said in a meeting Sunday to check up on Suneung preparations.

The parliamentary elections were closely watched by the world as the first mid-pandemic polls and were hailed as a model for other countries, as no related cases of COVID-19 were reported despite the highest voter turnout in 28 years.

“As many countries postponed their college entrance exams, foreign media outlets are showing immense interest in our Suneung exam,” Moon continued. “I ask education authorities to stay focused until the very end and thoroughly prepare.”

Unlike in April, when the country was in the wake of the first wave of COVID-19 and was making clear progress in flattening the virus curve, the nationwide exam is taking place amid a deepening sense of crisis.

Experts say the country could be headed for the “worst yet” wave of infections.

It added 438 more COVID-19 cases in 24 hours ending midnight Sunday, the second day of fewer than 500 cases, attributable to less testing being carried out on weekends. The daily tally of cases remained over 500 late last week, reaching 581 on Thursday.

The number of test-takers confirmed with the virus is also growing. In Seoul alone, a total of 12 have tested positive for COVID-19 as of Monday, and 57 others have been under home quarantine for potential exposure.

A nationwide tally from Nov. 26 shows at least 20 are confirmed patients and 144 are under isolation.

Even if the virus situation deteriorates further, postponing the test is out of question, the authorities said. They have made preparations to allow even confirmed patients and those under quarantine to sit the test, they stressed.

“Pushing the Suneung back to any later date could cause immense disruptions to the college admissions process,” an Education Ministry official said. “Even more, such delay would be undermining the efforts that students poured in for a whole year for the very date.”

All high school classes switched to online in the week leading up to the exam in order to minimize transmission risks among students. Many cram schools and private institutes also transitioned to online classes under the Education Ministry’s guidelines.

Aside from antivirus measures, the country is making special arrangements to support test-takers in every possible way, as in previous years.

They range from more buses and subway trains to the suspension of flights taking off or landing during the English listening test and a one-hour delay in the nation’s stock market opening.

Local governments will run more buses, taxis and subway trains Thursday morning to help students get to their testing sites on time. The Seoul city government said it will also prepare 729 vehicles to give rides upon request.

The police will dispatch 7,600 officers and 5,302 volunteers to manage traffic near each Suneung testing site. Ambulances will be ready to escort test-takers under quarantine or those with COVID-19 symptoms to their designated testing sites.

During the listening section of the English test, which runs from 1:10 p.m. to 1:35 p.m., all flights will be barred from taking off or landing, and military exercises that can cause noise will be suspended.

The Korea Exchange said the Korean financial markets will open trading an hour later than usual, at 10 a.m., and close at 4:30 p.m.

Local public health centers will run until 10 p.m. Wednesday as opposed to the usual closing time of 6 p.m. to provide COVID-19 checks for test-takers before their official test date.

Regional education offices, the Education Ministry and disease control authorities will be on standby Wednesday to meet any emergency needs.

On test day, mask-wearing will be mandatory for test-takers and proctors throughout the exam and body temperature checks will be conducted on everyone entering the testing sites.